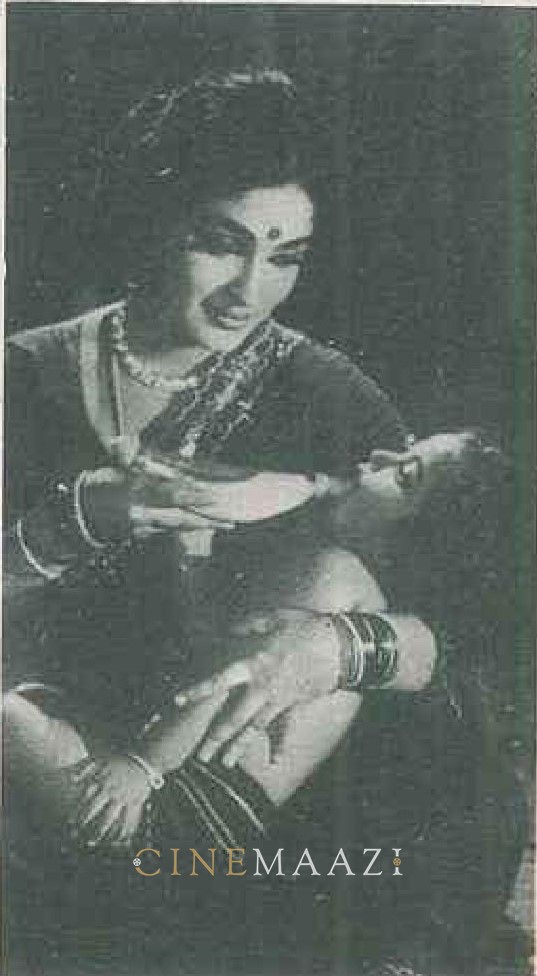 Devika in the tender role of a mother in Sreekant Productions' "Pinni".
The Telugu film industry is in the doldrums. Some sort of voodoo seems to have overtaken what was once in the first rank of Indian films. Nothing seems to succeed top marquee names, lavish budgets, new approaches — all these have failed to induce the Telugu public to give the generous patronage it had extended earlier to the efforts of the same producers, directors and stars.

It is not that the people of Andhra have suddenly developed a way of life which has no place for such trivialities as films. They continue to see them in large numbers, but they prefer to see Tamil and Kannada movies dubbed in Telugu. They only reject original Telugu films. They seem to find the dubbed films more attractive than the original Productions of their own film makers.

This has now developed into a major threat for the Telugu industry. The producers of Andhra are now up in arms against this menace to their prosperity or even survival. They accused the invasion of dubbed films as the cause for the failure of their products. Of course, there is the possibility that the public patronises the dubbed films not because of some mysterious antagonism towards the work of their own producers but for the much more likely reason that they find the films made by Telugu producers insipid.


Whatever the justification for this phenomenon, Telugu film makers are on the warpath and their campaign against dubbed films is gaining momentum and getting results. They have persuaded distributors in Andhra not to finance any dubbing of non-Telugu films after honouring their present commitments.
Of course, a temporary bad patch should not be allowed to compel film producers of Andhra to close down their units and thus liquidate an industry with such an illustrious heritage as the Telugu industry has. But the producers must also realise that the way to survival is not by denying the public of Andhra good films from outside, but by giving them better home-made products.

Amidst this dreary picture of failure, frustration and disappointment, the Andhra public is expecting a really good film from director Pratyagatma who enjoys a very high reputation in Andhra as a distinguished maker of good films. His earlier productions. "Bharya Bhartalu", "Kula Got-ralu" and "Punarjanma" are classics of the Telugu screen. His recent "Chilaka Gorinka", it is true, was not a box office hit, but then it was largely because it was too high-brow for the Masses.

He is directing the Telugu version of "Chota Bhai" for Vasu Films which has gone on the sets recently. Krishna Kumari and Kanta Rao are playing the lead roles. Aswathama tunes the music for Dasaratha's lyrics. Maddipatla wrote the dialogue and the director himself wrote the script. It is going to be a quickie and is expected to be released in February.


The Telugu film industry is known for the way the unexpected happens with the regularity of the usual. The latest in this genre is the news that G. Varalakshmi, a star of yesteryear and durable supporting star of today, has entered the directorial field in a big way. She is directing a social for Chandrasekhar Films and, not only that, she has also written the story and the dialogue. Handsome newcomer Raj Kumar plays the role of the hero a dumb boy who makes good.

A picture which promises to be a triumph for the Telugu film industry is "Paola Rangadu" being produced in Hyderabad by Annapoorna Pictures who have given us so many good films before. Andhra's leading matinee idol, Nageswara Rao, and talented beauty Jamuna play the leading roles. Veteran Adurthi Subba Rao is directing the movie for producer Madhusudana Rao.

The year of 1966 has largely been a lean year for the Telugu film industry a picture of gloom relieved by a few bright patches. But the industry is too rich in earlier success and achievement to be bogged in frustration for any length of time. It has too many brilliant and dedicated men and women serving it to accept defeat tamely or easily. Its glorious past is a guarantee of its future prossperity.
***
This article was first published in Star & Style magazine, in its 1967 February 1 edition.
143 views