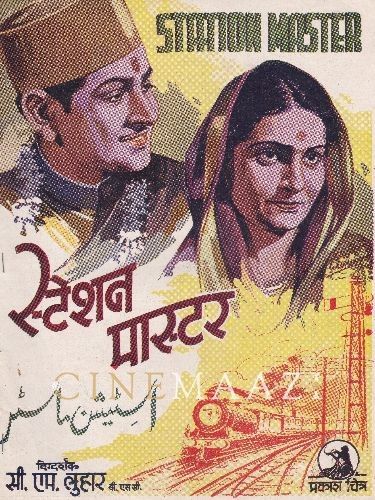 Here is a story that could have become a memorable picture of the life of our railway people had the director and writers exercised a little more imagination and taken a little more care in developing and presenting the sequences.

The idea of showing the day to day routine of our railway people, their little smiles and sighs, their petty intrigues and politics, their backyard romances and unglamorous duties, their big responsibilities and minor ambitions, was a brilliant one and the unexpected success of the picture at the box-offices secured public endorsement for the idea but the critics still longed to see what the picture would have been had the details been attended to more thoroughly.

As it is "Station Master" (1942) provides a rather lengthy entertainment with the help of a human and interesting story.

Parmanand (Jagdish) is a station master at a wayside station. He has a grown-up daughter Usha (Ratna-mala) and the station master is a bit worried about her marriage. Arun (Prem Adib) is a guard on the railway.

More characters are introduced in Manek Babu (Jiwan) a head clerk with a cranky daughter, Shyama (Kaushalya). Manek Babu is anxious to secure Guard Arun for a son-in-law.

In Kalicharan (Shakir) a signal-man and Sona (Amir Bai) his wife, two very affectionate types are introduced. They are devoted to the Station Master and form a very influential part of his little world.

The story moves forward on a marriage tangle. Guard Arun and Usha fall in love with each other and are seen together very often and are seen together very often. But Manek Babu, the head clerk, wanting Arun for his own son-in-law, arranges the engagement of Usha to Niranjan Babu (Umakant), a railway official. Finding that things don't go the way he would like to, Manek Babu starts acting funny and very soon poor Usha is in trouble, being weighed down by whispers and scandal about Arun. Usha's mental grief worries the Station Master who loves his motherless daughter very dearly.

One day, he comes to his duties with a very disturbed state of mind and owing to his listlessness becomes the cause of a train collision.

An inquiry into the accident is conducted and the Station Master is acquitted of all blame in spite of all efforts of Manek Babu to involve him.

By this time, however, Naranjan Babu, the chosen bridegroom, discovers that love of Usha for Guard Arun and very graciously brings together the two lovers at the wedding altar at the very last moment. The whole thing ends happily for all.

Ratnamala attracts a lot of attention with her charming personality and considering that comparatively, she is a newcomer to the screen, she gives a pretty performance as the Station Master's daughter.

Jagdish as the good-natured kindly Station Master lives his role while Shakir as the devoted Signal-man gives a very sympathetic portrayal. Amir Bai as the signalman's wife is correct and affectionate throughout.

Never did a costume fit so well as did the guard's to Prem Adib. Prem Adib should have really been a guard. He has the physical equipment for the profession. Though he looks the role, his emotional work, however, is far far from satisfactory. His efforts at emotional acting prove abortive. By the way, it would be a mercy if Prem Adib's big close-ups are avoided in future pictures. The reasons are obvious.

With better direction, the picture would have become an outstanding document of human emotions, as the story had plenty of basic material crying to be exploited.

And yet "Station Master" has become popular entertainment for all.

This is a reproduced review from Film India's August 1942 issue.
The images used are from Cinemaazi archive and were not part of the original article.
343 views