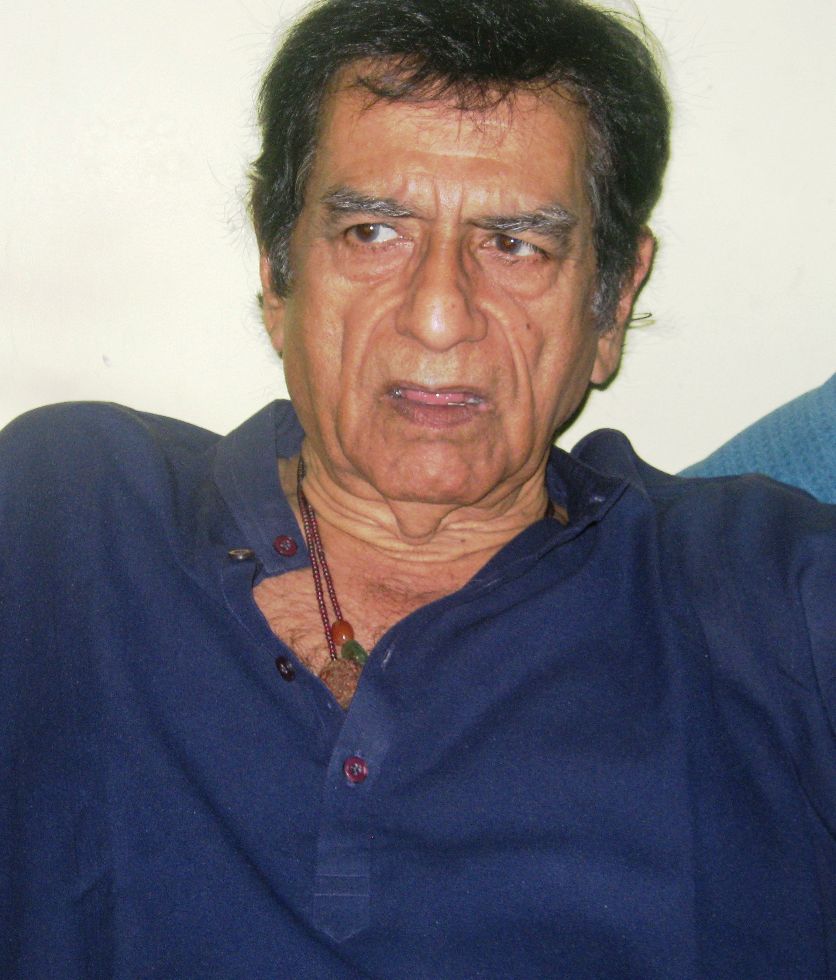 In the 1960’s decade a new composer duo entered with a bang in the world of Hindi cinema. This composer duo was Sonik-Omi and the film was the 1966 release Dil Ne Phir Yaad Kiya which was made under the banner of Rawal Films. This film was directed by C.L.Rawal along with the star like Nutan, Dharmendra and Rehman in the main lead.  Written by G.L.Rawal and composed by Sonik-Omi, all 10 songs of this film are still just as popular even after 48 years from its release. Within a career span of almost 2 ½ decades, Sonik-Omi composed music for almost 100 films. And then after Sonik’s demise in 1993, the duo became a part of Hindi cinema’s history. Omi Ji of this set of two is still very much hale and hearty and resides in Andheri West’s Yari Road with his son and daughter in law. During his interview with Beete Hue Din, Omi Ji was kind enough to speak in detail about his personal and professional life.

Born on 13th January 1939 in Sialkot (Pakistan), Om Prakash Sonik’s father dealt in buying and selling land whereas his mother was a regular housewife. Om Prakash was the third of 8 brothers and sisters. He studied till the 4th grade in Sialkot. And as the partition happened, his family travelled haltingly through Pathankot, Amritsar, Yamuna Nagar and finally to Delhi. Om Prakash’s Chacha (father’s younger brother) Manohar Lal Sonik, used to work as a singer in actor Om Prakash’s elder brother, Bakshi Jang Bahadur’s Musical Dance Party and due to his work schedule, he was in Dehradoon during the partition. Manohar Lal had lost his eye sight when he was merely 2 years old. After passing his Matric in Braille from Lahore’s Blind School he did his Visharad in music. For some time he assisted Pandit Amarnath after which he landed a job in Musical Dance Party. Omi Ji tells us, ‘as soon as we reached Delhi, Chacha Manohar Lal also came from Dehradoon to Delhi where he got a job in the‘Manik Lal Theatre Group. Chacha was approximately 17 years older to me. I was very fond of music as well and so naturally I was quite close to him. Once Chacha decided to go to Mumbai and try his luck in films, my father decided to send me with him as a support since he was visually handicapped. And so in the year 1948 we both came to Mumbai.’

Omi Ji tells us, ‘as soon as we reached Delhi, Chacha Manohar Lal also came from Dehradoon to Delhi where he got a job in the‘Manik Lal Theatre Group. Chacha was approximately 17 years older to me. I was very fond of music as well and so naturally I was quite close to him. Once Chacha decided to go to Mumbai and try his luck in films, my father decided to send me with him as a support since he was visually handicapped."
Manohar Lal Sonik knew only 2 people in Mumbai, one of whom was Pandit Amarnath’s composer son Harbans and the other was singer Shanti Sharma who had learnt music from Manohar Lal Sonik in Lahore. Towards the end of the 1940’s Shanti Sharma had sung for a few films like Raees (1948), Dhoomdhaam (1949), Shaukeen, Veer Ghatotkach and Ahuti and then she left Mumbai for Delhi.

(In case any reader has any kind of information about singer Shanti Sharma, we request you to kindly get in touch with Beete Hue Din. Thank you!)

On reaching Mumbai, Manohar Lal and Omi Ji went to meet Shanti Sharma at her residence in  Khar (East) and fatefully got a chance to go to a recording with her on the same day. Omi Ji tells us, ‘since I was merely 9 years old, I won’t be able to tell you which song it was or for which film it was, but I do remember that it was a duet as the male singer didn’t turn up and hence composer Harbans decided to record the song with Shanti Sharma and Chacha. This was a truly good start as hereafter Manohar Lal sang many songs for composers like Husnlal Bhagatram and Gulshan Sufi under the pseudo name Master Sonik. His solo song Subah ka bhoola sham ko gar laut ke ghar aa jaaye from the 1955 film Ghamand composed by  Gulshan Sufi was rather popular at that time’.

Omi Ji had a maternal uncle Sardar Man Singh Rana in mumbai who due to his alliance with Azad Hind Fauj was called Comrade. After the demise of Netaji Subhash Chandra Bose, he had settled in Mumbai where under the name of Comrade Pratap Rana he produced the film Parwana along with producer Haldia. Released in 1947, film Parwana was K.L.Saigal’s last film. Thereafter Comrade Pratap Rana producer films Vidya (1948) and Jeet (1949) on his own. Jeet was his first wife’s name and after she passed away he married director Mohan Sinha’s daughter Vidya. But unfortunately in 1947 Vidya too passed away during childbirth. Comrade Pratap Rana kept the names of his films after his two deceased wives as homage to them. A grandfather now, Mohan Sinha raised his daughter vidya’s newborn daughter and even named her after his late daughter. Today we know that daughter, Omi Ji’s maternal uncle’s daughter, as Vidya Sinha who would also be his maternal cousin.

On the other hand producer Haldia also produced two films Ishwar Bhakti (1951) and Mamta (1952) after Parwana. He entrusted the music of both the films to Manohar Lal Sonik. During the film Ishwar Bhakti, Manohar Lal joined hands with Haldia’s manager Girdhar and furnished the film's music under the duo of Sonik-Girdhar. While he was credited with composing film Mamta’s music on his own, of the films 8 songs at least 1 had been composed by Hansraj Behl. But neither of the films could leave any impression on the box office. At the same time since Sonik had become a composer, now he started receiving less and less work as a singer and consequentially his struggle to survive started once again. Omi Ji tells us, ‘Chacha utilized that difficult period of his life to learn the nuances of film music from V.Balsara and thus mastered the harmonium and very soon he started getting bookings as a harmonium player. During one such recording, composer Madan Mohan used him as an arranger and Sonik proved himself in this new arena as well. Actually Madan Mohan had to compose songs and music with an Indian feel to it and his arranger ‘Chic Chocolate’ who was an African origin trumpet player was well versed only in western music.’

Omi Ji tells us, ‘we kept working continuously with Roshan Sahib and during that time I learnt all the nuances of music from both my Chacha and Roshan Sahib. For the very first time, in Roshan’s 1963 film Dil Hi To Hai starring Raj Kapoor and Nutan, my name was attached with Chacha as an arranger and we were recognized as the duo arranger Sonik-Omi. On seeing our name the film’s producer G.L. Rawal has spontaneously said that the name sounds like a composer duo and soon he proved his words to be a prophecy when he gave us the musical responsibility for the film Dil Ne Phir Yaad Kiya.

For the very first time, in Roshan’s 1963 film Dil Hi To Hai starring Raj Kapoor and Nutan, my name was attached with Chacha as an arranger and we were recognized as the duo arranger Sonik-Omi
Dil Ne Phir Yaad Kiya proved to be a big musical hit of its time. But after that the duo Sonik-Omi had to stay put at home in wait of a good offer for almost 2 years. During this phase they did receive offers of small budget films but they kept refusing all such offers. And since they had become a composer they stopped receiving work as an assistant and arranger. Omi Ji tells us, “Even after giving such a big hit, our struggling days had started all over again. Till when we could sustain on signing amounts. And hence the day came when we had to accept whatever work that came our way. The music of our 2nd film, 1968’s Aabroo, had become very popular as well. Such precedence of success was set by our 1969 release Mahua and our 1970 release Sawan Bhadon. But the small films we signed during our struggle left a bad impact on our career and we started being known as B-grade film composers. Although whenever we had a chance we did try to maintain our standard despite the grade of the films, be it Dharma (1973) or Raftaar (1975) or Umar Qaid (1975). To the extent that the music of occasional producer-director-actor Joginder’s films like Bindiya aur Bandook (1973), Do Chattanein (1974) and Fauji (1976) also went on to become hits. But freelancing has its own set of problems because of which once our career graph came down it could never climb up again.

Though the 1989 release Desh Ke Dushman was the last film composed by Sonik-Omi but some smaller ongoing projects were completed later, some of these smaller films were released later on as well. Film Hind Ki Beti released in 1998 was officially their last film release.

Rafi’s co-singer S.Balbir from the film Naya Daur’s’ song Ye desh hai veer jawaano ka was Omi ji very close friend. Balbir has sung many hit songs like Aaj kyon humse parda hai (Sadhna), Bhej chhana chhan (Ab Dilli Door Nahin), Chahe ye maano chahe wo maano (Dharamputra), Ye maana meri jaan mohabbat saza hai (Hanste Zakhm), Jee chaahta hai choom loon (Barsaat Ki Raat), Jo mama mera aa jayega (Heer Ranjha). Till the beginning of the 70’s decade one would still hear a couple of songs once in a while sung by Balbir and then suddenly his name vanished from the music scene. While talking with Beete Hue Din, Omi Ji shed light on Balbir’s sudden disappearance and said that Balbir was not married and he was in a live in relationship with a Koli woman and lived with her at the Koli Basti on Yari Road-Versova in Andheri (West). He was murdered during the beginning of the 1970’s decade around his village in Punjab. He was just 40 years old at that time.

Father of a son and a daughter, Omi Ji or Om Prakash Sonik lives with his son Som Sonik, his daughter in law and two grandsons Nikhil and Karan. His daughter is married and lives in Mumbai’s Powai area with her hotelier husband. Omi Ji says that, “This is the glamour industry’s nature that the one who rises has to fall down one day. The one who does understand this law of the film industry doesn’t face problems in compromising with changing times. Luckily I am one of those people.”

Omi ji passed away at the age of 77 in Mumbai in the morning on 7 July 2016 after brief illness.