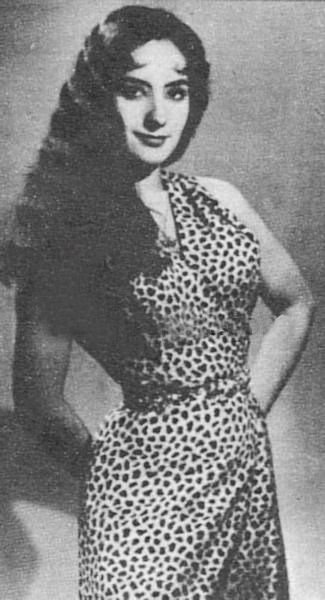 The New Year holds hope of cheer, happiness and prosperity for one and all. To the young dancing starlet Lillian, the New Year will mean much more. It will mark the dawn of a new phase in her career, ushering in an era of success and fame. “I am eagerly waiting looking forward to the new year. I am expecting many big things to happen to me in that year. At any rate, I hope to make big strides in my career in the course of the New Year.”

Who is this promising dancing starlet? If you had seen Bimal Roy’s mystery crime drama Apradhi Kaun?, you wouldn’t have missed the girl who played the vamp. Her role in that film was so vital. That was Lilian and the year was 1957. After two years she staged a real comeback to the screen. What happened to her during the interim period? Thereby hangs a tale but since it is unpleasant one, I would rather refrain from narrating it. Suffice it to say that there was almost a crisis in her domestic life, which prevented her from continuing her career after a spectacular break in Apradhi kaun?.

Tall, slim and lovely, Lillian is a real “oomph” girl with dark pool-like eyes, which attract the attention of those who come in contact with her. She belongs to a respectable Jewish family of Bombay. Her father, Mr. J.S. Ezra, is in the pharmaceutical business while her mother is a great connoisseur of art, particularly talented in the art of painting. Lillian has four younger brothers and one younger sister. She had her education in the Convent of Jesus and Mary, where she studied up to the Senior Cambridge. Although she was a bright student at school, she hated her studies. She was crazy about “English pictures”. The movie-going habit slowly developed in a manner that led her to choose films as a career.

How did it happen? One afternoon when she was idling away at her home, one of her girlfriends, who was working as a film “extra”, took her to Mohan Studios, where Bimal Roy was shooting Yahudi (1958). The latter marked the new arrival on the sets and asked her whether she would care to put on make-up for taking part as one of the “extras”. Promptly she agreed and when Bimal Roy saw the “rushes” of the film, in which she had appeared, the next day, he was so much impressed with her personality that he deleted her bit role in the film and offered her a bigger break in his own production Apradhi Kaun?. Lillian jumped at the offer but when she announced her decision to join the screen to her parents, her father was furious and tried his utmost to dissuade her from joining the movies. But her understanding mother, who knew the aspirations of her daughter, effectively faced her husband’s opposition and helped Lillian accept the offer from Bimal Roy and pursue her career in films.

“My mother”, Lillian said, “has always been extraordinarily kind to me. If she had not been understanding and considerate, I would now be spending one of the most miserable periods of my life. Perhaps, a woman could understand another woman better. That may be the reason why she rallied to my support when I was faced with a problem. My father slowly realized the reasonableness of my mother’s stand and he is now reconciled to my decision to stick to the screen for better or worse. But human as we are, we always hope for better things in life. That’s why  my parents and I look forward to the days when I would be acclaimed as a versatile star.”

Lillian loves dancing. After Apradhi Kaun?, she danced in three pictures – Jailor (1958), Black Cat (1959), and Guest House (1959). She is eager to develop into a good actress. She says she will leave no stone unturned in making producers of Hindi films realize that she is capable of portraying the typical Indian girl. She has now made good progress in learning Hindustani and classical dancing – Kathak. She is particularly fond of doing emotional dramatic roles. This scribe wished her every luck in the New Year.

Cinemaazi thanks Sudarshan Talwar and Cineplot  for contributing this interview which was conducted in 1960 by T.M. Ramachandran
The poster of Jailor is taken from Cinemaazi archive and was not part of the original article.
471 views