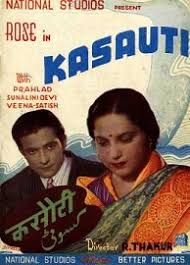 “The Literary Department of the National Studios” has written this story-which, in other words, means that many cooks have been at the soup and no wonder the soup has been spoiled.

Whoever have been responsible for the story, they have shown a peculiar lack of imagination in the development of a theme which could have easily become a powerful screen drama with a little exercise of imagination. Strangely enough, this very “little imagination” makes all the difference between success and failure.

“The Literary Department” of the National Studios inspite of its awe inspiring designation can not compliment itself seeing what it has done to Kasauti (1941). If the national studios are ever to establish themselves as leaders in National entertainment, they simply must pay greater attention to their stories. Right after Woman every story given to the screen by the National Studios has been too poor for film production and one after another pictures have failed to win the appreciation of the public. These are rather bitter remarks, but as true friends of National, we have no other choice.

Kasauti is a beautiful theme of a mother’s sacrifice for the happiness of her only son. Sunalini Devi’s beautifully realistic performance, particularly in the last three reels, saves the picture from being scrapped as useless.

Raju, a well-to-do young man, acted by Prahlad, meets with an adventure on his wedding eve. He saves a prostitute from committing suicide, but she dies, nevertheless, through a fall in her own room in the presence of Raju.

When Raju tries to run away from the scene of death, he falls into the waiting arms of Meena, the younger sister of the dead woman.

Meena is shown as waiting outside all along and one wonders how she knows at all that her sister is dead. Meena suddenly, even before the dead body of her sister is completely cold, starts back-mailing Raju and talks of some irrelevant things like “social status of prostitutes”, “vengeance on all men”, “love for Raju” etc., etc., all too premature and too unnecessary.

Raju is married the next day to Madhuri, acted by Rose, and they go on a honeymoon where Raju forget ful of his love for Madhuri becomes unnecessarily rough to Madhuri .

Meena now becomes Manjula, the society vamp and holding up a murder charge against Raju compels him to introduce her into his society. Raju is also compelled to dance attendance on her. Manjula makes passionate love to Raju but he somehow manages to throw her off every time.

This affair shadows Raju’s and Madhuri’s married life but Raju’s mother, with the vision affection gives to every mother, finds out the secret and takes the matter into her own hands.

The climax is soon reached. Manjula becomes unbearable and demands a marriage with Raju on the eve of the birth of a son in the family. Realizing the impossibility of the situation, Raju’s mother decides to make the supreme sacrifice and going to Manjula's home poisons her and herself to enable her son to live a life of happiness.

Sunalini Devi acts the ideal mother putting rare passion and realism in her work, proving to everyone what great heights of histrionic talent she is capable of attaining if given the right type of role. Rose, as Madhuri, hasn’t much to do beyond looking sweet and changing saris. Both these things she does marvellously well. Prahlad, as Raju the hero, kills the picture at every foot of it. He is wooden. His voice is so gruff. And his movements are too clumsy. The diction of his dialogues is incorrect. He fails to create sympathy in a role where his first purpose should be to win the sympathy of the audience. Even his features are highly unsuitable for a hero. He may make a good gangster but never a hero. His selection as a hero exposes the bankruptcy of imagination in the director.

Veena, as Meena, overdoes everything she does. She gives a few pointers to the professional prostitutes in lusty approaches and rolling of the eyes. What she does is certainly not acting. She, however, puts over a couple of songs well. But that’s all.

The direction of Ramchandra Thakur, M. A. is hardly in keeping with the promise he gave in his first picture, The Civil Marriage (1940). In this picture his imagination and intelligence seem to have been chilled.

Photography comes up to the usual National standard with great difficulty, while the sound is not all that is desired. The music is orthodox and fails to thrill.

If Kasauti is not actually a disgrace, it is hardly a compliment to the studio that produced Woman.

This review was originally published in Film India magazine.