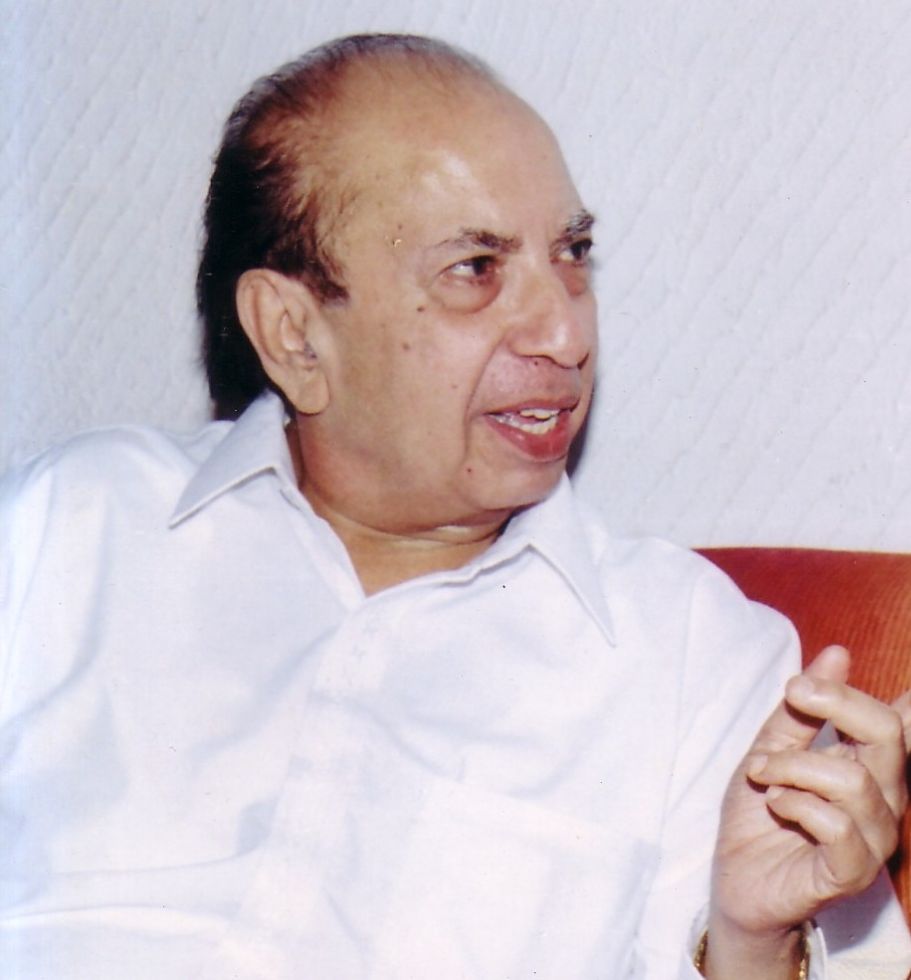 Mahendra Kapoor. Image Courtesy: Beete Hue Din
English  |   हिंदी
The most important part of the golden era of Hindi Cinema i.e. 1950s to 1960s is the melodious film music of that period which has successfully retained its sweetness till date. It was enriched by not only the learned composers but also the great singers of that era. Rafi, Mukesh, Talat, Manna Dey, Kishore Kumar, Lata, Asha, Geeta Dutt, Sudha Malhotra and Suman Kalyanpur were some of such melodious singers who gave innumerable matchless songs to the listeners. One such name among those stalwarts was Mahendra Kapoor.


I met Mahendra Kapoor in the last week of January 2004 in his residence at St. Andrews Road, Bandra (West). During our conversation, he surprised me when he said that neither Adha Hai Chandrama Raat Aadhi nor Chaand Chhupa Aur Taare Doobe was his debut song as the general impression is, but his film career had started long back in the year 1953 itself.

(Penned by Qamar Jalalabadi and sung by Johrabai Ambalewali, the song Thandi Thandi Rait Mein Khajoor Ke Tale, Tere Intezaar Mein Mera Dil Jale was from Filmistan banner’s 1947 release Saajan and it was composed by C.Ramchandra. Shehnai too was a 1947 release. Mahendra Kapoor was 13 years old in the year 1947. Considering his age, he should be in 4th or 5th standard at that time and not in kindergarten)
"...In presence of my father and brother, he asked me to sing for him the song ‘Wo Raatein Kya Bhool Gaye Ho Janam Janam Ke Saathi’ from his private album. I sang and passed the test and Rafi Sahib instantly made me his disciple. He started taking me along to his recordings”.

One day, Shri B.M.Vyas was called at home to teach music to Mahendra Kapoor’s elder brother. B.M.Vyas was lyricist Bharat Vyas's younger brother and he was serving with Prithviraj Kapoor’s Prithvi Theatre as singer, musician & actor. Mahendra Kapoor said, “Instead I started taking music lessons from B.M.Vyas sahib. I was 7 or 8 years old at that time”.

When the gramophone records of the 1947 release Jugnu came into market, Mahendra Kapoor got highly impressed with the male voice in Jugnu’s duet Yahan Badla Wafa Ka Bewafai Ke Siva Kya Hai. As per the trend those days, in place of the actual singer of the song, name of the character of the movie used to be given on the records on which the song had been picturised and the actual singers remained unnamed. Mahendra Kapoor was eager to know the name of the male singer in this duet. After visiting and enquiring at many records selling shops he eventually came to know that the voice was that of a new singer named Mohammed Rafi.

With help from one of his friends, Mahendra Kapoor succeeded in meeting Rafi Sahib at his residence at Bhindi Bazar. Mahendra Kapoor said, “Rafi Sahib and his brother Hamid met me with great affinity and when he came to know that I also sing he invited my father and elder brother to his place. In presence of my father and brother he asked me to sing for him the song Wo Raatein Kya Bhool Gaye Ho Janam Janam Ke Saathi from his private album. I sang and passed the test and Rafi Sahib instantly made me his disciple. He started taking me along to his recordings”.

Mahendra Kapoor said, “Madmast and its music failed to leave an impact on the audience and I remained where I was. Then, V.Balsara married Dhan Indorewala, they both left Mumbai and shifted to Kolkata. I often met renowned pianist Kersi Mistry at Balsara’s home who also worked as an arranger for composer Snehal Bhatkar. One day he made me meet Snehal Bhatkar who was working on the music of the movie Diwali Ki Raat (1956) at that time. Snehal Bhatkar gave me my first solo song Tere Dar Ki Bhikhmangi Hai Data Duniya Saari to sing."

“When composer N.Dutta heard ‘Chaand Chhupa Aur Taare Doobe’, he introduced me to Yash Chopra. At that time N Dutta was busy composing for B.R.Films’s Dhool Ka Phool (1959). He made me sing 'Tere Pyar Ka Aasra Chahta Hoon' for Dhool Ka Phool (1959)  and I became a permanent singer for B.R. camp. This helped my career gain momentum”.

Mahendra Kapoor had already sung few lines in the 1955 released movie Madhur Milan for the song Ek Taraf Joru Ne Nikala Hai Diwala under the baton of composer Bulo C.Rani. Besides this he had also sung a duet O Bedardi Jaane Ke Na Kar Bahaane with Sabita Chatterji for composer Sanmukh Babu in 1956 movie Lalkaar. But none of these songs could give any recognition to Mahendra Kapoor. Meanwhile under Mohammad Rafi’s supervision he started taking lessons in Indian Classical Singing from Pandit Manahar Poddar.

According to Mahendra Kapoor, “Khayyam sahib was well known to me. One day in 1956 he took me to Filmistan Studio to sing a Heer in its movie Heer (1956) which had music by Anil Biswas. I had acute fever that day. I waited the whole night and then only the Heer was recorded in the morning. But I did not get my remuneration even after two months had passed, then only I came to know that Anil Biswas had forgotten to write my name in the list prepared for the accountant. I met Filmistan’s manager to ask for my paycheque but after witnessing his rude behavior I felt so dejected that I swore not to look back to the film world again”. (The male voice in Heer songs, including the said Heer, is Mohammad Rafi’s. It seems that Mahendra Kapoor sung Heer wasn’t used in the movie.)

Mahendra Kapoor said, “I started winning every round. The group of judges for the competition comprised of Naushad, C.Ramchandra, Madanmohan, Vasant Desai and Anil Biswas.  Suddenly one of the participants raised objection that being a professional singer I was not eligible to participate in the competition as it was only meant for the amateur singers. Here the ‘no pay’ for the Heer came to my rescue. Anil Biswas stood in my favor and said that I indeed sang the Heer but just as an amateur singer as I was not paid for that. But that participant filed a suit against me in the court”.

Under compulsion, the organizers had to take in writing from Mahendra Kapoor’s father that in case it is proved that his son is a professional singer, competition’s total expenditure Rs. 2 lakh 50 thousands would be borne by him only. Apart from this, Mahendra Kapoor could also face six months imprisonment on charges of fraud. This whole controversy had prominently come into newspaper headlines. Suddenly a producer started blackmailing Kapoor family.

Mahendra Kapoor said, “Unfortunately I didn’t remember that I had been paid for a song by that producer. He had a receipt with my signature with him. Otherwise I never received any money for the songs which I had recorded till that time. Now the producer was trying to extort money from me. He threatened us if we do not meet to his demand he would make the receipt public. Here once again Kersi Mistry helped me. He worked as arranger with producer’s company too. He took out the receipt from producer’s cupboard and burnt that in my presence”.

(Mahendra Kapoor refused to divulge the name of that producer saying the person is no more and it would not be ethically correct to say anything negative against a deceased person who is not there to defend himself.)

As per the competition rules the winners were to be given chance in playback singing by each of the five judges. Mahendra Kapoor said, “C.Ramchandra ji was the first judge who made me sing Adha Hai Chandrama Raat Aadhi for his film Navrang (1959), which was being produced and directed by the same V.Shantaram who had rejected me for his 1957 released film Do Ankhein Barah Haath song Aye Maalik Tere Bande Hum. My Next song was Naushad sahib’s Chaand Chhupa Aur Taare Doobe for the film Sohni Mahiwal (1958)."

(Film Sohni Mahiwal  released a year earlier than Navrang (1959) in 1958 so chaand chhupa aur taare doobe is supposed to be Mahendra Kapoor’s debut song. But the truth is that neither Adha Hai Chandrama Raat Aadhi nor Chaand Chhupa Aur Taare Doobe was his debut song but it was Kisi Ke Zulm Ki Tasweer Hai Mazdoor Ki Basti from the 1953 release movie Madmast.)

Mahendra Kapoor passed away on 27 September 2008 at the age of 74 in Mumbai. He is survived by his wife, one son, daughter in law, one grandson, one granddaughter and three married daughters.

(We tried to contact Shri Mahendra Kapoor’s son Shri Ruhan Kapoor through E-mails and phone and requested him to provide information on some particular points and verify the facts which were must for updating the write-up but we failed to get the necessary information. Therefore, we are compelled to update the write up with some unverified information from the internet which is against the basic principles of this blog.)