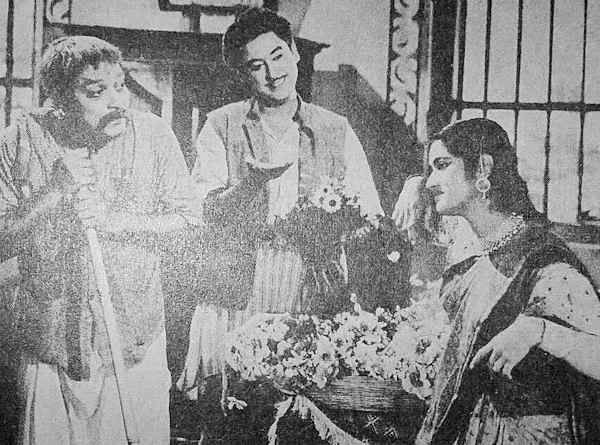 This image is taken from the original article

His voice has been his main asset through the years – a deep voice of rich timbre and great dramatic potential, a voice that attracts attention and impresses people. Invariably, during his varied career, no matter what the vocation he has preferred, his voice has had a great part to play in his success. His other attributes and talents have helped, no doubt, but mainly it has been his voice.

Today Raj Mehra is not only one of the most dependable and talented artistes in the film industry, he is also one of the best commentators in the field. Raj Mehra belongs to that brigade of veteran character actors who are the mainstay of the industry. He has had quite a steady career in films. He never sought to get into films, but since he joined it, he has vindicated himself. To start with, he worked simultaneously in three films – almost an unheard-of thing for beginners – and has worked in about half a dozen films together at any given time.

Born on May 20th, 1913, at Banaras and educated in Banaras and Delhi, Raj Mehra started life quite early as a salesman. He had a good voice, an impressive delivery, the proverbial gift of the gab. And he plunged into the field of salesmanship.

His voice and his delivery, again, played their part in his being taken into the field of broadcasting. He started at All-India Radio, New Delhi as a Drama artiste, went on to become News Commentator and Translator and then graduated to Assistant Program Director. For a while, he was transferred to Bombay and then went back to New Delhi again.

A commentator of proven caliber, Raj Mehra was summoned for a spot in B.B.C, London in 1941. The offer wasn’t very attractive and was declined. A counter-offer, very lucrative indeed was made and accepted. Raj Mehra made ready to go but Providence, in the person of his father-in-law, intervened. The old gentleman, concerned about his daughter, arrived unannounced in Bombay, went and pleaded with the A.I.R. Station Director. The latter persuaded Mehra to stay on in Bombay, away from the bomb ridden city of London. After this, even Mr. Z.A. Bukhari (one of the pillars of Broadcasting in India) who later came down from London for a short visit, could not coax him into accepting the B.B.C. offer.

Back to New Delhi after that, and then Raj Mehra – standing first in a competitive examination – switched over to the Information Films of India as commentator a Bombay. He made his mark there, too, and remained there until the department closed down.

Just then, one day three producers came to him and offered him a role in their respective films. They were Krishan Chander, who was then making Sarai Ke Bahar (1947), Shahid Lateef and another. Mehra accepted the offers and stayed on in Bombay.

Over a decade has passed since then. Raj Mehra has appeared in scores of films and has made quite a mark as a character artiste. Versatile and conscientiously hard-working, he fully deserves the position he has achieved.

Cinemaazi thanks Sudarshan Talwar and Cineplot for contributing this article. It was originally written by Daulatram in 1957.