The Hearththrob from 1930's: Jal Merchant 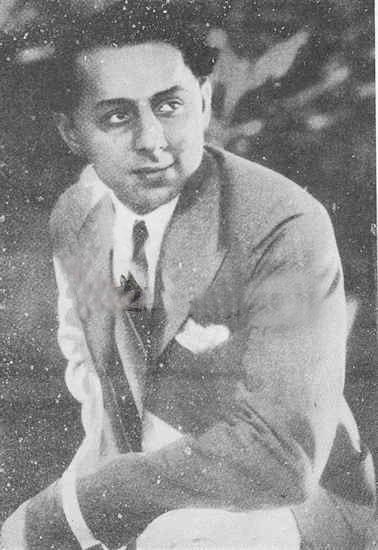 Image from the original article

It was a colourful stellar team that Jal Merchant formed with Zubeida in the early talkies. But it was in mythological roles, and not romantic parts, that they first won the hearts of cinegoers. The first picture that made them a rage everywhere was Sagar’s Veer Abhimanyu (1931), in which Jal played Abhimanyu to Zubeida’s Uttara. In the next one, Jal was Arjun, Abhimanyu’s father, while Zubeida played Subhadra.

Like Zubeida, Jal Merchant joined films in the “silent days”. It was a change of medium for him, for he had been playing female roles on the Gujarati stage! His performance as the heroine of “Shankit Hriday,” a Gujarati play, proved a hit, and Nagendra Majumdar, who directed the play, induced him to switch over to screen acting. Jal joined the Imperial Film Company, and among his early films, the most notable was Vasant Bengali (1930), a social picture directed by R.S. Chowdhury. In those days, the screen hero generally had more brawn than brains, but the lead player of Vasant Bengali was called upon to show more intelligence than physical prowess. Jal did just that – and won instant fame.

After the advent of sound, Jal’s first four films for Sagar were mythologicals – Veer Abhimanyu, Subhadra Haran (1932), Pandav Kaurav (1933) and Mahabharat (1933). For close-ups of these pictures, Jal used to wear trousers and only the upper part of his body was made up for his role. But in one close-up his pants were also visible! The shot was cut on the first day of screening in Bombay.

Gifted with a fine voice, he also delighted cinegoers with his singing.

In Zarina (1932), written and directed by Ezra Mir, he was the tongawalla who falls in love with a dancing girl at a carnival. This poignant romantic tragedy won plaudits for both Jal and Zubeida. It was their last picture together for Sagar. Zubaida left Sagar and Sabita Devi took her place. Sabita and Kumar were the first stars imported from Calcutta. Sabita co-starred with Jal in Phantom of the Hills (1934), directed by Ezra Mir, in which he played a dashing Pathan riding a white charger. In Educated Wife/Grihalaxmi (1934), directed by Sarvottam Badami, he played a modern educated youth. In this role, the versatile Jal revealed a genial personality. Sabita was again his co-star.

Jal and Zubaida played stellar roles together once again in Aaj Kal (1934), directed by R.S. Chowdhury. This was the last important picture for both stars. Jal Merchant, who already had a flourishing business, retired from the screen. Later, he started to live a quiet life in Bandra. Jal was an excellent shikari in his younger days. His screen associated also remember his soft voice, gentle manners and sensitive, handsome face.

Cinemaazi thanks Sudarshan Talwar and Cineplot for contributing this article written by V P Sathe.