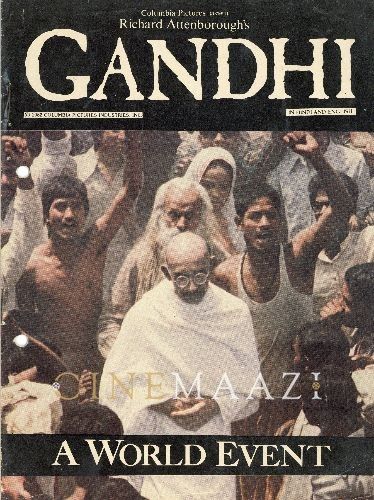 The light that had gone out of our lives shone brightly again when Sir Richard Attenborough's epic film Gandhi (1982) had its premiere recently in Delhi, followed by screenings in London and then the U.S., where it has been acclaimed as a masterpiece and 'The Movie of the Year'. The vitality of Gandhi's ideas on non-violence in a violent age and the power of the human spirit to resist injustice are central and still absolutely relevant. The reactions of the Press underline this. Any doubts about the NFDC's investment of around six crores in the film have been dispelled, as the NFDC will get back one-third of the film's world-wide profits, which are likely to be considerable.

Press response in the world's capitals was glowing. "Simply the movie of the year" said Mr. Rex Reed in The New York Post, adding that Mr. Attenborough's biography of Gandhi combined "... eye-popping spectacle with a deeply felt and sincerely communicated inner truth and idealism to distil the essence of a complex figure from a less chaotic and more sober era ..."

Kathleen Carroll in The New York Daily News gave the film the highest rating four stars, calling it "An amazing achievement" which re-emphasized "the importance of nonviolent demonstrations as a political weapon at a time when too many people are resorting to acts of terrorism in order to express the need for change."

Vincent Canby, in The New York Times, described the film as a "Big, amazingly authentic movie, very sincere and aware of its responsibilities", stressing that its most important aspect was that it would "bring Gandhi to the attention of a lot of people around the world for the first time, not as a saint, but as a self-searching, sometimes fallible human being with a sense of humour as well as history.

The unique social message, combined with excellent promotion should prove Gandhi a winner. James R. Spitz of Columbia Pictures predicts that Gandhi will receive Academy Award nominations in every important slot, and will sweep the Oscars for every top award.

In Britain, the film has made a tremendous impact, extensively reviewed and discussed over Radio and TV, and hailed as an outstanding movie. "After three decades in the shadows of history, Mahatma Gandhi returns again" wrote a British journalist. There was some sharp reaction too. Nigel Andrews, writing in The Financial Times called it "an eccentric wraparound yarn, but far from skimpy and made from purest pietistic polyester ... John Briley's script is tinpot, tokenist and spectacularly unimaginative ... (The film) is a turgid series of lantern slides on the virtues of non-violent resistance."


Indian press reaction has been varied, and not always favourable.

Vijay Tendulkar, playwright, admits that the film made no major impact on him, as it carried "no mention of Subhash Chandra Bose" and was "somewhat sketchy". He felt that "the references used are mostly still pictures of that time. At times the film becomes a moving collage of still photographs" by which "the film loses its essential live quality and becomes an album, though interesting especially for one who's lived through this period."

Share of profits from national and international showings according to ratio of investment.

Investment will be recouped in ratio of 40%/60% (roughly), and out of the nett profit, after recoupment of investment, NFDC will get 16.25% of profits.

Nissim Ezekiel, poet, points out "the very fine control which I have always admired in a work of art. But it is not necessarily a film for art buffs or to be seen as art cinema."

Minoo Masani, politician: "I liked the film for its extreme fairness historically to the Indian and British points of view."

Amita Malik, writing in The Statesman, suggests that Attenborough's Gandhi is essentially an export film. Critical, as indeed we should be, of certain aspects of the film, she praises Ben Kingsley's portrayal of Gandhi: "The basic Gandhi certainly emerges with honour as well as credibility." She speaks for all of us in saying, "As far as India is concerned, our judgement of the film must naturally be our own, keeping our memories, our history and our values in mind."

For once, instead of the glamourisation of the violent and crass and physically strong, we have a spiritually powerful, yet nonviolent hero, a frail man in a loin cloth, who believed that "An eye for an eye only makes the whole world blind."

This article was originally written by Anna Sujatha Mathai and was published in Indian cinema 1982-83 issue. The images used were taken from Cinemaazi archive and the internet.
271 views