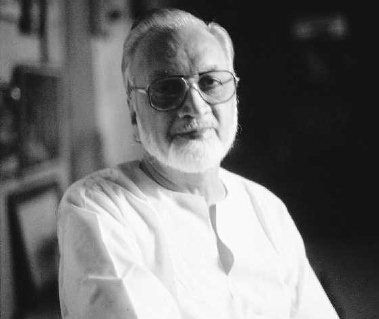 A colossus of contemporary theatre, a prominent playwright and Padma Bhushan awardee Vijay Tendulkar was also a film and television writer, literary essayist, political journalist, and social commentator primarily in Marathi. Best known for his plays, Shantata! Court Chalu Aahe (1967), Ghashiram Kotwal (1972), and Sakharam Binder (1972), his work was largely inspired by real-life incidents or social upheavals. They examined unpalatable realities in a stark light. Many of his plays are regarded as Marathi theatre classics, and have gone on to be translated and performed in several Indian languages. A highly influential figure over five decades, he also penned 11 Hindi and 8 Marathi films of the art cinema genre. Among these are Nishant (1974), Akrosh (1980), and Ardh Satya (1984), which chronicled violence on the marginalised to stunning effect, as well as Samna (1975), Sinhaasan (1979), and Umbartha (1981) which dealt with women’s activism in India. Winner of the Padma Shree, and the Sangeet Natak Akademi Award followed by the Sangeet Akademi Award Fellowship, among other awards, he also won the National Film Award for Best Screenplay: Manthan (1976), and the Filmfare Best Screenplay Award for Aakrosh, and Ardh Satya.

Born Vijay Dhondopant Tendulkar on 6 January, 1928 in Girgaon, Mumbai, his father held a clerical job and ran a small publishing business. Taking to writing at an early age owing to the literary environment at home, he was just 6 when he penned his first story. At age 11 he wrote, directed, and acted in his first play. He was 14 when he quit his studies to participate in the 1942 Indian Freedom movement, as well as the communist group Nabajiban Sanghatana, whose sense of sacrifice and discipline he found inspiring. Writing for newspapers, he also penned early plays while in his 20s. He made his mark with Srimant in 1956, which created a stir with its storyline which revolved around an unmarried young woman deciding to keep her unborn child even as her wealthy father tries to ‘purchase’ a husband for her to preserve his social prestige.

Gritty, authentic, and powerful, his writings introduced new sensibilities to modern Marathi theatre and changed its storyline in the 1950s and the 60s. His play Gidhade penned in 1961, set in a morally collapsed family structure, explored the theme of violence. He went on to delve into violence in its different avatars, from domestic, and sexual, to communal, and political, in his later plays. Gidhade thus helped establish Tendulkar’s unique writing style. His Shantata! Court Chalu Aahe, which is considered among his finest works, revolved around a group of teachers who plan to stage a play in a village and depicts a mock trial which turns into an actual accusation regarding an out-of-wedlock child. Sakharam Binder (1972), explored the domination of the male gender through the character of Sakharam who exploits women to his advantage under the guise of not believing in so-called outdated social mores like marriage. Tendulkar’s Ghashiram Kotwal (1972) was even more acclaimed. A political satire set in 18th century Pune, it blended traditional Marathi folk music and drama with contemporary theatre techniques, to set a new standard for Marathi theatre. One of the longest running plays in Indian theatre, it won Tendulkar a Jawaharlal Nehru Fellowship for a project titled, ‘An Enquiry into the Pattern of Growing Violence in Society and Its Relevance to Contemporary Theatre’. Other plays he penned include the metaphorical Safar (1991), The Masseur (2001), and His Fifth Woman (2004) which was his first play in the English language. He wrote 27 full-length plays and 25 one-act plays over the course of his career.

In cinema, Tendulkar penned the screenplays of several films. While Shantata! Court Chalu Aahe (1972) was based on his play, the Shyam Benegal-directed Nishant (1975) focused on the power of the rural elite and the sexual exploitation of women during the time of feudalism in India. Samna (1975), a crime drama directed by Jabbar Patel, entered the 25th Berlin International Film Festival. Manthan (1976) directed by Shyam Benegal was inspired by the pioneering milk cooperative movement of Verghese Kurien. The Jabbar Patel directorial Sinhasan (1979) drew from the political turmoil of India, while Gehrayee (1980) directed by Vikas Desai and Aruna Raje belonged to the horror-thriller genre. The Govind Nihalani-directed angst-ridden Aakrosh (1980) was a scathing satire on the corruption in the judicial system and the victimization of the underprivileged by the able and the powerful. Akriet (1981), directed by Amol Palekar, was a thriller that centred around superstition and corruption in a village in India. Umbartha (1981), directed by Jabbar Patel, depicted the story of a woman's dream to step outside her four walled home and bring change in society. The gritty Nihalani-directed Ardh Satya (1983) is widely considered one of the best cop films of Indian cinema. Jagmohan Mundra’s Kamala (1984) told the story of an ambitious journalist who buys a girl from a village in rural India to expose the existence of flesh trade and embarrass the political elite, but ends up exposing his own moral hypocrisies. Sardar (1993), directed by Ketan Mehta, was a biographical on one of India’s strongest leaders. Yeh Hai Chakkad Bakkad Bumbe Bo (2003), directed by Sridhar Rangayan, was a children’s film involving fun, adventure and learnings. Eashwar Mime Co. (2005) was screened at Durban International Film Festival, the 3 Continents Festival and the Kolkata Film Festival. It was Tendulkar’s last screenplay.

Tendulkar’s oeuvre includes the novels Kadambari: Ek (1996), and Kadambari: Don (2005), as well as the short story anthologies Dwandwa (1961), and Phulapakhare (1970). He also translated nine novels, two biographies, and five plays by other authors into Marathi.

On the personal front, he was the brother of well-known cartoonist and humourist Mangesh Tendulkar. Married to Nirmala, the couple had a song Raja and daughter Priya.

Vijay Tendulkar passed away on 19 May, 2008, in Pune. He had lost the immediate members of his family before his demise—while son Raja and wife Nirmala died in 2001, daughter Priya passed away the following year in 2002 of a heart attack following a protracted battle with cancer.

Tendulkar’s work powerfully highlights society and politics. Holding Leftist views, he did not shy away from exposing political dominance and the hypocrisies of the Indian social mindset. His strong beliefs won him enormous acclaim as well as censure.