"Is Money the only power in the World?" Ajit was faced with this question.

Young and energetic, Ajit was gifted with a sense of fairness and Justice. The son of an oridnary farmer, Ajit did not believe in bowing down before others.

And one day he met Kumar, the son of the Zamindar. Kumar represented the haughty and greedy Nobility, and had certain plans to enrich himself to the utmost. He saw Ajit and asked for his help in carrying out his programme. He promised Ajit a high price for his help. Ajit wavered - When Radha came to his rescue! "Do not prosper at the cost of others!" said Radha - for help in Kumar's programme would have meant utter poverty and starvation to a number of peasants!

Ajit refused to be sold to Kumar. Kumar got furious over being insulted by Ajit. Ajit had to leave the village.

Ajit went over to the city and stopped at Murli's place. An old man of fifty, Murli was living with Chunia a young widow of about twenty two. They loved each other - they had Human tie of sympathy and love in common. Murli warned Ajit that the city is a living hell for the demon of greed was the lord of the city. Ajit did not believe. In the city Ajit became a labour-leader and a popular man.

One day he met Lata. The daughter of Millowner and Multimillionaire, Lata was out to enjoy life. Ajit came in her hands as a toy. When Murli heard of Ajit's downfall he was pained. He tried to warn Ajit - because he loved Ajit just like his own child. But Ajit was absolutely lost. Instead of hearing Murli's advice, Ajit quarelled with Murli.

Once again Ajit was faced with the question, "Is money the only power in the world?"

An unrest in the Mill-area broke out as Mill-hands were retrenched. Ajit, the labour leader, was silent and unmindful. Murli saw the downfall of Ajit, and he was shocked. Ultimately Murli decided to die in order to save Ajit from his colossal downfall.

He returned home - a broken man and after meeting Radha he realised that these big problems cannot be solved single handed - But above these class, struggles are Love; sympathy and Human Elements.

The solitary lamp, high above was shedding its light in the Darkness of Night. 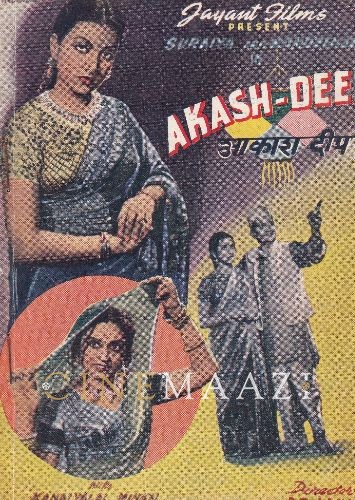