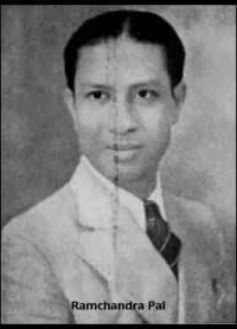 Early music composer, singer and actor, Ramchandra Pal is known for films such as Punarmilan (1940), Kangan (1939) and Naya Sansar (1941). Largely a product of Bombay Talkies, to him goes credit for introducing Western orchestration in the music of films produced by the studio. He was also able to blend elements of folk, classical and light music in his compositions. Composing music for approximately 20 films, he also appeared onscreen in Azad (1940).

Born in Calcutta in 1909, he acquired musical training under Badal Khan. Beginning his career in films in 1930-1931, he composed music for Tamil films Bilwamangal (1932), and the musical score for Sarangdhara (1935), followed by the Bengali features Rajani (1936), and Indira (1936). When the first Hindi film was made in South India in 1939—namely, Prem Sagar—he scored the music for the feature. He had been contracted for the same by the husband of famous singer Subbulakshmi. The director of Prem Sagar, Narottam Vyas had praised Pal’s talent to Himanshu Rai, owner of Bombay Talkies, who was at the time in search of a music director who could bring modernity and scope to the orchestration of the studio’s films. In this way, Pal was inducted into Bombay Talkies.

He went on to achieve fame for the studio’s films that he scored music for along with Saraswati Devi. He composed the music for five songs of the Leela Chitnis-Ashok Kumar starrer Kangan (1939). Duets Radha Radha pyari Radha, and Kyun baje hriday veena ke taar, with Leela Chitnis and Ashok Kumar, became very popular. He also composed songs such as More Ram jilawe Ram which was the first film song penned by Pradeep, and the Rabindra Sangeet based Maran re tu hi mera Shyam, as well as the Leela Chitnis number Jal bharne chali ri guiya. He was the first to bring Bengal’s Bhatiyali folk music into film music in Kangan with Bande naav ka langar chhod. He had a hand in the well-loved song from Bandhan (1940) – Chal chal re naujawan even if the tune had been basically suggested by Ashok Kumar’s sister, Sati Devi. This song, penned by Pradeep, was taken as an inspirational command by members of the national freedom movement, while the song was given the status of virtually a national song by the Punjab and Sindh assembly. Such was its popularity that in cinema halls, the screening of the film would be disrupted with requests to repeatedly play this song.

In the film Bandhan (1940), he made use of Western orchestration in the musical score. His composition skills were also seen in the song Haariye na himmat visaariye na Ram in the film Azad (1940). Songs such as Aao banaye gharwa pyara from Punarmilan (1940) rendered by Snehaprabha and Ashok Kumar, Kar le kaam bhar le Ram which he himself rendered, Aaya re pardesi sajanwa rendered by him along with Rajkumari, Hans le jee bharkar hans by Snehaprabha, O jeenewale hanste hanste jeena by Arun Kumar, the super hit Nacho nacho pyare mann ke mor by Arun Kumar and Snehaprabha, Sooni sejariya by Rajkumari, and Deep jala le by Snehaprabha all made their mark in Bombay Talkies films thanks to the simple yet heart-warming tunes scored by Pal. His orchestration skill was more comprehensive than that of Saraswati Devi, and credit goes to Pal alone for bringing Western orchestration into Bombay Talkies films.

Atre Pictures’ Tasveer (1943), Janak Pictures’ Shobhana Samarth and Prithviraj-starrer Nala Damyanti (1945), and Ramnik Productions’ Taramati (1945) were some of the films he went on to score music for. He moved away from his usual style to compose a different sound for Ayaz Productions’ Laaj (1946), as seen in the Radharani-rendered songs Nayi duniya basa le sajani, Chhayi hui duniya mein abhi raat hai, and Kya saath hamara aur inka. The songs of Phir Bhi Apna Hai (1946) penned by Mukhram Sharma, Janak Pictures’ Santaan (1946) by Anjum Pilibhiti, and Urvashi (1946) with Shyam Sunder and Paigankar with lyrics penned by Pandit Raghuvir, saw Pal back in his familiar style.

Pal was unable to further grow the reputation he had built up at Bombay Talkies. The changing trends in the music industry of the 1950s proved challenging. He went on to write and direct the film Rajnandini, also scoring its music; however, the film failed to release. He thereafter led a quiet life at his home at Shivaji Park’s Keluskar Road.