Steely-framed, strong and brawny Budhwa, the blacksmith, lead an exclusive life. Excepting a little mischievous lad, Kalva, who worked his bellows, he had no interest outside his work.

Iron was his work—his worship. His little smithy, the temple, he held sacred. And seeing his mighty arms bend and beat out hard steel into desired shapes, the villagers thought iron had entered his soul.

But nay, the soul underneath a silent and steely exterior bubbled over with human love and kindness.

And Kalva, the cheery youngster, whom Budhwa had picked up as an orphan and heaved to his warm heart was the sole recipient of it. His songs were like the single and solitary ray of sunshine entering a somber cottage. Beyond this love, Budhwa knew none other—never dreamed of a different one.

So, when the roving bird-seller and match-maker Chhelkaka suggested to him to take a Maina for companionship, he only considered it a jest.

But when the fellow actually returned with the offer of the hand of the beautiful Maina, the niece of Gangasingh, Budhwa opened his mouth in wonder and disbelief.

Maina the beautiful was aspired to by the dashing and handsome son of the Thakur—Vasant loved her. But Maina's aunt wanted the prize groom for her own daughter, Seeta. So she hastened to dispose of Maina off to the first available bidder.

Happy in his heart and thankful to God for this too gracious and unhoped-for reward, Budhwa came with pomp and show to marry his bride away, but Ah! Destiny

Destiny played a queer trick upon the unsuspecting Budhwa. Fate, cruel and malicious, hurled a thunderbolt on his head—the bride, the promised Maina, was nowhere to be found. She had fled.

Maina and Vasant loved one another with undying affection. In the face of the impending calamity, they had arranged a rendezvous and planned to elope away. But they had been forestalled and tricked out by a cleverer adversary, Seeta, who loved Vasant with a mad passion and had contrived a way to checkmate the fruition of their plans. She had, a few weeks earlier, begged Vasant of his love and been refused in a letter. That letter she produced before the guileless Maina as addressed to her. Her heart sank within her—yet she kept the tryst, only to be more painfully shocked at the faithlessness of Vasant. She was at a loss to know what to do except to end her wrecked and wronged life.

Budhwa, already oppressed with his loveless and lonely life, found this last stroke of ill-luck as too terrible to bear. He sat listlessly and moody all day, cursing himself for having foolishly believed that Fortune would ever smile on him.

The day of the cart-race in the village arrived and Kalva thought it to be a fit occasion to rouse up the long inert Budhwa to action.

He urged him to join the Race. Once in the race, the strong-armed Budhwa caught its wild spirit and drove his cart at a terrific speed. And before the winning post was reached a hapless woman erred into its sweep and was overrun.

Budhwa pulled his cart still and carried the bleeding and senseless victim to his house and tended her to consciousness. The poor thing was no other than his match, Maina, come to atone for her sins by sacrificing her life in the service of the man she had wronged and injured by her attempt at elopement.

But before she had thrown herself at Budhwa's feet and confessed who she was and what penitence she meant to practice, she overheard Budhwa tell Chhelkaka that he had taken an oath to consider all women born as his sisters and would never again entertain a thought of marriage never in this life. This vehement and final declaration by Budhwa once again - threw Maina into a dilemma and she dared not broach the subject.

However, by telling that she had no place to go to, Maina was permitted to stay on in the house as Budhwa's sister.

Vasant had been prevented from keeping the tryst by the sudden and severe illness of his mother. Later he was told that Maina had disappeared somewhere.

Pressure had worked and through the persuasive efforts of Chhelkaka, he had agreed to marry Seeta.

Gossip ran rife around the village that a woman was come to stay at Budhwa's. And the universal interest in the matter was still further heightened by the later knowledge that she was no other than the 'eloped bride', who had made Budhwa the laughing stock of the people at large. Budhwa, when he learned this, was very furious upon Maina for having tried to deceive him.

Maina pleaded her innocence and told her tale truthfully, movingly. Convinced of Maina's innocence, Budhwa's wrath turned upon the betrayer of his sister's trust. Taking up a gun, he hastened to the Thakur's house to take to task the faithless Vasant.

The marriage-mandap was ready. The bride and the bridegroom rose up to go the seven rounds around the sacred fire, when Budhwa furiously entered with a gun in hand and in a thundering voice bade Vasant stop and get ready to suffer the punishment every betrayer of womankind deserved.

Did the fanatic brother Budhwa kill Vasant, in vengeance of his adopted sister's betrayal or did he not? Were Vasant and Seeta married or was Seeta's guilt exposed and this marriage prevented? Did the hapless Maina regain her lost love, retrieve her lost paradise of conjugal felicity? What happened? And How?

Behold the answer to these quizzing questions on the silver screen in the most breath-taking climax of "AKELA", Great India's incomparable drama, shortly coming to your favourite theatre. 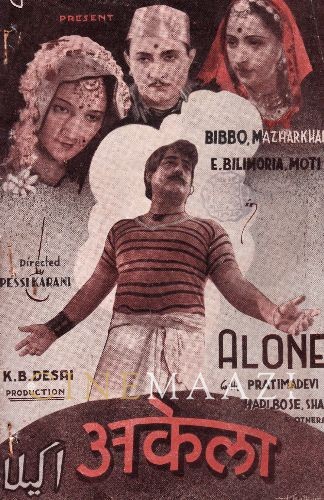