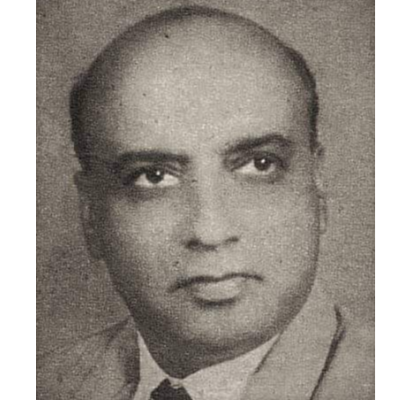 Born on 7th August 1916 in Jabalpur, Madhya Pradesh as Pyarelal Shrivastav, P L Santoshi came into the film industry through a chance occurrence.  A shooting was taking place in his hometown and the unit was in need of a dialogue assistant. Being a skilled writer, he joined the shoot. After completing his matriculation exams, he received some encouragement for his good work, and shifted to Bombay in the mid-’30s to become a writer and a lyricist. A man of many talents, he received acclaim in the Hindi film industry as a producer, director, lyricist and writer.

In 1937, he got the opportunity to pen a couple of songs in Jaddanbai’s Moti Ka Haar as his proper entry into the film world. He also appeared in a minor role in this film. During that time, he was also employed as her personal secretary too. In the same year, he also wrote four songs for her another film called Jeevan Swapna. He jumped several studios in his career, from Ranjit to Bombay Talkies and then Prabhat Films. While he was associated with Prabhat Studios, he put on the director’s hat with the film Hum Ek Hain (1946), still remembered for making two young actors – Dev Anand and Rehman very popular. The film marked their debuts, along with the debuting heroine Rehana. Rehana will go on to become a favourite of P L Santoshi’s. Guru Dutt was his assistant in this film. Unfortunately, the film didn’t do very well at the box office. His second film Shehnai proved to be a major success was released the following year.

In 1950, Santoshi collaborated with Raj Kapoor in the film Sargam which was also well received by the audience. However, following Sargam, a series of his films to make a mark in the box office like Apni Chhaya (1950), Shin Shinaki Boobla Boo (1952), Chham Chhama Chham (1952), Chalis Baba Ek Chor (1953), Sabse Bada Rupaiya (1955), Hum Panchhi Ek Dal Ke (1957), Garma Garam (1957), and Pehli Raat (1959). This robbed him of his hold in the industry for a while. Shin Shinaki Boobla Boo was made under the Santoshi Production.

Bharat Bhooshan and Madhubala starred in Santoshi’s 1960 venture called Barsaat Ki Raat which made its strike at the box office. It was a breather for Santoshi after the trying times.  This was a short-lived moment as it followed another series of unsuccessful films in the box office such as Pyaar Ki Dastan (1961), Opera House (1961), and Holiday In Bombay (1963). The 1963 Raj Kapoor and Nutan film Dil Hi Toh Hai couldn’t alter his luck at the box office, despite its cast and entertaining factor. He made one last film in 1968 called Roop Rupaiya starring Jagdeep and Jayamala Kale.

He penned several song lyrics for films over the years.  Starting with the songs Aise bag lagaya, Man ke waasi maan mei aao in Moti Ke Haar which was his entry into films, he continued to write lyrics over the years. In 1936, when he joined Ranjit Studios, he wrote the lyrics for six songs in Toofani Toli which was composed by Gyan Dutt. In his time in Ranjit studios, he wrote songs for films namely, Baazigar, Ban Ki Chidiya, Billi, Gorakh Aya, Prithvi Putra, Rikshawala, Secretary (all 1938), Aap ki Marzi, Meri Ankhen, Nadi Kinare, Pati Patni, Sant Tulsidas, Thokar (all released in 1939), Achhut, Deewali, Pagal, (all released in 1940), Pardesi (1941). Majority of these songs written by him in these films were composed by Gyan Dutt with the exception of Deewali, Pagal, and Pardesi, which were composed by Khemchand Prakash.

In 1941, Santoshi moved to Bombay talkies where he was credited as a lyricist in Anjan and Basant, songs of which were composed by Pannalal Ghosh. The songs of Basant were widely appreciated. Tummko Mubarak ho unche mahal yeh, Ek duniya basa le mere maan, and more such songs from Basant were voiced by Parul Ghosh and are still in people’s memory. He also penned the popular song Nazar se nazar jo milai gayi hai in Sangram.

His film Shehnai’s songs had made a mark in audience’s heart with numbers such as Anna meri jaan Sunday ke Sunday. The wording in these songs was set apart from the formal trope that cinema songs had earlier, which resonated with the audience personally. Songs like Kismat humare saath hai, or Ae ho sawariya... jai bolo mahatma gandhi ki were played everywhere at the time.

The Santoshi- Ramchandra duo made songs that were way ahead of its time and created a benchmark for film songs to follow. He was given the stature of an idol in the 50s who provided a fresh take to film songs by focusing not just in the wording but also at the entertainment factor of songs. Santoshi can also be credited for popularising musical comedy in Indian cinema. His witty playful lyrics with words that went beyond meaning-making, but added to the rhythm of the song made them very popular, such as in the songs for Sargam.

Santoshi quit film-making to focus on creative pursuits. However, his later years were marred by financial difficulties. He also had a brief stint in the Tamil movie industry, which is where he met his second wife from whom his son, the director Rajkumar Santoshi was born. Later Rajkumar Santoshi claimed that the last years of his father were spent ghost-writing for Telugu dubbed films.

He died of kidney failure in 1978 leaving behind a stellar body of work.