It is a story of today's world the modern day Bombay. There is that young boy from the village who has come to Bombay to become a hero of the world of celluloid. He dances around in discos in the hope that some one would spot him. APMAN will be lesson to all the youngsters of today who dream of the glamour of Bombay but do not realise the squalor and poverty of the slums where they have to put up.

APMAN shows how men with strength have no wealth and they take to the anti social life because their dreams are high. One such man is Manka. Their thirst for illegal wealth makes them the vermins of Society, the insects that eat away the infra-structure of society-with their black deeds.

No deed is bad to them, for all that matters to them is money and for it they are ready to do anything-even murder and rape they do not stop at !  But Manka is not satisfied at the way things are - money is not pouring in because stolen goods have no value in the open market. He needs a man who can turn his BRASS INTO GOLD.

There is Roshan Seth - a wealthy man - who has the stamp of respectability on him but is as bad as a man like Manka. He has not even hesitated to use his wife to satisfy the lust of his superiours so that wealth might come to him. Roshan Seth's character is so very realistic that the bold way in which he is presented in APMAN will be an eye opener to many.

APMAN is a story which will reveal to us the most deadly of tales which go on in the slums while we dream of the skyscrappers. The danger and evils these poor people have to go through to even save their basic wants of life-food shelters and clothing. There are cases of murder and arson but none dare do a thing because of the fear of their life.

Those who dare to raise their voice are ruthlessly done away with.

APMAN is the story of today's young girls who hop from disco to disco. Their love has no depth. It is a sort of who's hooked who. To make their friends envious they hang on to pop stars and show off to their friends. They are not interested in their boy friend's life and need him only as a disco dancing partner. The heroine acts fresh with the hero just because she has seen him a few times and is his fan. The subtality of love which has totally vanished from todays world and has been replaced by sexuality has been shown in APMAN.

The position and purity of the Indian woman has been encouraged upon in APMAN. Bhavna the ideal wife of the uncouth, rich man of the movie is shocked when her husband asks her to go and satisfy his boss on their wedding anniversary and plays nasty with his own sister in law in front of his wife. Money comes before all chastity in todays life.

The evils of illicit liquor and the danger of consuming them has been shown to the audience with the help of beautiful ANTI LIQUOR SONG AND DANCE SEQUENCE.

All these social values which today's world's throwing to the winds has been captured APMAN and the masses are taught a lesson in a very entertaining and commercial way. They are taught not to do the APMAN of Society.

APMAN deals with all aspects of life in short. It shows the world the

- glamour of enpursuit of which the hero has come.

- the crooked deeds the rich business man do to acquire his wealth.

- the poverty and Rigours of the slums where the vermins of society breed.

- the insult and blow to an Indian wife because she wants to be chasti.

- the puppy love and shallowness of today's teenagers. 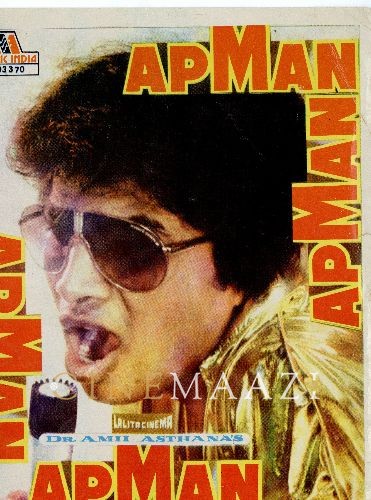