Ram, Rahim and Raymond are the three friends who have come to Bombay city from different places with each of their own ambitions to become popular singer and popular music director and to achieve the public craze. They are living happily and helping needy and greedy people surrounding the place where they are living. They have approached many film producers and music directors with their music talent and each and every day they are expecting the call from them and passing the days badly.

Unexpectedly one day Asha meets Ram, Rahim and Raymond in some incident. Asha comes to Bombay city to find a job in her father's friend's office, unfortunately, he has transferred to some other town and his house is locked. She doesn't know anything or anybody in that city and she is unable to find where to go and where to live. At the first moment Ram, Rahim and Raymond refused to give shelter to her, but finally, they allowed her to stay with them as a guest.

Asha also has some music talent and she encourages Ram, Rahim and Raymond and even she is trying to get them good chances in films and any other functions.

Why Police arrested Ram, Rahim and Raymond and what is the reason behind the arrest.

Why Asha come and stays with Ram, Rahim and Raymond and what is the relationship between them.

Did Asha love any of the other person? If it is! then who is her lover.

Did Ram, Rahim and Raymond get any film chance and achieved their ambition.

To know all these facts see the entire picture of "Baharon Ke Manzil" and don't tell the subject to others. 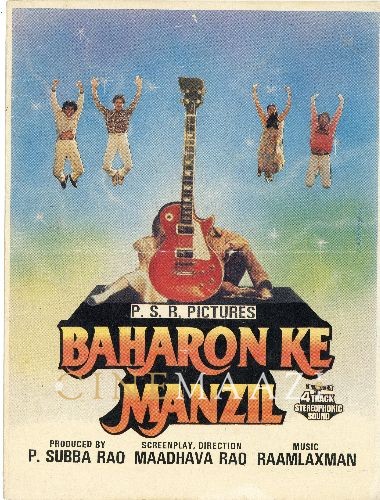