Greed - for anything, may it be money or flesh or never-ending lfe. Greed is a sure way towards destruction.

This is the story of a Tantrik who wanted become immortal and thus he sacrificed eleven innocent girls, by raping them - sucking their blood and thus killing them. Now, he is hunting for the last and the twelfth victim after which he can live forever!

One day a pretty girl called Monali comes to him to help cure her father. The Tantrik falls for her beauty in such a way that he tells her his dirty secret and even tells her that if she as a woman can have sex and kill twelve men she too can become mortal. Now, Monali also becomes greedy and she kills the Tantrik as her first victim. She wants to kill the

Tantrik's disciple too, but he is too smart for her. He promises to help her to find the men and thus his life is saved. Thus started the game of death and deceit which God an all good men do not like.

When Monali's uncle heard of his nieces horrendous game plan, he went to a Sadhu and asked him to help Monali, but the Sadhu said there was only one thing to save her and that was Death. So, the uncle and the sadhu planted three nails in Monali's head and killed her and went to bury her. When her uncle, Anil Dhavan went to bury her there was a sudden Thunder storm... After 20 years...

Some digging was taking place in the hills where Monali was buried. The engineer found Monali's body and fell in love with her innocent face. He did his best to help her and brought her back to life by removing three nails in her head. The engineer's lover Poonam Das Gupta did not like this, but she could not do anything to stop Tarun.

As soon as Monali was alive she started her dangerous game once again... Tarun promised that he will force Monali to die... and then there was a fierce battle between Monali and Tarun.

What was the result? Who won, Tarun or Monali? What happened to the Tantrik's disciple?

To know the answers to all these exciting questions you must see 'CHUDAIL'. 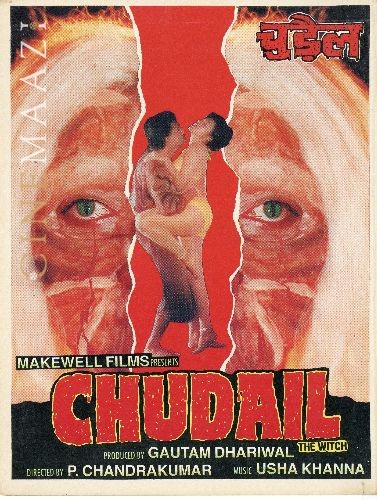