Money leads men to commit ugly crimes. But the crime committed by Lobhi Chand was so abominable that it is nearly impossible to find its equal in human history. This cruel person left his own nephew, Sharad, unattended off his society and stricken with plague to die in the grip of extortionate torture of burning fever. His young and innocent niece, Shiela was confined in her room with her hands and feet tied down and the room was set on fire. He did this all to usurp the vast property left to them by their parents.

But the heavenly power which is greater an stronger than that of all the evil-doers appeared in the person of Dr. Mohan, a friend of Sharad and saved Sheila from the horrors and brought her to Bombay.

Sheila's escape was a signal to Lobhi Chand to set his heinous designs in motion again. He further secured the help of the Police to get Sheila back to the custody, in capacity of the uncle and lawful guardian. But Mumtaz, an intimate friend of Mohan improvised a lie and thwarted the plans of Lobhi Chand. By the help of the same improvised lie, Mohan and Mumtaz recovered from Lobhi Chand Sheils's wealth and property.

Dr. Mohan's kindness to Sheila kindled love in her mind. Circumstances presaged for them a very happy future and expectantly, they waited for the moment when fate would unite them in wedlock. But all of a sudden their happiness was turned into grossest misery.

Mohan's intimate friend Mumtaz had succumbed to the fascination of an evil dancer, Heera. She led him so very astray that Uzra, Mumtaz's faihful and loving wife had to sacrifice her life to bring Mumtaz back to his normal behaviour. Heera's venomous influence not only did kill Uzra, but also played havoc with Mohan's life. In trying to save Mumtaz, he fell a victim to Sheila's misconception and the beautiful place of love they had built for themselves was reduced to dust.

Meanwhile, Lobhi Chand had got Rajni his keep and accomplice, employed in Mohan's house to serve as lady companion to Sheila. The satanic person enticed Sheila into revealing the secret of that improvised lie which had saved Sheila and her property.

The result of it was that one morning she woke up to find herself in the custody of her blood-thirsty uncle. Mohan was also arrested on charge of black-mailing.

So step by step, Lobhi Chand had driven away all of Sheila's friends from her and was closing his fatal grip upon her life when providence intervened.......!

And what happnened? Come and see it in Navin Pictures' maiden hit "DOST". It is directed by Syed Shaukat Hussein Rizvi. 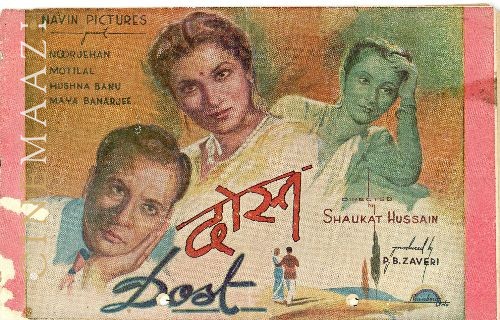