Kannagi was based on the famed immortal Tamil epic ‘Silapathikaram’ written by prince-turned-ascetic poet Ilango Adigal.

Once an argument crops up between Lord Shiva and Goddess Parvathi as to who is more powerful. Irritated with Parvathi’s argument, Shiva curses her to be confined to live in an abandoned temple. A merchant offers prayers in the  abandoned temple against the orders of the Pandian king. The angry king orders the merchant’s execution. This angers the goddess, who decides to avenge his death. The head of the dead merchant is transformed into a fruit and eaten by the wife of Machottan, who conceives and delivers a boy Kovalan. The goddess is born as king Pandian’s daughter. However, when astrologers foretell that she will be responsible for the tragic end of the Pandian dynasty, she is abandoned on the banks of the river Vaigai, where she is discovered by Machottan’s friend  Manakkan and is raised by his family as Kannagi.

Both Kannagi  (P. Kannamba)  and Kovalan  (P.U.  Chinnappa)  grow together and are married at an appropriate time. But before their marriage is consummated,  the Chola king forces Kovalan to accept courtesan  Madhavi  (M.S. Saroja)  as his wife as a garland thrown by her during her dance performance had fallen on Kovalan and she had earlier taken a vow to marry the person on whom the garland fell. Though Kovalan goes with her without any interest, soon  Madhavi’s love transforms him; he also starts liking her and in the process, neglects Kannagi.  He spends all his wealth on Madhavi. Once a  misunderstanding takes place between them,  so Kovalan leaves Madhavi and returns to  Kannagi. By then, all their wealth is lost. Kovalan and Kannagi leave their hometown and reach  Madurai, hoping to start a new life there.  Kannagi, who was left with just her ankles, hands one over to Kovalan to be sold in the market for money to commence a business.  At the same time, the Queen’s anklet (looking identical to Kannagi’s) is handed over to a  goldsmith for repairing and is lost at the residence of goldsmith Vanchipathan. When  Kovalan is trying to sell the anklet through  Vanchipathan, Vanchipathan informs that  Kovalan is the thief (to escape from the king’s wrath over the queen’s missing anklet).

King Nedunchezhiya Pandiyan believes  Vanchipathan’s words and does not provide an opportunity for Kovalan to prove his innocence; he orders Kovalan’s execution for stealing the anklet.  On learning this, Kannagi rushes to see  Kovalan and makes him reveal what happened. Thoroughly angry at his unjust execution, hell-bent on revenge, she reaches the king’s court and proves to the king that the anklet with Kovalan was hers, by breaking open both the anklets. The anklet that Kovalan was carrying carbuncles (rubies)  inside while the anklet belonging to the queen had pearls inside. The king and queen realize their mistake and die, but an angry Kannagi curses the king and the kingdom, and the city burns. Later, she regrets her anger which killed even innocent people. By then, Lord

Shiva appears, reminds her of her true identity, and unites with her. Ever since then, Kannagi has become the epitome of chastity.

The film ran in over 110 cities in one year and more than one crore people have seen the film in theatres. The film was adjudged as the best film of the year. 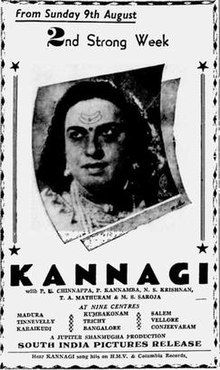