Mangal is Mr. Right. Right in whatever he talk; whatever he does. And that, exactly, is the problem. Whatever he does, may be right to common man, because Mangal cannot be a silent spectator if something wrong is done around, but, sometimes that may be against the law. His sister Vijayalakshmi is a police officer. A law maker and a law breaker cannot live under the same roof, so he decided to stay separately.

With the help of his friend Mansukh, Mangal gets a job in a night club. The night club owner's daughter Rekha falls for him. Soon through the club owner, he meets Parmeshwar, who is a "DON" in Versova, and starts working for him.

Vijayalakshmi does not like any of Mangal's activities. She gets herself transferred to Versova became her husband Ashok Kumar, who was police officer, too, was last posted at Versova and his whereabouts are not known for a long time. Actually Ashok had been killed by Phillips, the hitman of Parmeshwar.

At Versova Vijayalakshmi vows to bring Parmeshwar's illegal activities to an end, but soon she lands up in jail, charged with murdering Balram and Shivram, two small time gangsters, who were rivals to Parmeshwar.

Now Mangal decides enough is enough. He has to bring the real culprits into book. And he has to prove that his sister is innocent

Will he succeed in his mission....? That is the million dollar question...... Answer lies in the climax of "KANOON KA KHILADI".

(From the officila press booklets) 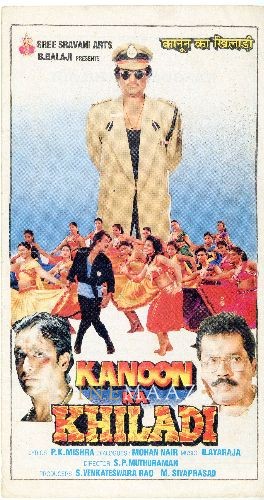