The story KOYLA is set on a background of coal mines. The supreme emperor of which is Raja (AMRISH PURI). The innocent people look up to Rajasaab and worship him like a God. But the monstrous, to faced Raja alongwith his eccentric brother Brijwa (SALIM GHOUSE) secretly terrorize, kill and rape those very people. Shankar (SHAHRUKH), who is swifter than hunting dogs and faster than speeding train is a humble and mute servant of Rajasaab and unaware of Raja's evil ways, serves him like a mere slave.

Then one fateful day, Raja's eyes falls upon Gauri (MADHURI) a simple village belle. Driven by lust to possess her, he conspires to marry her by sending a photograph of Shankar along with a marriage proposal. As fate would have it, Gauri instantly falls in love with Shankar and fantasizes about being his bride.

Events progress to the marriage day...when suddenly Gauri spots Shankar's face in the crowds. She snatches the sehra off, and to her horror fines the old wrinkled face of Raja. As she faints, he grabs her and completes the ceremony.

Gauri is caged and kept under guard at all times as she never submits to Raja. One day she tries to hang herself when Shankar breaks into her room and saves her. On seeing him, Gauri breaks down and accuses him for destroying her life. But after learning the truth, she comes to his hut that night. Words are not spoken, but their hearts understand, there she lights a flame in front of the Gods. A flame of love which would envelope them both in fire.

Gauri's brother who is based in Dubai learns of her marriage and comes to see her. Gauri, inspite of all the torture, puts up a smiling face. But Shankar could not hold back any more. He stops her brother from leaving and tells him everything. But his attempts to rescue his sister goes in vain, he is killed. But while dying he turns to Shankar and pleads for him to take his sister away from that hell. In an instant all the years of torture, slavery and pain focus onto his love...he turns to Raja in a frenzy of rage, rises like a volcano, grabs the hand of his lover and runs away with her.

Helicopters, army jeeps, armed gunmen, the Raja uses everything in is power to hunt Shankar and Gauri out of the jungles. Finally through a trick they fall prey to Raja. The innocent Gauri is shot and Shankar is brutally beaten and thrown off the cliff.

Shankar and Gauri are separated. But does the tale end there? If yes, then who is killing all of Raja's man one by one? Has Shankar returned from the dead? Who is the person terrorizing the Raja with his voice? Could Shankar have miraculously gotten his voice back too?

If undying faith can move mountains, if true love can overcome all obstacles and if revenge is God's will...then Shankar is back!

Back to his life.

Back to his love.

Back to finish and old forgotten story.

A story that began with one single piece of coal! 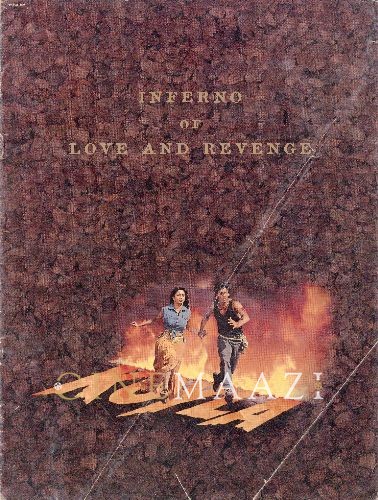