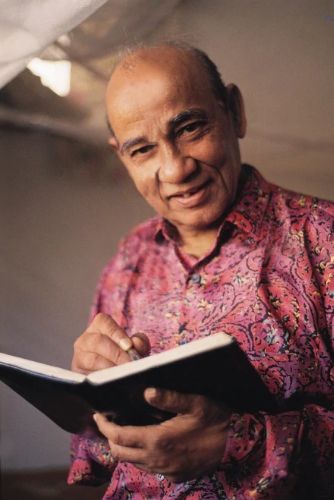 A noted lyricist who worked sincerely yet unobtrusively, penning over 1000 emotional songs as well as peppy numbers, Indeevar was one of the leading lyricists of the Hindi film industry. Active for over four decades from the late 1940s till the mid-1990s, he worked with a range of composers, including Roshan in the 1940s to Aadesh Shrivastava, and Jatin-Lalit in the 1990s,enjoying the longest association with Kalyanji-Anandji during the 1960s that continued into the 1970s and early 1980s. Known for composing various memorable numbers such as

Named Shyamalal Babu Rai, he was born in Dhamna village of Uttar Pradesh, and grew up in Barua Sagar in Jhansi District. A freedom fighter who also wrote under the pseudonym Azad, he had also been sent behind bars by the British. In jail, he studied several languages including French, Persian, English, Hindi and Urdu, and was inspired by Voltaire and Kalidas.
Moving to Bombay in the 1940s, to pursue a professional career as a lyricist, he landed his first assignment, Double Face (1946). He wrote his first song by his original name, Shyamlal Babu Rai. However, he was advised to change his name to Indeevar and that is the name he went by for the rest of his life. Double Face was followed by Justice Chowdhary (1946). Working in a slew of low-graded film projects, he received his first real break with Malhaar(1951), which also launched the career of music duo Laxmikant-Pyarelal. The film featured such gems as Barre armanon se rakha hai balam teri kasam, Ik baar agar tu keh de or Kahan ho tum zara awaz do, the duets by Lata and Mukesh as well as solos by Lata such as Koi to sune mere gham ka fasana and Muhabbat ki kismet banaane se pehle zamane ke malik tu roya to ho ga, and two fantastic solos by Mukesh, namely Dil tujhe diya thha rakhne ko and Taara toote duniya dekhe. In the years that followed, Indeevar bonded with a set of filmmakers and music directors, to create a collection of music that is hummable, evocative and memorable.

The 80s saw his earlier mellow tone change to a zingier, peppier note as he worked with music composer Bappi Lahiri. He moulded his craft to suit the changing taste of audiences, coming up with crowd-pleasers such as Naino main sapna from Himmatwala (1983), and Tohfa tohfa laaya laaya from Tohfa (1984). These songs could be called naughty but never cheap or vulgar. His last projects included Rajesh Roshan's films Karan Arjun (1995) and Koyla (1997).
Indeevar passed away on February 27, 1999.