CALL what we may, marriage remains a mirage. But humanity still owes its inspiration and contentment in it!

Out on the forest border of Udaynagar state, Judhajit the most dreaded outlaw was lost in deep thoughts. His heart was brooding over revenge — revenge which has ever been the glory and destruction of a Rajput —revenge on the royal family of Udaynagar!

On rode a messenger, a spy in Judhajit's employ with the news that Satrajit, the prince of Udaynagar had started in procession from his capital to marry the beautiful princess Chandra of Rajnagar, the most powerful neighbouriong state. Judhajit's lips curved His fingers clenched. He saw the opportunity he was waiting for years to bring into shame and disgrace the royal family of Udaynagar. His mind's eye saw a dreadful vision of twenty years back. He was the younger brother of the late king of Udaynagar. For a trifle he was insulted, maltreated, humiliated—his whole family was massacred by the orders of the king. his own brother, till –till...he lifted his mighty arms against them in revenge, till he took possession of the elder of the twin sons of the king and ran far away from the courtly sins and injustice. Many a time, he had tried to satisfy his revenge by killing the royal baby but the innocent and divine smile of the baby had made him forget his mission and .....

Well ! the messenger was gone. Judhajit woke up from his reverie. He called Indrajit. What a strong handsome youth he was! Judhajit look-ed at him in silent admiration for a time and then ordered him to carry away princess Chandra from the palace of Rajnagar so that Indrajit himself might marry her instead of the prince of Udaynagar who would thus be left in utter shame and disgrace.

When the dead calm of the night was looming over the bewitching palace of Rajnagar a lady was trying silently to sneak out of the royal gate. She was princess Chandra, in person. Chandra who had heard a rumour that the prince Satrajit of Udavnagar was a man of loose morals had determined to escape the impending misery of her marriage by going out of the palace in the guise of a maidservant. Romantically bent was she, but her progress abruptly came to an end when a strong handsome youth stood before her. He was Indrajit.

Slow and silent the conversation started between two souls thus brought together by Fat but each ignorant of the identity and the mission of the other. There was fun in the meeting and the calm atmosphere bathing in the inspiring moonlight worked out its magic on two innocent youthful souls. Their hearts and eyes talked the eternal language. Both were irresistible to each other.

Chandra gave out that she was the chief maid to princess Chandra and Indrajit told her that he was the personal friend of the prince of Udaynagar and would be obliged if she would help him to see the princess Chandra secretly. For the sake of fun, Chandra agreed. She led him to the window of her apartment and pointing to her companion Nanda she gave out that Nanda was the princess Chandra. Indrajit saw "the princess" but he seemed to be more interested now in the so-called "maid". What was the use of taking away such an unbecoming princess whom he could never love? His heart revolted. He gave up the idea for which he had come and took leave of the beautiful "maid" he had luckily met that night.

Chandra also gave up her mission. Her mind was full She hastened to confide the secret to Nanda, her dear companion. When Nanda suggested that this young man might be the prince of Udaynagar in disguise, Chandra, though surprised, could not disbelieve her. He had given out that he was the personal friend of the prince. But his royal bearing, his chivalrous talk, his sparkling eyes, Chandra thought, should belong to none less than the prince himself. How foolish she had been to run away from her marriage when she was destined to such a handsome and smart prince!

Chandra decided to take the decrees of Fate cheerfully and agreed to the marriage. Out in the Udaynagar camp, however, the shrewd Divan had managed in the meantime to capture some of the dacoit spies of Judhajit and as Indrajit, on learning this, ventured to their rescue, he himself was taken a prisoner and brought before the Divan. Divan's surprise knew no bounds when he found the marked physical resemblance between Indrajit and the Prince. He tried to find out the identity of the dacoit, but failing in that, simply remanded him to custody awaiting further orders.

With the rise of the sun bloomed the marriage day with all its splendor and royal extravagance. But where was the bridegroom? The hapless Prince of Udaynagar had played a tool in the hands of the wily dancing girl Nazma and had overdrunk himself so much so that at dawn he was found senseless and absolutely unfit to be presented as the groom.

The poor Divan was in a fix. But shrewd and intelligent as he was he quietly hit upon a plan and secretly went into the prison. He persuaded Indrajit to impersonate the prince and the complete marriage rites in the name of the prince. The Divan promised Indrajit his liberty in return and assured him that nobody would suspect him as he resembled the prince so completely.

And so the marriage took place! Before the sacred altar sat Chandra and her life-companion whom she had known at a glance to be her lover, the youth of her dreams. she was overjoyed. But what a surprise it was to Indrajit when he saw his own beloved "maid" in the garb of a princess!

What a cruel irony of Fate! And what an intense tragedy? He had unconsciously been a party in completing the marriage of his own sweetheart to the drunkard prince of Udaynagar! He had gone himself through all the marriage ceremonies in the name of another! - for the sake of another ! — a terrible secret! And now he had no rights on her!

The poor youth was maddened—desperate! He ran to the minister and tried to get out of the entangle, but the release was now impossible. He had been a party to a secret intrigue, and must now carry on whatever the consequences!

Unwilling as he was, he had to play the role of the husband—to accept the fondlings and caresses of the lovely beautiful princess—so neer to him yet so distant! But then, his heart revolted at the idea of constantly deceiving the woman he loved. He could not suffer real love to thus insulted by his own self!

The tragedy becomes all the more intense when the newly married bride had to meet the drunkard prince on the first honeymoon night--who now beam to assert his husband's rights over the poor girl—a terrible climax with breathless suspense—and the intense dramatic thrill that follows later—are better to be seen on the screen than related now.

Sabitadevi's acting in this intensely dramatic story is something far superior to what has hither been seen of her. The dual role played by that charming youth Motilal is something which no screen--fan can ever forget. 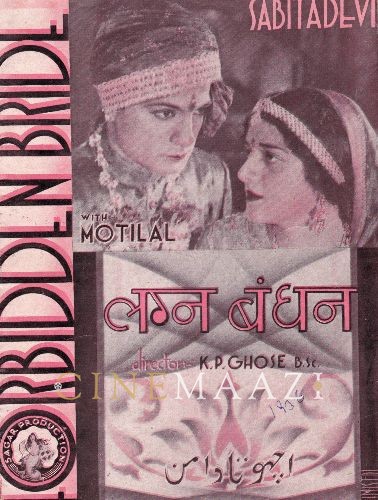 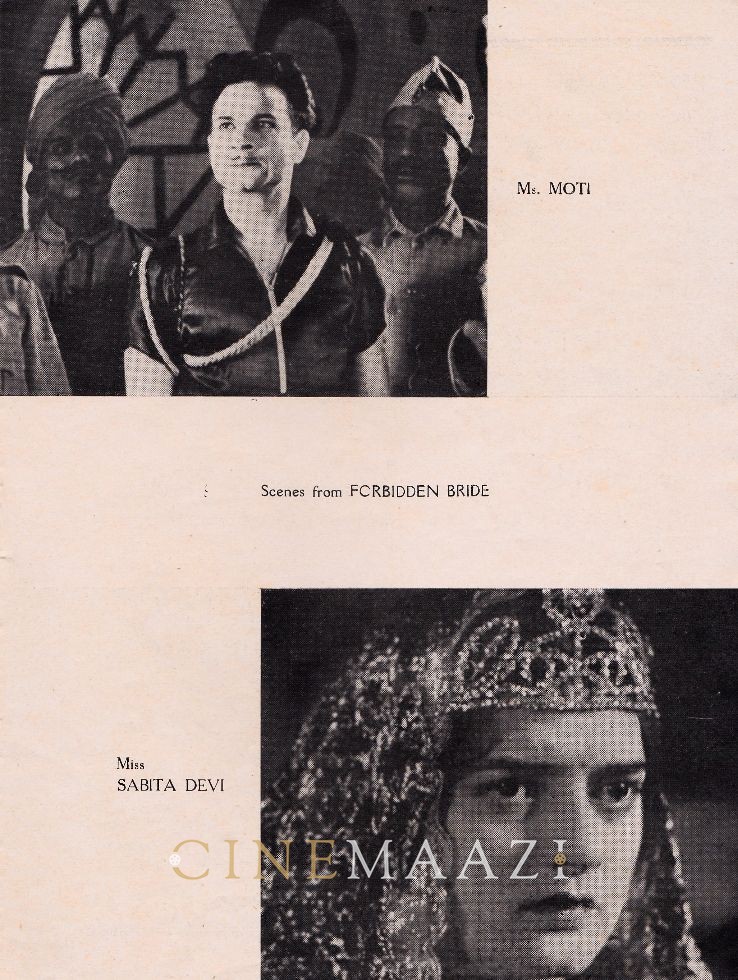 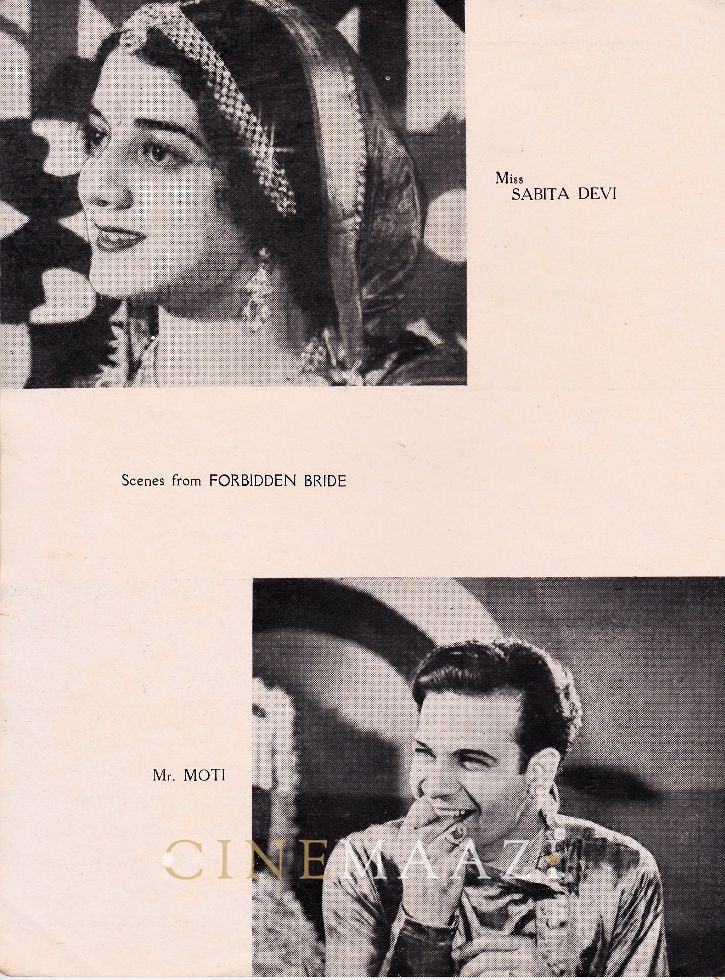