Sokkesa Mudaliar (D. Balasubramaniam) goes out of town looking for a suitable groom for his daughter Poongothai (P. Bhanumathi). Mudaliar’s nephew (younger sister’s son) Veerarajan Mudaliar (Sriram) sends his henchman Kathavarayan (E.R.  Sahadevan) to kidnap Poongothai as he is keen to marry her though Sokkesa  Mudaliar is against the marriage. When Kathavarayan’s men are kidnapping her,  Malaikkallan (MGR) disguised as an old man, intercepts them, and rescues her.  Kathavarayan attacks them again the next day, but Malaikkallan fights and saves her.  Poongathai develops trust in the old man and goes with him to his hill bungalow.

On reaching the bungalow, Malaikkallan removes his disguise, and Poongothai is surprised to see a smart young man. At the bungalow, Poongothai is taken care of by his relatives. When she insists to be sent back home, he promises to send her at the right time when there is no threat from her enemies. The new Sub  Inspector (SI) (M.G. Chakrapani) of the town is hunting for Malaikkallan, who has several cases of robbery and murders pending against him.  Malaikkallan steals the jewels stolen by Veerarajan and Kathavarayan from various people and keeps them. Abdul Rahim (MGR again) is a rich businessman.  When Poongothai keeps requesting to be sent back, Malaikkallan plans well and sends her in Rahim’s wagon.

The police come to know of this and follow the vehicle. However, Malaikkallan, knowing enemies may attack, plans differently and safely makes her reach home in the disguise of a horse rider. The SI gets a  doubt and enquires from Poongothai. She informs the police that Malaikkallan is the Good Samaritan who saved her from Kathavarayan’s people and sent her home through Rahim. When the SI meets Rahim to know their relationship,  he also confirms that Malaikkallan is a good person and promises to help the  SI in solving the cases. When SI complains about the pending cases against Malaikkallan,  Rahim assures he will provide evidence on  Malaikkallan’s innocence in these cases.  Kuttipatti Zamindar, who borrowed money from Sokkesa Mudaliar, visits him and invites him to Ariyapuram for settlement of dues.

Sokkesa Mudaliar goes to meet him, but no information comes to his family even three days after he has left. Poongothai complains to the police about her missing father. The SI investigates the case. Sokkesa Mudaliar was actually kidnapped and kept in custody by Veerarajan, Kuttipatti Zamindar, and  Kathavarayan. They coerce him to permit Veerarajan’s marriage with Poongathai.  Mudaliar refuses and is forced to remain in their custody.  Planning to kidnap  Poongothai, Veerarajan asks his lover Janaki to bring her along with Kuttipatti  Zamindar’s documents by promising to help  Poongothai in tracing her father. Janaki,  who is a friend of  Poongothai, convinces her to come along with her.

On reaching Veerarajan’s home, instead of helping her, Veerarajan tries to molest her.  When his lover Janaki, who brought her there, intervenes,  Veerarajan kills her.  By then, Malaikkallan arrives, saves Poongothai from  Veerarajan, and drops her back in her home. The old man whom Malaikkallan respects falls sick. He hands over all the stolen jewels to Malaikkallan and asks him to return them to their owners. Meanwhile, Veerarajan and Kathavarayan,  who come to know the hill route to Malaikkallan’s place, follow him and try to kill him when he is on the winch  (ropeway). However, he escapes. Rahim calls the SI,  returns the jewels to him, and informs that Malaikkallan has given them to be returned and also mentions that  Malaikkallan knows the hideout where Mudaliar is kept.

In the meanwhile, the SI also gets a threatening letter written by Veerarajan to Poongothai that if she does not agree to marry him, he will torture her father.  The police team surrounds Kuttipatti Zamindar’s house,  Rahim and SI go inside and attack Veerarajan and his gang.  When they are counterattacked, Malaikkallan also arrives,  rescues them from Veerarajan and his gang, and then vanishes. SI arrests Veerarajan and his gang with the help of other police and rescues Sokkesa Mudaliar who was tied and kept in custody by Veerarajan. The people who were assumed to have been killed by Malaikkallan turn up unharmed and report to the police, surprising them. The  SI meets Rahim and expresses his happiness that all the pending cases in the town have been closed and thanks to him for his help. He also informs that all cases against Malaikkallan have been dropped and he is free now.  Mudaliar hosts a dinner for the SI and Rahim on his safe return.  After the dinner, Rahim expresses a desire that  Malaikkallan should marry Poongothai.  Sokkesa Mudaliar and his sister Kamatchiammal  (P.S. Gnanam) object,  stating that they cannot get their child married to a stranger. Now Rahim reveals the facts about Malaikkallan.

30 years back, Ganesha Mudaliar, husband of  Kamatchiammal, was killed by robbers. His brother  Kanakasabai Mudaliar brought some people together and took revenge on the robbers. He became Malaikkallan and stole from rich people. 12 years back, when a tiger landed in town and created problems, Kumara Veeran, the 15-year-old son of Kamatchiammal, went to see it. When the tiger chased him, Kumara Veeran attacked it courageously.  His uncle Kanakasabai Mudaliar, who had seen this act,  took him home and brought him up. Kamatchiammal is overjoyed that her son is still alive and he is Malaikkallan now. Poongothai is also happy that Malaikkallan is none other than her own cousin. They request Rahim to bring  Malaikkallan soon to their home. The next day, Rahim again comes and after some drama to surprise Poongothai,  removes his disguise to show that he is Malaikkallan and also Kumara Veeran. Everyone is happy and Kumara Veeran and Poongothai get married. 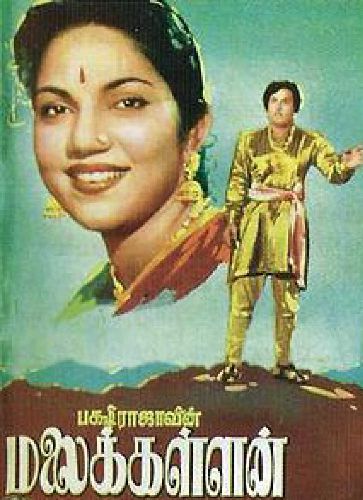