Radhai (T.A. Mathuram), a widow, makes a living by supplying food. Bhagavathar  Balu (T.S. Balaiah) gets attracted by her. After giving her false hopes, he establishes a relationship with her; when she conceives, he abandons her. Radhai leaves her village and faints near an ashram-cum-orphanage. The inmates admit her and she delivers a boy. Meikandar, (N.S. Krishnan) a teacher in charge of the ashram, offers her a job at the orphanage which she accepts.  Parandhaman (D. Balasubramaniam) is a rich man and the patron of the orphanage. He is very fond of his only daughter Kumari (Padmini).

Bhagavathar  Balu is hired to teach music to Kumari. Vijaya (Lalitha), the young wife of  Parandhaman’s accountant, evinces interest in music and the accountant permits her to attend music classes reluctantly. Kumari is engaged to her cousin  Chandran (S.V. Sahasranamam) who proceeds to London to study law. Balu casts his eyes on Vijaya; bored with her aged husband, she also reciprocates.

Chandran returns after completing his studies and his marriage is fixed with  Kumari. Balu gets disappointed in coming to know this, as he had ambitions of marrying Kumari, swindling her wealth, and leading a comfortable life. Balu’s friend Varadan (T.S. Durairaj)  motivates Balu to confess his love to Kumari before it is too late. While taking a  class for Kumari and Vijaya,  Balu suddenly breaks down and tearfully expresses his love for Kumari. This shocks her, as she respects him as her guru. She advises him to change his mind, but Balu persists in declaring his love.

Chandran, who arrives at the scene, loses his cool on witnessing this and starts beating Balu for daring to propose to a girl who is already engaged. Kumari interrupts and tells Chandran that it is not the right way to express his anger. This leads to Chandran assuming that  Kumari has a soft corner for Balu and she lost interest in him during his absence, so he questions their relationship. Kumari gets upset at his lack of trust in her and starts arguing with Chandran. In a fit of anger, she states it is better to marry a person like Balu who is deeply in love with her rather than a suspicious person like Chandran. Chandran leaves angrily; Kumari, who is hurt by his reaction, sticks to her decision and insists on getting married to Balu despite her father advising against it.  A day before Kumari’s marriage, Radhai comes with her son to offer her best wishes.

On seeing Balu there, Radhai tries to reveal the truth to Kumari. But Balu beats her and her son Alagiri and talks badly about Radhai’s character.  Since Alagiri is badly injured, she takes him back to the orphanage, where he dies. Parandhaman performs Balu and  Kumari’s wedding in a simple manner. When Balu expresses his inability to provide a decent living standard for Kumari,  he transfers his assets in Balu’s name with a condition that  Kumari would have the decision-making powers. When Kumari visits the orphanage to offer her condolences to  Radhai, she overhears a conversation between Meikandar and Chandran and learns how Radhai was cheated by Balu.  Kumari returns home and faints on a nuptial night; the doctor declares her unfit for a marital relationship. Balu gets very annoyed with this development; Kumari avoids him completely and hands over a signed checkbook for his use. Balu spends money lavishly and enjoys himself with  Vijaya.

The accountant, on learning their relationship, leaves home disappointed.  Unable to witness these happenings, Parandhaman goes on a pilgrimage. Chandran comes to caution Kumari about  Balu. On seeing Chandran with her, Balu accuses Kumari of having an illicit relationship with Chandran. After Chandran leaves, he tries to force himself on Kumari. She uses the gun left by Chandran to threaten Balu and throws him out.  She withdraws all facilities enjoyed by him and decides to donate all her wealth to the orphanage. To prevent Kumari from doing this, Balu joins hands with Varadan and Vijaya,  hatches a plan, and tactfully takes Kumari to their forest bungalow. Radhai, who follows them, informs Meikandar about Kumari’s abduction. Meikandar and Chandran take the police to the forest bungalow, where Balu forces  Kumari to transfer all her properties in his name, beating her when she resists. Chandran fights with Balu and the police arrest Balu and Varadan. Vijaya, who tries to escape, gets injured and is rescued by her estranged husband.  Kumari dissolves her marriage and marries Chandran with her father’s blessings. 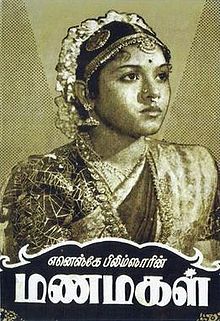