Sarasu (Raadhika) born to a rich eccentric businessman Badrinath (Dakshinamurthy) is a mentally challenged child. Unable to cope up with her condition, Badrinath admits her in a home for such children and is taken care of by a Christian Missionary Principal (Charu Hasan) and a guardian Juju thatha (Ronnie Patel), a kind old man. Sarasu meets Ganapathi or Guppi (Pratap Pothen), another intellectually challenged orphan and they strike a rare affection for each other and become inseparable.

Years pass by; Badrinath and his wife come to take Sarasu for their son's wedding engagement. Sarasu innocently insists that Guppi should also accompany her and Guppi is reluctantly accommodated at the insistence of the Principal.

At the wedding party, Guppi and Sarasu bump into, the engaged couple and notice their clandestine affair. Sarasu insists her parents get her married to Guppi. In a weird twist of things the idea appeals to the guests and Badrinath agrees and Sarasu and Guppi's marriage takes place.

Guppi and Sarasu are sent to Korakunda, a mountain village along with Juju thatha as their guardian. Korakunda is an unusual village inhabited by strange people - Manohar (Y.G. Mahendra), the photographer with a vintage tumbled-down box camera who specializes in taking the photos of the dead for the bereaved, Nylux Nalini, a footloose woman who has illicit affairs, Kitney, a person of indeterminable age who flies kites, the village headman and a few others.

Guppi and Sarasu get into a physical relationship and Sarasu becomes pregnant. One day in the woods, the drunken village headman tries to molest Sarasu, and Guppi who sees it crashes a boulder on his head and kills him. Guppi is condemned for life in jail. Sarasu, separated from Guppi is in distressed agony. She is admitted for delivery in a hospital and Guppi on special permission visits her. In their own innocent way they try to relieve their past happier moments. She dies delivering a baby.

Guppi unable to understand death tries to revive her and when he fails and finds her motionless, snatches the newly born child and flashes the sharp edge of the blood-bottle menacingly at others. But he is quickly overwhelmed and taken back to the prison. Guppi never talked or laughed after the death of his Sarasu and dies after a few years in jail. 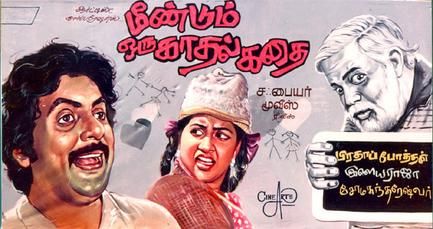