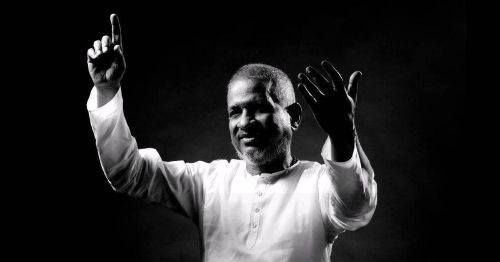 The legendary composer Salil Chowdhury had once said about a young Ilaiyaraaja that he would one day become the best composer in India. To say that he lived up to this prophecy would be an understatement. The progenitor of the most important cultural progression in Indian film music of recent years, Ilaiyaraaja has cemented his place in the pantheon of all-time great musicians with his remarkable creations. The range of artists he has influenced extends from his protégé A.R. Rahman to international stars like the Black Eyed Peas, Meek Mill and M.I.A. He has composed music for over a thousand films in different languages in his five decade long musical career, creating an astounding repertoire of unceasing innovation.

Ilaiyaraaja was named Gnanathesikan at his birth on 2 June 1943 in Pannipuram, Tamil Nadu in a Dalit Christian family. His parents were Chinnathayee and Daniel Ramaswamy, an estate supervisor. His name was later changed to Daniel Rajayya. His musical inclinations were clear even at a young age. He studied only till he was around fourteen, and then joined his stepbrother Varadarajan, a member of the Communist Party, to form a musical troupe called Pavalar Brothers. The Pavalar Brothers worked mostly as a cultural wing of Leftist groups, performing live concerts in their support. Daniel Rajayya created his first composition based on an elegy written by the famed poet Kannadasan for Jawaharlal Nehru. By this time, he had gained some knowledge of rural folk music traditions and wanted to expand his horizons. He travelled to Madras to train in Western musical techniques.

Under the tutelage of the renowned musician Dhanraj Master, he started learning musical instruments and Western classical music in 1968. Most sources claim that Dhanraj Master christened him Raaja. He also undertook a distance learning course from the Trinity College of Music, London. He was further trained in Carnatic music by T.P. Gopalakrishnan, the famed mridangam player and singer.

As a skilled multi-instrumentalist, he soon started working for various composers, including Salil Chowdhury. He joined the Kannada music composer G.K. Venkatesh as an assistant and orchestrator. As his assistant, he worked on over 200 films. In later interviews, he credited this phase as crucial to his training as a music composer, since he found the confidence to start composing original scores around this time.

Ilaiyaraaja finally made his debut as an independent composer with the Tamil language film Annakkili in 1976. Considered one of Tamil cinema’s cult classics, the music of the film effortlessly blended Tamil folk rhythms with Western orchestration. His compositions, in particular the hit song Annakili unnai theduthu marked an important moment of change in Tamil film music. The writer Selvaraj had initially wanted all three of the Pavalar brothers to compose the music, but the producer Panchu Arunachalam ultimately settled on Ilaiyaraaja alone. Reportedly, he also attached the prefix ‘Ilaiya’ to his name to avoid any confusion with the music composer A.M. Rajah. Ilaiyaraaja’s work in Annakkili foreshadowed his innovations for a long time to come. Throughout his career, he did not conform to rigid genre classifications of music. His music exhibited a spontaneous flow between different styles, combining Western classical, disco, Indian classical, jazz, bossa nova and pop influences, grounded in a rich tapestry of popular, local music traditions. Years later, A.R. Rahman would take the nation by storm with his music for Roja (1992), following a template laid down by Ilaiyaraaja. The younger composer had worked with Ilaiyaraaja in over 500 films as a pianist and claims him as one of his major influences.

Within the next ten years, Ilaiyaraaja had established himself as one of the premiere names of the Tamil film industry. His name was such a major draw for audiences that he could command salaries equal to the industry’s top stars. He wrote numerous hits for the films by his childhood friend Bharathiraja (16 Vayathinile, 1977; Nizhalgal, 1980; Alaigal Oivathillai¸ 1981 and Mudhal Mariyadhai, 1985).His compositions for the film Raja Paarvai released in 1981 featured a fusion of Carnatic, Western classical and pop influences and came in for widespread praise. Ilaiyaraaja was known to frequently collaborate with lyricist Vairamuthu and the singer S.P. Balasubhramanyam. But over the course of his long career, he worked with a great number of lyricists and poets like Sreekumaran Thampi, O N V Kurup, Veturi Sundararama Murthy and Udaya Shankar. He also became Mani Ratnam’s choice of composer for his early films and created successful soundtracks for Mouna Ragam (1986), Agni Natchathiram (1988) and Anjali (1990). Some notable songs include Raja rajadhirajan indha raja (Agni Natchathiram) and Mandral vantha (Mouna Ragam). The lauded Kamal Hassan-Saranya crime drama Nayakan (1987) and the Rajnikanth – Mammootty megahit Thalapathi (1991) also featured acclaimed soundtracks by Ilaiyaraaja. He has also collaborated frequently with acclaimed director K Balachander. His other notable compositions were for films like Sindhu Bhairavi (1985), Swati Muthyam (1986), Punnagai Mannan (1986), Sathya (1988), Thevar Magan (1992), Guru (1997) (Malayalam), Hey Ram (2000) (Tamil and Hindi) and Nizhalkuthu (2002) (Malayalam).

Ilaiiyaraaja developed a reputation for his prolific activity. Industry legends abound about the furious speed of his compositions. R K Selvamani claimed that the music for his 1992 film Chembaruthi (1992) was composed in 45 minutes, while Santosh Sivan said that the music for Thalapathi was conceptualized in half a day. He has released two albums – How To Name It? (1986) and Nothing But Wind (1988). Both continued his explorations of fusion between Carnatic and Western classical music. Nothing But Wind was performed by Hariprasad Chaurasia. Ilaiyaraaja’s gift for unexpected fusion is audible in Ilayaraaja’s Classicals on the Mandolins which featured Carnatic kritis composed by him set to an electric mandolin by U Srinivas.

Although he worked extensively in Tamil, Telugu, Malayalam and Kannada languages, his work in Hindi cinema is minimal. He only collaborated in the Hindi language with the director R. Balki. His melodious soundtracks were often the driving force behind the success of Balki’s films Cheeni Kum (2007) and Paa (2009).

Illaiyaraaja has been awarded both the Padma Vibhushan and the Padma Bhushan by the Government of India. He has received five National Film Awards in total - four for Best Music Direction [Sagara Sangamam, 1983 (Telugu); Sindhu Bhairavi, 1985; Rudraveena, 1988; Kerala Varma Pazhassi Raja, 2009 (Malayalam)]. He also won the National Film Award for Best Background Score for Tharai Thappattai (2016). In addition, Ilaiyaraaja has also won four Filmfare Awards South for Bobbili Raja (1990), Thalapathi, Manassinakkare (2003) and Achuvinte Amma (2005). He has been felicitated by the Tamil Nadu, Kerala and Andhra Pradesh state governments several times, and honoured by the Sangeet Natak Akademi for his immense contribution to music.

Having spent nearly five decades in the film industry, the legendary composer shows no signs of slowing down. Without a doubt one of the most influential music composers of all time, his work is a testament to the value of being open to all influences. His injection of folk rhythms into popular film soundtracks changed the status quo of film music. It is the hope of every music aficionado that the maestro continues to enthrall us for years to come.