The last rays of the setting sun were fading away in the distant horizon.

The city of Champa of the 16th century looked like a dreamland in all its pristine splendour. And the decorated 'tanjam', carried on the shoulders of six sturdy bearers with an exquisitely beautiful woman seated in it, who looked more like a Queen than a mere female, fitted in perfectly with the surrounding grandeur of the time and the place. The sharp spears of the four horsemen, who escorted the 'tanjam', glimmered faintly in the dazzled light of the approaching evening.

The procession stopped at the gate of the ancient monastery that stood on the outskirts of the city. The solitary occupant of the 'tanjam' sought entry into the temple, but the gateman informed her that women were not allowed inside.

The woman at once flared up: "How dare you refuse ME entry! Do you know who I am?" And as the gateman gestured his ignorance, she proudly proclaimed: "I'm Rupkumari !".

That magic name would have flung open the gates of the mightiest of Kings, for Rupkumari was the most famed danseuse of those bygone days when Kings and Connoisseurs viewed with one another in gaining her favours. But in the monastery that name had little significance, for its chief priest, Jnananandaji, had enjoined absolute celibacy on its inmates, who were disciplined to practise the hardest of austerities as steps to the purification of the soul. And so the temple gate was closed with a bang on the face of the greatest danseuse of the country !

A virtual Queen of her time who was born to rule over men, Rupkumari's chagrin could be easily imagined at this affront to her prestige by and humble servant of the temple.

She had just arrived in Champa, fresh from her triumphs in other cities, and was an honoured guest at the garden house of Seth Hiralal, richest millionaire of the country and a close friend of the King. Rupkumari had seldom accepted 'No' as an answer from anybody previously. So some discreet wire-pulling secured for her the King's permission to visit the monastery, the chief priest Jnananandaji acquiescing in it.

But on the very day Rupkumari visited the monastery, and incident happened there that turned into defeat her virtual triumph over ecclesiastical tradition in gaining admittance into its sacred precincts. Jnananandaji ordered her out of the monastery at once, and Rupkumari with her retinue came back, a humiliated woman and an enraged tigress !

A woman's scorn is said to is said to be more furious than hell's fire ! And Rupkumari was not  a woman to take an insult lying down. She swore vengeance upon Jnananandaji and decided to strike him where it would hurt him most.

Rupkumari took under her protecting wings a rebellious Brahmachari named Kishore, who had also been turned out of the monastery by Jnananandaji for his failure to put up with the latter's iron rule. He supplied Rupkumari with the information that all Jnananandaji's affection centred round Satyasundar, a young Brahmachari who was chosen to succeed him as the chief priest.

When a woman makes up her mind to entice away a man, woe betides him ! Moreover, there had never been a more guileless man than Satyasudar, a stranger to the wiles of the world. So Rajkumari dound in him an easy prey to her education - but it was not until she took the Saffron grab and put on an air of divinity that the innocent Brahmachari succumbed to her charms !

And Rupkumar's triumph was complete when Satyasundar did not recoil from him her real identity-a dancing girl.

"The glimpses of divinity that I've gained through you, the experience of unknown joy that your company has afforded me cannot be unreal", declared Satyasundar.

But Jnananandaji thught otherwise when he came to learn about his chosen disciple's secret rendezvous with the dancing girl on his return from a visit to his own Guru-the great Swamijiee-who lived in the bosom of Nature, far far away from the din and bustle of the world. The great man's parting message to Jnananandaji had been: "Always do what you think best, - man's best guide is his own conscience." A strict disciplinarian as he was, Jnananandaji drove Satyasundar out of the Monastery, as he had done in the case of Kishore one day, for breaking its discipline.

The elements seemed to have broken loose that night. A fierce gale was sweeping Champa, whose streets were littered with fallen trees and crashing walls. And on that night a foolish woman was celebrating her 'victory' over Jnanananda by throwing a big party to her ardent admirers-all noblemen of the city.

But all her gaiety suddenly left her when Kishore brought the news that Satyasundar had been driven out on the streets and was wandering aimlessly in that blinding storm.

Satyasundar's life was in danger ! Rupkumari had been feeling a growing fondness for the young Brahmachari who had been made a dupe in her mad game of revenge. Not until this moment however had she realised that, that fondness had ripened in to love. Now she knew that she could not live without him.  Without giving any opportunity to her bewildered guests to offer any assistance, Rupkumari rushes out in that terrible gale to being her beloved back to her own home-and her warm heart.

Hours later when Satyasundar was carried back into Rupkumar's residence, he was unconscious. A falling tree had seriously injured him.

Then followed anxious days and wakeful nights, when the woman in Rupkumari revealed herself in a new glory. With a woman's instinctive affection she nursed Satyasundar back to consciousness-and it opened up a new heaven to her love-steeped soul. O, the joy of it! All her triumphs as a danseuse seemed hollow and unreal, compared with the bliss that was now hers.

Seth Hiralal, her patron-in-chief and a constant friend, just watched her transformation with a philosophic acceptance of the situation. Only the Poet, who composed the songs and sang them during her dance recitals, shook his head in disapproval, at the turn of events. The union of a dancing girl and a Sanyasi could never bring forth any good-he muttered to himself.

Love was a new experience to Satyasundar. The first days of convalescence seemed too good to be true - he found himself living in a dream that he had never dared to dream before ! Rupkumari's devotion touched his soul and he drank deep from the cup of happiness that was held before him.

As days grew into weeks, Satyasundar begain to feel that nothing could replace in his heart the monastery, its ideals-and its pursuit for the ultimate happiness in the knowledge of God. He seemed to feel like a fish out of water amid the lavish luxury of Rupkumari's household.

With growing uneasiness, Rupkumari noticed this unrest in Satyasundar's soul. But the hunter had now been ensnared by the prey-and Rupkumari was determined to give up everything for her new-found bliss.

See the rest on the screen. 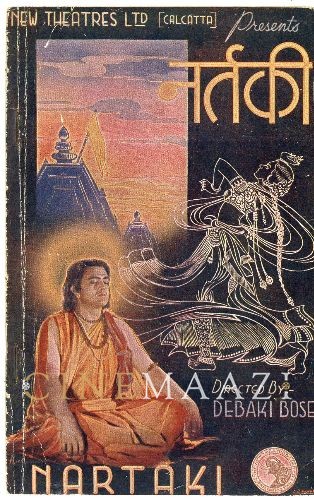