Paandav—It's a story of this Kaliyug's Mahabharat where a city is turned into Kurukshetra, a warfield. But this time on evil side there are two armies of Kaurav's i.e. K.K.'s (Kiran Kumar) mafia and Data's (Surendra Pal) crime syndicate. Both these ganglords are fighting to achieve the throne of underworld king. Day by day their violence is getting bloody, brutal and ruthless. This has become a direct threat to innocent citizens of city.

A cost of living in this city is paid by a lady who's gone to fetch her son from school. But in a blind shoot-out between these two gangs on roads. She gets killed for no reason.

This case is handed over to Inspector Vijay (Akshay Kumar) who during his investigation finds himself standing against city mafia. Vijay continues his war against these Kaliyug Kaliyug  supported by a serious journalist Nisha (Kanchan).

Capt. Stood (Ajinkya Deo) an army officer, comes back to city on getting the shocking news of his wife's death. Realizing that his wife was an innocent victim of broad daylight gangwar, he decides to utilize his military war techniques to destroy the city mafia, becoming second "Paandav".

Vijay's playboy friend A jay (Prithvi), unaware of mafia's bloody violence and unconcerned about the pain of mafia's victims, who was busy teaching Ritu....?  (Nandini Singh) how to make Vijay fall in love with her, is dragged into bloodsucking reality of crime and violence by Ritu, making him witness that his friend Vijay is getting trapped while fighting against two mafias. Ajay joins Vijay's war waged against two deadly armies of Kauravas, as third Paanday.

When Ashvin Kumar (Mukesh Khanna), Vijay's elder brother is transfered to city by his father-in-law. honest Commisioner of Police Srivastav (Sudhir Pandey) to fight against city's crime rest of Paandav's thought that he'll be the fifth Paanday. But they were shocked to realize that Ashvin Kumar instead is bought over by K.K.'s mafia and K.K.'s strength multiplies.

Now rest of four Pandav's start loosing their battle against city mafia. Commisioner Srivastav is brutally murdered. Vijay's bhabhi (Manjeet Kullar) is raped and killed brutally to such an extent that even Vijay's innocent niece is slaughtered.

What happens to the Paandav's ? Who wins the war on Kaliyug's Kurukshetra —these dangerous Kaurays or those already loosing Paandav's ? these questions are answered in the film "Paandav" 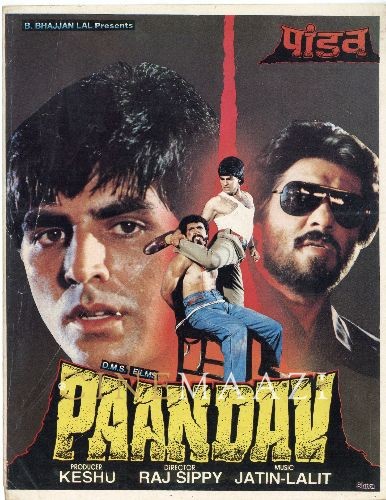