When the social service done by the so called social workers take the form of vandalism,, having far reaching criminal effects, then spirit of rebellion takes birth in the hearts of the sufferers and they rise to punish the wrong-doers in the best way they deem fit. This, in short, is the story of the film "Pap Ki Sazza".

Brahmdatt, the so called social worker was considered to be a God in the small town. He was involved in all the social, political and educational activities of the town. He, along with Jwala, a goonda, and Ijjatram, a factory owner make life miserable for everyone. Siva, a small man, vows, to put an end to this tyranny.

Siva works in Ijjatram's factory as a mistry. He is an honest and hardworking man. Siva has a crippled sister and no one else in the family, and he' shovers all his love on his beloved sister, Radha. She studies in the junior college, and has a first class career. Her teacher Mahananda, loves her tremendously for being an intelligent and decent girl.

Mahananda comes in contact with Siva through Radha and both fall in love in due course.

Mangla, a girl of questionable character studies in the same college and is very jealous of Radha as Radha steals all the limelight in the college. Mangla decides to spoil Radha's name and befriends Brahmdatta through his crony Sevakram.

Brahmdatta calls Siva to the office of the social welfare committee and tells him fabricated stories of his sister Radha's misdeeds, which infuriates Siva. He does not believe these stories and insults Brahmdatta, making him burn with anger. Brahmdatta decides to take revenge and kill Siva.

Brahmdatta, along with Sevakram and Jwala let loose a reign of terror. They murder Radha and Mahananda's younger sister Pinky after making them victims of their sexual, lust.

Siva and Mahananda decide to put an end to this tyranny and to punish these criminals suitably. To achieve this aim what plan they adopt? What actions they take? To find the answers to these questions you see the film "Pap Ki Sazza". 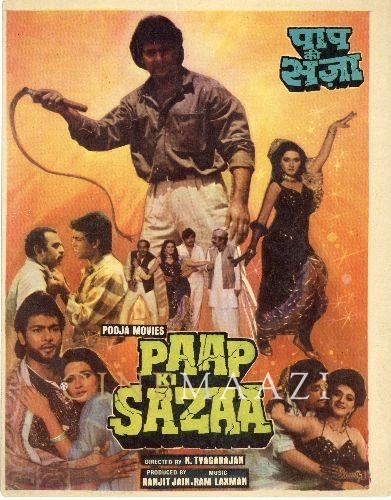