It is the story of a fortunate girl Padmini (Sadhna Singh), who was brought up like a Princess, ever since her childhood... Right on her wedding day, misfortune made her an orphan. Her wideo mother took Padmini and her younger brother Prakash (Master Sanjay) to Bombay to stay with her friend Shobha (NanditaThakur). Shobha sells Padmini to a play-boy Lucky Ram (villain Surendra Pal). Padmini escapes and in the process is hit by a car driven by Ramesh (hero Sushant Ray) and she becomes unconscious.

Ramesh takes her to a hospital. On Padmini's statement Inspector Chandrakant (Mu neesh Dutt) arrests Shobha and her professional call-girls. Padmini seeks shelter in an 'Ashram'. Ramesh who had fallen in love with Padmini, meets her by chance in a temple, but Padmini who tends to hate every and any man, rebukes his love. But this does not deter Ramesh, and he helps Padmini at all times, but yet is unable to remove the hatred for men, from her heart.

Lucky Ram as a revenge, gets the 'Ashram' looted and gets both the legs of Prakash broken. The mother dies with this shock, Disabled brother and harassed sister are unable to arrange money to spend for the last rites of her mother's death. Padmini gathers wood from the tress and prepares the pyre for her mother while her brother lights the flame.

There comes a time when Padmini gets refuge in Ramesh's house. But misfortune not let her stay there too, and later there comes a stage when she kills Harish Chandra (Shivraj) and Lucky Ram. Imspector Shashiraj is killed during the investigations. Padmini is arrested and a case is filed against her. During the case proceedings, Ramesh being the Public Prosecutor, sacrifices his love for duty, and tries his level best to get Padmini sentenced to death. On the other hand, Ramesh's mother (Urmilla Bhatt) becomes her defence lawyer, who keeps no stone unturned to prove Padmini innect.

Who wins? The mother or the son? What is Padmini's fate on musdering two persons? What is the result of Ramesh sacrificing his love for Law? Was the murderer of Inspector Shashi Raj arrested? The person who made Padmini an orphan.

What end did he meet? 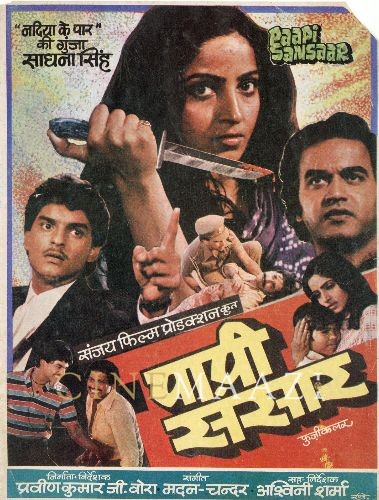