Parthiban (S.A. Ashokan), the Chola king of Uraiyur, yearns to break away from the yoke of the Pallava Narasimha Varman or Mamallar (S.V. Ranga Rao)  and re-establish the glorious Chola Empire. He refuses to pay tax and instead wages a war with them. His brother and Army General Marappa Bhoopathy or  Bhoopathy (T.S. Balaiah) expresses his displeasure in going to war. So, Parthiban takes over as Army General. On the eve of the war, Parthiban shares his dream of his son Vikraman ruling the kingdom independently to his wife Arul Mozhi  (K. Malathi) He also gives his ancestor’s sword which is to be given to Vikraman when he is ready to establish a free kingdom. He gives his son to Ponnan (S.V.  Subbiah), a boatman and a close confidante, to carry forward his mission.

In the war, Parthiban fights courageously but gets injured badly. Before dying, he confides his dream to a Sage (Mamallar in a disguise), who comes there, and the  Sage promises to make his son Vikraman an independent ruler. The Sage also reveals himself as Mamallar to the dying Parthiban, surprising him.  The Sage visits Parthiban’s kingdom and talks about Parthiban’s valour in the war and his last wish to the Queen and takes Vikraman with him. Years pass by and  Vikraman (Gemini Ganesan) grows under the guidance of Sage as a strong and courageous warrior. Bhoopathy, in order to ascend the Chola throne, plans to get rid of Vikraman. He instigates him to fight the Pallavas and re-establish the Chola kingdom. Unaware that the Sage is the  Mamallar, who brought him up, Vikraman and  Ponnan along with a  small army go to hoist the Chola flag in the  Chola territory, get into a war with the Pallava army, and get defeated.

Vikraman is arrested and brought to the  Pallava capital Kanchi. On route, he sees Kunthavi  (Vyjayanthimala),  daughter of Mamallar, and gets attracted to her. She also likes him instantly.  Vikraman is given the offer to be the King of Uraiyur (Chola Empire) provided he pays the taxes. But Vikraman refuses and is banished to an island, on a condition of the death penalty if he tries to escape from there.  Vikraman is given a royal welcome at the island.

The people, descendants of Cholas, actually had sought the assistance of the Mamallar to get a good ruler for them and Vikraman was the King’s natural choice. Vikraman rules the island for a few years. As he cannot resist his desire to see his mother and motherland, he travels back to Uraiyur, in the guise of a diamond merchant Devasenar.  On his way, Vikraman is waylaid by the followers of Kapala  Bhairavan (P.S. Veerappa), brother of Pulikesi II, defeated and killed by Mamallar years ago. Vikraman is rescued by Mamallar incognito as Veerasenan and at nightfall while resting, Mamallar shares his past: his love for a dancer  Sivagami (Kamala Lakshman) and explains how after losing the war with him, Pulikesi created havoc in the country and  Sivagami swearing revenge (hence was called Sivagamiyin  Sapatham). Mamallar destroys Pulikesi’s kingdom to fulfill her vow. He gives Vikraman his horse for his further journey to Uraiyur.

Vikraman, while travelling falls into a turbulent river and is rescued by Ponnan. They see Kapala Bhairavan and  Bhoopathy conspire against him and Mamallar. Ponnan retrieves King Parthiban’s sword and the ‘Thirukkural’  written by Thiruvalluvar and hands it over to Vikraman.  Kundhavi arrives and they both express their love for each other. Bhoopathy, the Army General of the Chola kingdom,  heeding to Prince Mahendran’s orders arrests Vikraman.  However, Bhoopathy who is in league with Bhairavan  tells him to abduct Vikraman on the way to Kanchi. But  Ponnan helps Vikraman escape and leads him to the place where his mother is kept. Vikraman meets his mother and learns from her that the Sage who brought him up had been captured.

Vikraman rushes to rescue the Sage.  Kapala Bhairavan tells him that if he knew the true identity of the Sage, he wouldn’t be so anxious to rescue him and before he could go any further, Siruthondar (Javert Seetharaman), who was earlier the Army General comes with Pallava forces and releases the Sage. Siruthondar also exposes Kapala Bhairavan as Neelakesi, brother of Pulikesi.  While Bhoopathy kills Neelakesi for trying to sabotage the country, he gets killed by Neelakesi’s assistant.

Vikraman is taken to the Pallava King’s court for trial, for escaping from the island. In the court, Mamallar sits as  Sage along with Siruthondar. Siruthondar talks about the greatness of Mamallar and how he went about honoring the promise to Parthiban. He then tells the Sage to reveal his identity. The Sage removes his false beard to reveal himself as Narasimha Varman or Mamallar to everyone’s surprise. Narasimha Varman, instead of punishing, makes  Vikraman the independent King of the Cholas and also offers his daughter in marriage to him, to fulfill his commitment to Parthiban.

The film is based on a novel by Kalki who was known for historical fiction on the model of Walter Scott's novels.

Though some of the film's characters like Narasimhavarman I and Siruthondar are historically authentic, it comes through as a mere fictional story. The ethos of Tamil revivalism is wrongly projected back in time, and come across as an anachronism. For instance, Narasimhavarman talks about reuniting the kingdoms of the Tamil region under one flag; he cites the Ashokan and Gupta empires as models fit for emulation; the costumes are not at all authentic; Marapaboopathi, the Chola commandant, sports a nineteenth-century Maharashtrian turban; scenes of the royal court are stagy and unconvincing.

The only Pallava monuments featured in the film are the Mamallapuram monoliths, though there are many others not far from Chennai. Other than this, most of the shots are indoors, on sets with painted backdrops: the impact of a well-made historical is hardly achieved. An abridged version of Sivakamiyin Sabatham (The Vow of Sivakami), another novel by Kalki, was incorporated, as a dance drama, in a contrived manner; a tedious intrusion.

The soundtrack was continuously filled with jarring background music. What could have been a worthwhile visual experience was instead reduced to a film in which much of the story was narrated verbally. The script was expository; for instance, Hiuen Tsang's historic visit to Kanchipuram was merely mentioned.

The film was however awarded a silver medal by the Government of India. 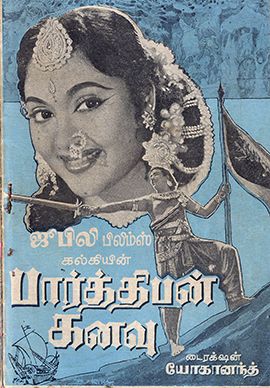