Science after gigantic progress and power over nature, has paused to think, what it has achieved an what those achievements stand for. The world is bewildered at the uncontrollable possibilities of destruction the humanity shall have to face one day or the other; although the human mind has cherished faith and devotion since ages and ages modernism has given a rude shock to all charitable viewpoints of life and hence mind has to search for peace in various directions, in utter blankness while the richest treasure of tranquility and eternal joy rests within itself.

Gumanchandji had millions at his command and the consciousness of this possession had given him an attitude of life which very nearly bordered on atheism. He had a young daughter and a younger son who after their mother's death was very fondly taken care of by the sister. The children of course inherited the faith and devotion of their mother but Gumanchand had his own vies about men and things; and our drama begins with a clash of ideals between the millionaire and Indulal the tutor of the boy. Neither's disapproval nor supplications both from his daughter and the son prevailed upon the egoism of the father who wanted to see how Indulal's God helps when Gumanchandji wishes to harass him.

But fate chose otherwise and Gumanchandji lost all he had, while Indulal lost faith in his creator. He was tried and found wanting while, Kusum and little Dhiru struggled against all odds bearing the torch of faith in their hands.

Circumstances sent Gumanchandji to jail for criminal offence while Kusum searched in vain for a job to save her brother from dying of consumption. Forlorn and unfriended she was driven at last to desperation. At any cost she determined to save her little brother but the cost was too great to be paid and she did try to pay but God saved her from humiliation, but meanwhile the patient had gone away to the world unknown. She got money for medicine. One young man Mr. Rasiklal who had no love lost for Kusum's God, got himself interested in the girl, after a strange and unusual introduction. A ray of hope dawned in the darkness hours of trial and the care and sympathies of Rasiklal again made her life worth living.

But the happiness was not to last long. Rasiklal was betrothed to one girl Padma who wanted to marry him for his millions. She in her heart of hearts loved Mr. Pyaralal and intimate of Rasik. Thus Rasik who cleverly managed to pose as the manager of his own estate before Kusum was entangled more and more in his game. Kusum came to know about the whole affair while all of a sudden Gumanchand appeared in the garden. Kusum ran wildly to meet him when the old man averted the recognition thinking that it would break the happiness of the couple. Kusum tried to catch him but it was all in vain. In utter disgust she left Rasik's bungalow and ultimately joined the stage.

Rasik who had by Kusum's good influence given up drinking again reverted to all his old habits, while Padma and Pyaralal had their own purpose to serve in keeping Rasik an easy prey to his weakness. Padma once took him to see the drama when she came to know that well-known actress Champa was none else but Rasik's beloved Kusum. Rasik got wild when he saw her on the stage and openly said worst things from the auditorium. He left the stage contemptuously, this gave a rude shock to Kusum.

Indulal who had planned very skillfully the ruin of Gumanchand in moments of desperation realized through sheer force of circumstances that men commit grievous wrongs yet God has not forsaken them. He tried to mend the things but it was too late.

Gumanchand while wandering in the street saw a poster with Kusum's photograph posted on the wall. He tried to rush into the theatre but nobody allowed him to do so, when fire broke out all of a sudden and Gumanchand rushed to save Kusum, but he had an attack of paralysis while he was in jail.

He had not the strength to lift his own daughter to save her from the fire. He wanted to pray but he could not fold both his hands together. He prayed from the heart of his hearts to give him sufficient strength and erstwhile atheist pronounced his creator's name with all the devotion he could command and God gave him enough strength to lift his daughter. She was fortunately saved.

But unluckily she lost her eyesight and she had to undergo terrible ordeal when Padma came to persuade her to forget Rasik and make her proposed marriage with Rasik, happy.

Indulal intervened and Rasik and Kusum met once again. She kept her promise to Padma. But when Rasik realized that she was pretending that she had normal eye sight he visualized the depth of the magnanimity in her heart and thus dawn of happiness again spread its radiant rays over God's Beloved. 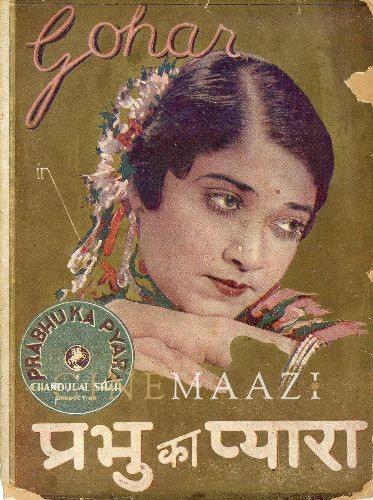 Typist Girl (Why I Become a Christian)