Rajesh, a handsome young boy was the son of an honest Police officer Dinesh Chandra. Since his childhood he was fond of painting and his parent wanted him to be a great artist.

But on a Diwali Night, when Rajesh was playing with fire-work, along with his younger brother Rakesh and sister Munni, a dangerous dacoit, Jwala entered on a horse with a personal grudge, killed his father Inspector Dinesh and his mother brutally. Rajesh saw him and chased to catch him. Younger brother Rakesh and Munni followed and went far away. They got separated, while searching each other.

Rajesh met a god's man colonel Taneja, who brought him up like his own son. He knew his story of agony and tried to change his mind but failed. Rajesh kept on making sketches of Jwala since the very day, Taneja found him in a ravine

And grown-up Rajesh came to know that Dacoit Jwala has shifted his camp from Chambal Valley to a big city and became an underworld Don. So he joined another notorious Smuggler Vikrana to reach him.
And in a very short span, he turned into a notorious criminal as Rajoo Dada. His brother Rakesh, a Police officer tried to nab him several times, finding him involving in crimes.

One day Raju took shelter at his sister's place who had become a dancing girl, due to circumstances. Rakesh also arrived there, but they could not recognise each other despite of being together.

And fate took a crucial turn, when Rakesh came to know that Raju is his long lost brother and dancing girl, his beloved sister Munni. He could not reveal the truth because he was a law-man and his brother an out-law, a smuggler and murderer.

And Rajoo, unaware of the chain of relationship, was placing ahead in search of Jwala, with a fire of vengeance. Finally Rajoo encountered with Jwala. There was a turmoil of hatred and vengeance, Rajoo wanted to kill him, Inspector Rakesh wanted to arrest him and Jwala played such a trick that neither of them could nab him and he escaped.

And did Raju get Jwala and killed him? Did he unite with his brother and sister?? See it on the silver screen of your favourate theatre. 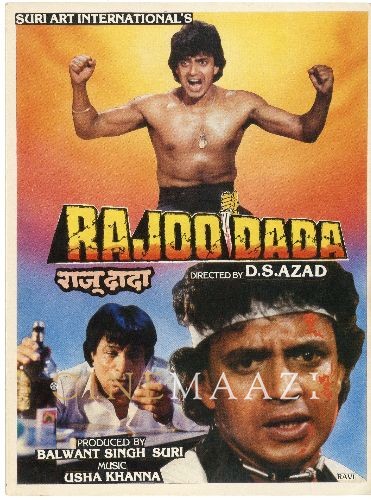