"TRUTH WILL PREVAIL AT LAST"

World's first Poet Valmiki's great Epic "RAMAYAN" has inspired many Poets, Painters, Sculptors and Dramatists to immortalise their art. In any form of fine art Ramayan has its own place. We here depict it in the new form of art-The Motion Picture.

Shri Ram left luxury and comfort of the palaces of Ayodhya to fulfil his father Dasharath's words promised to Kaikeyi. When Ram started for the wilds, Devi Sita followed him as if she were his shadow. Lakshman too accompanied his beloved brother and set to the world the highest example of brotherly love. This story as well as that of Bharat's longing to meet Ram returning from the forest   has been delineated. In our picture "BHARAT MILAP" In "RAM BAAN" from Aranya Kand to Lanka   Kand the story of Ramayan i.e. till the defeat and death of Ravan has been depicted. The other incidents that happened thereafter were already picturized in our film "RAM RAJYA".

Ram, Lakshman and Sita who were in golden palaces, who were resting in the beds so soft as the lotus petals, were now thrown into the thorny woods. After giving his Paduka (wooden sandals) to Bharat, Ram stayed for a few days at Chitrakut and then left for Dandakvan where the holy ascetics were dwelling who were terrorised by the Rakshasas.

Ram took an oath, placing his divine "Ram Baan" presented to him by Brahma on his bow to protect the ascetics from the Rakshasas and to guard Truth and Religion against the evil elements. With this motive he came to Dandakvan and stayed on the bank of Godavari in Panchavati.

Sita's love for silvan beauty adorned Panchavati and heaven was brought on earth. The cuckoos, the peacocks, the parrots and the deer found a true companion in Janaki. The deer perhaps were friendly with her because they loved her who had eyes similar to theirs:

"Mark each scented shrub and creeper bending over lucid wave,

Where the bank with soft caresses Godavari's water level,

Tuneful ducks frequent this margin, the Chakravakas breathe of love,

And the timid deer of jungle brows within the shady grove."

But while in Panchavati the life was among sweet flowers and innocent deer, on the other part of Dandakvan were cast the dark shadows of the Rakshasas who were striving to destroy the divine culture and establish the satanic rule of their lord Ravan. Ravan, the scholar of all the Shastras and Vedas and devotee of Lord Shiv, had   written his own Bhashya on Vedas. He wanted to root out those who were practising spiritual ideals of Vedas because he wanted his own materialistic Interpretation of Vedas to be practised by all. At the time of his sister Shurpankha's swayamvar when he was boasting of his might, there came one of his Rakshasas from Dandakvan saying that Ram's mighty "Ram Baan" was stronger than the burning fire. He also said about the solemn oath of Ram. While Ravan laughed at this, Shurpankha ran to Panchavati with a view to finding a brave and unconquerable man to be her husband. And whatever happened there became the cause of the war between Ram and Ravan. It was Lakshman's act of cutting the nose of Shurpankha who was mad with the intoxication of the pride of her beauty.

Ravan became furiously angry seeing his sister's face spotted with blood. His pride urged him to take revenge and he was led to come against the chastity of Sita. He cunningly managed to have Ram and Laksh man away from Parnakuti and carried Sin away from Panchavati to Lanka.  Ram wandering in the wild forests asking the birds, the creepers and the river Godavari about the whereabouts of Sita, came to Shabari Ashram. Here he came to know of Sita's fate. Even after hearing this sad news, he fulfilled his promise to the poor Shabari and accepted her humble hospitality, for to him Duty was greater than Sentiment. At Rishyamuk Mountain he met Sugriv and sent Hanuman to Lanka in search of Sita.

After this followed incidents of Hanuman's flight over the sea... The Great Fire in Lanka. Shri Ram's Setu Bandhan. The Inauguration of Rameshwar... Vibhishan's coming to Ram. Peace Mission of Angad. The Beginning of War, Lakshman's Valour. lndrajit's death etc. etc.. that are well known to every Indian.

Then came the final duel between Ram and Ravan and:

Weapon which the Saint Agastya had unto the hero given, Winged as lightening dart of Indra, fatal as the bolt of heaven, Wrapped in smoke and flaming flash, speeding from the circled bow, Pierced  the iron heart of Ravan, laid the lifeless hero low"

At last "Ram Baan" killed mighty Ravan. This war between morality and immorality and divine and evil was not a mere happening but it gave to the world the message that "TRUTH WILL PREVAIL AT LAST" and all the evil forces have ultimately to accept defeat when  they  come against Truth.

After picturising this story "Prakash" have finished the series of events of Ramayan from Ayodhya Kand to Uttar Kand and are proud to present these to the world.

"BOW U NTO THE MIGHTY MONARCH, BOW TO RAMA FAIR AND TALL, HE IS FATHER OF HIS SUBJECTS, HE IS LORD OF CREATURES ALL..." 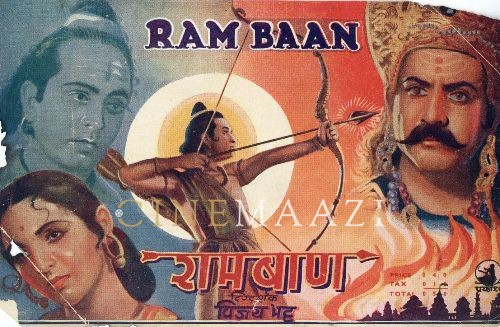