Short, grey haired, kind-visaged Vijayshankar J. Bhatt, fondly called Vijubhai in the industry, looked like a retired barrister. He carried himself gracefully and talked softly like a purling brook, at times so softly as to be inaudible. There was about him an air of calm and contentment, and by his looks he didn’t seem capable of getting ruffled or agitated. Bhatt ranks among the patriarchs of the Indian film industry, was the man behind what is one of the oldest film banners - Prakash Pictures.

Bhatt was born on 12 May, 1907 at Palitana, Saurashtra in Gujarat where his father was a railway guard. He spent most of his childhood with his grandfather, who managed a religious charitable trust. Later, when his father quit the railway job and moved to Bombay to open a cloth shop in Mulji Jetha Market, Vijay joined him to complete his matriculation. After completing his matriculation, Bhatt joined St. Xavier’s College as a science student. Having failed in an examination, he quit the college and took a diploma in electric lighting and traction from an international correspondence school and joined the Bombay Electric Supply & Tramways Co. (BEST) as an apprentice for three years before being appointed as Drawing Office Superintendent there.

He was fascinated by theatre from the very beginning. The Superintendent position could not thus, hold him for more than two months. He quit and started writing stories and plays. He wrote two dramas for professional Gujarati stage. One of his plays, Lakho Pulani, which ran for one year, fetched him four hundred rupees. Soon he turned to cinema and started knocking at the doors of studios, which didn’t open easily for strangers. He was once turned away from a studio in Chowpatty by a watchman named Umer Lala. Years later, Bhatt was to employ the same man to keep a watch at his Prakash Studios gates. Eventually, he wrote six stories for silent films. Among the people who bought his stories were, A. Hussain, the proprietor of Royal Art Studio, whose production manager was Ardeshir Irani, India’s first talkie-maker. Ardeshir Irani also coached him in writing a screenplay. He wrote his first screenplay Vidhika Vidhan which was filmed by K P Bhave. Ardeshir Irani made two films scripted by Vijay Bhatt and his brother Shankarbhai Bhatt – Pani Mein Aag and Ghulam (1929).

Soon after, Bhatt founded the Royal Film Company in partnership with a cousin. Their first film (a silent film) was Black Ghost (1930) starring Master Vithal and Madhuri. The 8-9 thousand feet film cost the 8000 rupees.

Bhatt produced seven silent films in total. They also made Alif Laila (1933), their first talkie under the banner of Royal Cinetone.

Later, he founded a distribution concern, Royal Pictures Corporation, which acquired the distribution rights of Sohni Mahiwal (1928) for North India for 11000 rupees – a sensationally huge sum at that time.
He established Prakash Pictures in 1933 along with his brother, Shankarbhai Bhatt.

In the same year, he wrote and produced Sansar Leela (1933), a family social drama, which was a big hit. He then made a two-reeler film called Jayman nu Rasjivan (1935) and Snehlata (1936), which also had a Hindi version. Jayant, who played a small role in Sansar Leela, made a lasting impression on Bhatt and went on to become a regular fixture in his films. The brothers went on to make Bombay Mail (1935), Challenge (1936), His Highness (1937), State Express (1938), Bijli and Leatherface /Farzand-e-Watan (1939). Leatherface starred Jairaj, Mehtab and seven years old, Mahjabeen Naaz, who Bhatt named Baby Meena. This child artist went to become the celebrated Meena Kumari. Later, in Station Master (1942), Suraiya was introduced as a singing child star. Poornima (1938) produced and directed by him was a story of the struggle of daughter of a prostitute aspiring for marriage and respectable life. The story was an adaptation of a famous novel of the same name by one of Gujarat’s greatest writer Ramanlal Vasantlal Desai.

In 1937, he became a director with Dreamland (Khwab Ki Duniya) starring Jayant and Sardar Akhtar. The film was inspired by Hollywood’s The Invisible Man. Babubhai Mistry, then a young artist in the painting department of the studio, played a key role in filming the trick scenes using a black thread, which led to him being nicknamed Kaala Dhaaga.

With Narsi Bhagat (1940) in Hindi and Narsi Mehta in Gujarati, began Bhatt’s enduring passion for devotional and mythological themes, a passion responsible for much of his fame and success. From then onwards, he produced and directed a series of outstanding mythological films which also included social themes. The film was based on the life of the great poet saint of Gujarat whose bhajan Vaishnav jan to tene re kahiye je… was one of the favorites of Mahatma Gandhi. In fact, Bhatt stated that the very suggestion to make the film had come from the Gandhiji himself. On a visit to Valsad, Bhatt and his friends went to seek Gandhiji’s darshan. Mahatma asked Bhatt, “What are you doing?” I make films”, said Bhatt. ‘Have you thought about making a film on Narsi Mehta?’ was the only other question Gandhiji asked. ‘I will try to make it Bapuji,’ said Bhatt who got down to working on the script soon after. Bhatt signed Vishnupant Pagnis to essay the role of Narsi Mehta and Durga Khote to play the saint’s wife. The bilingual was very well received throughout India and even celebrated silver jubilee at many places. Bhatt’s only regret was that Gandhiji could not see the film.

His Bharat Milap (1942), made both in Hindi and Marathi (Bharat Bhet), was also a successful silver jubilee hit. In Bombay, the film was premiered by Dr. Radhakrishnan at Majestic Cinema. A busy man, Dr. Radhakrishnan liked the picture so much that he sat through the entire film. At Calcutta, the film premier was inaugurated by Dr. B.C. Roy, then a minister in Bengal cabinet.

Ram Rajya (1943), produced and directed by Bhatt, won him great honours throughout the country. The Hindi-Marathi bilingual was eulogized as the great torch bearer of the country’s glorious past and cultural heritage. The picture ran for 100 weeks in one theatre alone in Bombay and 50 weeks at various theatres elsewhere. The film was shown to Mahatma Gandhi in 1945 when he was convalescing at Juhu. Although Bapu’s secretary Shushila Nayar had assigned only forty minutes for him to watch the film (it being a ‘moun’ day for him), Gandhi ji saw the picture for over ninety minutes, uninterrupted. It is widely believed that this was the only film Mahatma Gandhi ever watched in his life time. A special committee of citizens was formed under the chairmanship of Pranlal Devakaran Nanji to felicitate the film’s unit. A viewing of the film was arranged in United States. A Scroll of Honour was presented to Bhatt by Skurus, the president of 20th Century Fox at Waldorf Astoria Hotel, New York in an event organised by the Indian Society of America whose chairman was Dr. Chandra Sekhar. The function was presided by Eric Johnson, the then President of Motion Picture Association of America.

Vijay Bhatt then went on to produce and direct a grand historical Vikramaditya (1945) at the insistence of the Vikram Bimillenium Committee, which wanted the film to be a part of the celebration of the 2000 years of the Vikram era. Bhatt avoided mythifying the King and based his film on facts. Prithviraj Kapoor played the title role.

Bhatt once said that the reason for the success of his mythical films lies in a “rational human approach” to the tales of Hindu saints and deities. Rather than stressing on miracles and superhuman aspects, he attempted to portray the gods as noble human beings who adhered to great ideals in their lives and became godly by their deeds.

Jeevan was introduced by Bhatt as Narad Muni in Bhakta Dhruv (1947). He is the man who gave the break to such well-known names of the Indian screen (some of them, indeed, better known today than his own) as A.R. Kardar, Jayant, Kanu Desai, music directors Naushad and S.N. Tripathi, and Ameeta.

In 1947, he visited America for 3 months. He saw numerous studios at work and attended the premiere of Ram Rajya. He also wanted to explore the possibilities of co-production of a film based on the life of Buddha. The script of Buddha was written in English by Harindranath Chattopadhyay. He also carried with him the prints of Bharat Milap and Vikramaditya for private screenings. Cecil B. DeMille presented Bhatt an autographed picture with a note, “From one director who made good films, to another director who will be making good ones long after I am gone.”

Later, he shifted to films with themes having social overtones like Samaj Ko Badal Dalo (1947), a commentary on incompatible marriages, Shri Chaitanya Mahaprabhu (1954), Patrani (1956), Goonj Uthi Shehnai (1959) in which Ustad Bismillah Khan played the background score, Hariyali Aur Raasta (1962) and Himalay Ki Godmein (1965), written by Bhatt’s son Arun Bhatt, presented the story of a dedicated doctor who served an adivasi area and established a hospital there.

He produced and directed the superhit Baiju Bawra (1952) in which he employed the services of great classical singers, Ustad Amir Ali Khan and D.V. Paluskar, the son of famous Vishnu Digambar. The film’s success was a major milestone in Naushad’s career. The film was hailed as representative of India’s musical heritage and was the official entry in the first Indian Film Festival in Russia, 1954. The then USSR Government purchased this film. The film earned Meena Kuamri her first Filmfare Award for Best Actress.

He also directed a children’s film called Bapu Ne Kaha Tha (1959) which dealt with childhood of Gandhiji and how he adhered to truth. The narration of the film was done by Morarji Desai, who also appeared in the film.

Vijay Bhatt passed away on 17 October, 1993, leaving behind an immense legacy in the history of Indian cinema. 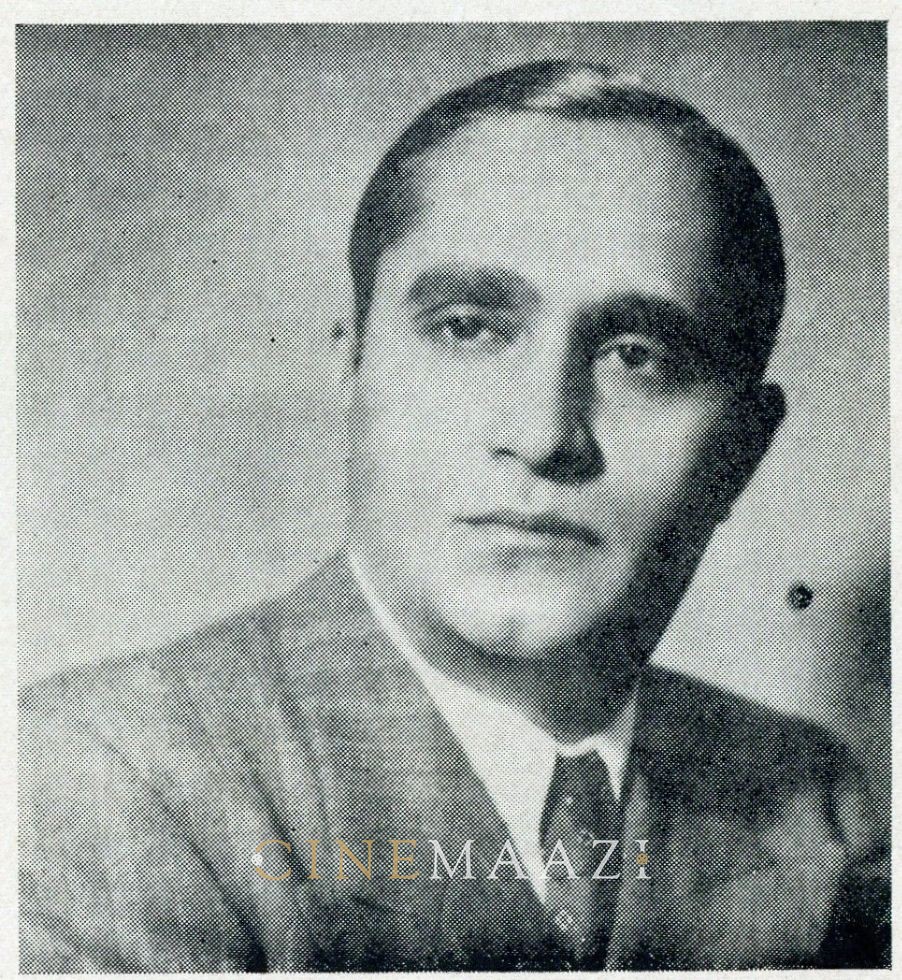