Selvam (MGR), a rickshaw puller sees Manickam being killed by Kailasam (S.A. Ashokan), known for his illegal activities. His brother-in-law, Dharmaraj (Major Sunderrajan), an advocate also witnesses the ghastly killing but leaves the place silently. Selvam demands justice from Dharmaraj who states that it is his duty to protect his client Kailasam.

Time passes and Dharmaraj becomes a Judge. At a college festival, while distributing prizes, Kailasam, the College President sets his eyes on the gorgeous Uma (Manjula), a student and decides to sell her to his overseas clients. He orders Mannar (S.V.Ramadas) to kidnap Uma. Uma secretly goes to meet her mother Parvathi (Padmini) in Selvam's rickshaw and Mannar tries to kidnap her. Selvam fights with them and saves Uma and Parvathi helps her escape. Mannar files a Police complaint and Selvam is arrested. During the trial, Parvathi's silence leads to Selvam being convicted. Dharmaraj pays the fine and bails out Selvam but Selvam immediately repays and refuses favors from Dharmaraj.

Seeing the harassment Parvathi faces, Selvam invites her to live in his house. While shifting he sees an old photograph of Parvathi with his sister Kamalam (G. Shakuntala). Since he had studied and worked abroad, Selvam had lost touch with his family.

Mannar and his men try to kidnap Uma again and she escapes in Selvam's rickshaw. She doubts that Selvam belongs to the same gang and goes into Dharmaraj's house. Dharmaraj explains to Uma that Selvam was convicted because of her absence as a witness and also that he is educated and has taken up this job for a living. Hearing his good deeds, Uma falls in love with Selvam.

Selvam moves the Court on Manickam's murder case and Kailasam demands Dharmaraj to support him, which he rejects. Kailasam threatens to expose Dharmaraj. Kailasam gets to know that Parvathi and Uma meet secretly and threatens to expose them. Kailasam's goon takes a picture of Uma and Selvam, and Kailasam uses it in College to tarnish Uma's character. When the management demands an explanation, she says that she is not an orphan and promises to bring her mother. Uma takes Selvam along with her to bring her mother and Selvam is shocked to know that it is Parvathi.

Parvathi meets Dharmaraj, reveals that Uma is his daughter, and seeks his support and Dharmaraj agrees. When Parvathi comes to the college to declare Uma as her daughter, Kailasam brings Karmegam (R.S. Manohar), Parvathi's husband whose threatening presence silences her again leading to Uma being dismissed from college.

Karmegam tries to kill his wife Parvathi doubting her chastity as she had a baby when he was away serving a jail term and Selvam saves her. Parvathi reveals the facts. Uma is actually the daughter of her friend Kamalam - Dharmaraj's wife and Selvam's sister. Kailasam, who was keen to get his sister married to Dharmaraj, alleged Kamalam of adultery and made Dharmaraj poison her slowly. Kamalam gave the child to Parvathi and requested her to bring up the child as her own. Karmegam who returns from jail sees the newborn baby and doubts Parvathi's character and tries to kill Uma. Thus Uma had threats from both Dharmaraj and Karmegam and she had to bring up Uma secretly. Dharmaraj, out of guilt confesses Kamalam's murder to the Chief Justice.

Dharmaraj confesses to Selvam and when Selvam tries to take revenge on him, Uma shoots Dharmaraj and escapes. Selvam catches her and observes a change in her behavior. Dharmaraj apologizes for his mistakes to Selvam and dies. Police arrest Uma, and Selvam works out a plan with the Police and she is administered an injection which prevents her from speaking. Uma is kidnapped from the hospital by Kailasam's men and Selvam disguised as a driver follows them. Selvam and the Police find out the illegal activities carried out by Kailasam and the Police arrest everyone.

Kailasam shoots and kills Uma and when he expresses his satisfaction, Selvam reveals that the girl who he killed is Mary disguised as Uma who was sent by Kailasam to kill Dharmaraj. Selvam, who found out this secret had given an injection to stop her from speaking and used her as a body double. Kailasam is sent to jail. Uma marries Selvam with the blessings of Parvathi and Karmegam. 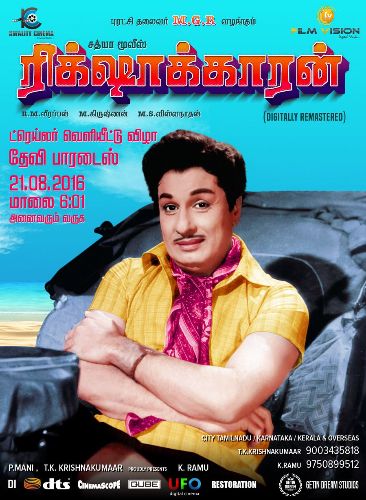