We are having more confidence in Hindu Dharmashastras. Mostly, we believe and follow. Particularly in our Country, most of the womenfolk are following Grahasth - Sati - Dharm, Pooja Vrita of devoted women, whose names ever stand in the History of Dharm-Puranas as Mahasati Pativritas.

Accordingly, Atri Muni's wife Anusuya was one of Mahapativritas. By undaunted worship of her husband, she attained more spiritual powers than Goddesses. Once Saraswati, Lakshmi and Parvati have failed to relieve Ganga Devi from her sins of human Narad takes Ganga Devi to Sati Anusuya and requests her to get relieve from the sins. Anusuya from her Pativrita power relieves Ganga. Seeting this, all the three Devis get angry with shame and plan to degrade Anusuya to keep their position in fact on the earth. They start troubling Anusuya to misguide her from her Vritas. But, Anusuya patiently faces all the troubles.

Narmada, an unlucky girl comes to Anusuya and requests her to send her to Swarglok along with her Human body. Anusuya tries with her power and makes Narmada to go to Swarglok. Narmada was refused to enter Swarglok with human body. Hence, Narmada comes back to Anusuya with a request to fulfill her ambition in some other way to get Swarglok with her human-body.

Anusuya advises Narmada to do Patiseva vrita to attain Swarglok, by marrying anyone that she comes across on the Sun-rise of the next day. When Narmada goes out to do so, three goddesses, take advantage of the situation and make her to see a blind hunchback ugly man who was suffering from illness. Narmada marries him in accordance with the advices of Anusuya and serves her husband patiently.

Narmada's friends insult her husband Koushik. Koushik wants to go away to a lonely place. Narmada takes him to Himalaya, where he was cursed by Mandvya Muni, by which Koushik expects death at the time of Sunrise. Narmada requests Mandvya Muni but he refuses to excuse Koushik. Narmada takes challenge with the Muni and stops Sunrise.

At the same time three Devis plan to destroy Anusuya's Patiseva Vrita by sending three Murtys (Tri Murti - Brahma, Vishnu, Mahesh) to Anusuya. Three Gods come to earth as Sanyasis and Anusuya provdes them food, but they refuse to eat. They want that Anusuya should feed them without dress in nakedness. Anusuya is shocked and confused by Sanyasis' request.

Did Narmada save Koushik?

Did three Devis keep their position on earth?

See Sati Anusuya on the silver screen for the salvation. 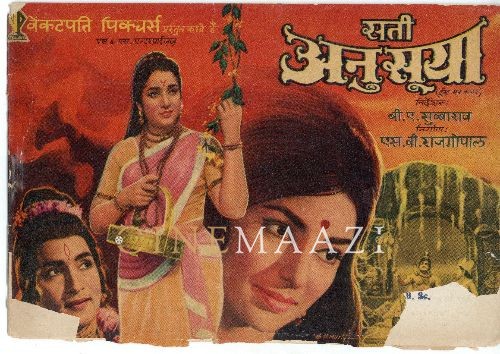