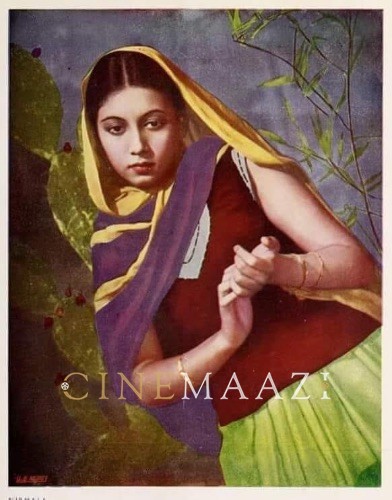 Popularly known as the mother of the 90s superstar Govinda, Nirmala Devi was an accomplished singer, and actor of Hindi cinema.

Born on 7 June, 1927 in Benaras, her father Vasudev Pratap Singh was a well to do jeweller in town. She was trained in Hindustani classical and belonged to the Patiala gharana. She learnt from the maestro Ustad Atta Khan. A multilinguist, she was fluent in speaking and writing in Hindi, English and Urdu. At an early age of 15, she moved to Bombay where K B Lal introduced her to the film world. She worked at Bombay Cinetone Limited for remuneration of Rs 400 per month, until she started freelancing from 1944.

In 1942, she tied the knot with actor Arun Ahuja. The couple met on the set of V C Desai’s 1942 film Savera. Costarring alongside Shobhana Samarth, her performance was appreciated in the film. Some of her other noteworthy performances are seen in Kanoon (1943), Chalis Karod (1946), Anmol Ratan (1950), Chakkaram (1968), and Sati Anusuya (1974). She was seen acting opposite Motilal, Ulhas, and Bharat Bhooshan. She acknowledges her success in the film industry to D N Madhok's contribution to her career, as he often guided her throughout her journey. She looked up to Shanta Apte and was close with veteran actress Suraiya.

Arun Ahuja’s venture into producing a film was catastrophic for the family as they lost all their resources and soon moved into a chawl in Virar. Nirmala Devi started performing in radio and Doordarshan amongst several concerts across the country to support her family’s needs. A powerful performer with a glorious voice, she was known for her thumri, dadra and kajri performances. She has sung several bhajans such as Bhaktanake hitakari hari tum and had released ghazals such as Banaa banaa ke tamanaa and Gham ki nishani. However, it was in the genre of Thumris that she was the reigning queen with several albums released such as Saavan Beeta Jaye which was in collaboration with Laxmi Shankar, Thumriya, and Laakhon Ke Bol Sahe. She also did some playback singing for Savera, Kanoon, Shama Parwana (1954), Bawarchi (1972), and Ram Teri Ganga Maili (1985).

She was the mother of 5 children - Kirti Kumar, Pushpa Ahuja Anand, Kamini Khanna, Padma Sharma and Govinda. Kirti Kumar is an actor, producer, director and singer along with Kamini Khanna who is a music director, singer and writer. Govinda, the son who was born and raised in the chawl grew up to be a superstar of Hindi cinema in the 1990s. Nirmala Devi was a religious person and devoted her time and energy to music.