The King of Gandharvas holds "Swar Pariksha" of his beautiful daughter Madalsa. Amidst the utter darkness Madalsa sings and with power of her music, she lights all the lamps.

The Gods are dazzled by her ravishing beauty and each one of them tries to impress on her that he is the most powerful and great amongst all.

At this time, Narad intercepts and indirectly hints that demon Patalketu, who had a boon of Lord Shiva that none amongst the Gods can conquer him, was the mightiest of them all. But whoever wins the hand of Madalsa in marriage will kill Patalketu.

On hearing this all the Gods make approach to Madalsa for her hand and tired of these approaches, Madalsa decides to go on earth. On earth, she finds a withered jungle. She sings and Lo, the power of her music turns the withered Jungle into a fine blooming garden.

Just then the prince Ritudhwaj who has come on the hunting mission meets her and they decide to meet again on Basant Panchami day.

Narad pays a visit to Patalketu and shows him the Mystery of his death and also tells him that the King of Gandharvas is holding d "Swayamvar" of Madalsa on Basant Panchami day.

Patalketu kidnaps Madalsa from the Swayamvar Mandap and brings her to Patal. While on the other side, with the aid of Sage Galav, Ritudhwaj gets a heavenly horse from the Gods, accompanied by Narad goes to Patal, marries Madalsa and kills Patalketu.

Patalketu's brother Talketu decides to wreak vengeance for his brother's death, He assumes the form of a Brahmin and goes to Ritudhwaj requesting him to come with him to protect his Yagna. Afterwards, he also manages to send news to Madalsa that Ritudhwaj is killed by Talketu. On hearing this, Madalsa gives up her life and is declared a 'Sati'.

Ritudhwaj who later on comes to know the fact, loses the count of the life and becomes eccentric. The lovers of Ritudhwaj including Gods, cannot bear this sight.

They all pray to Lord Shiva, who is moved by the prayers and Madalsa regains the life. But the prince could not believe that she was his beloved. To test, he puts Payals before Madalsa, who, to convince Ritudhwaj sings and makes the "Payals" dance. Ritudhwaj accepts her as real Madalsa. 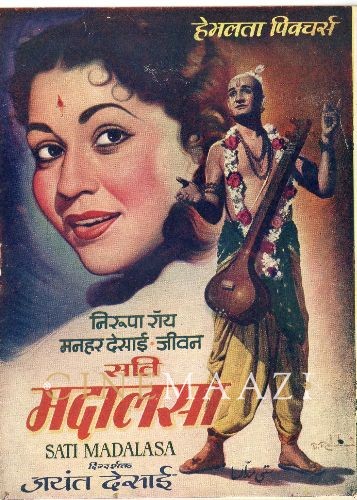