Sathi Leelavathi is a story depicting the Indian woman’s noblest virtue:  Chastity. Krishnamurthy (M.K. Radha), a rich man living with his wife Leelavathi  (M.R. Gnanambal) and a daughter in Madras, is lured into drinking, gambling  and other vices by his friend Ramanathan (T.S. Balaiah) at a mock tea party  arranged for this purpose; Ramanathan’s collaborator is Rangaiah Naidu (M.G.  Ramachandran), an Inspector of Police who misuses the power entrusted to him.  Krishnamurthy is lured by the wiles of Mohanangi (Santhakumari), a woman with  loose morals. Infatuated by her, he promises to pay her Rs. 50,000/-.  Parasuram (P. Nammalvar), a good friend of Krishnamurthy, tries to reform  him but his efforts yield no results. A moneylender who had lent a huge sum  to Krishnamurthy to meet his lavish lifestyle, issues a warrant for the recovery  of his money and Krishnamurthy sinks into a deeper mess. In his drunken state,  he finds fault with his wife and even accuses her of having an illicit relationship  with Parasuram. When Parasuram visits Krishnamurthy to warn him about  the warrant, Leelavathi advises him to leave as Krishnamurthy is not at home.  Absentmindedly, Parasuram leaves his umbrella behind. Krishnamurthy comes  home drunk, notices the umbrella, suspects that his wife is having an affair  with Parasuram, beats her and rushes out with a revolver to shoot Parasuram.  Meanwhile, Ramanathan sends his servant in the guise of Parasuram to steal the  jewels of Ekambareshwarar temple.

Krishnamurthy comes pursuing Parasuram;  a shot is heard and a man lies dead. This  sudden and unexpected calamity brings  the drunken Krishnamurthy to his senses.  Krishnamurthy thinks he has murdered his  friend Parasuram, decides to escape and  leaves his wife and child in the custody of  his faithful servant Govindan. He goes to  Ceylon where he leads a wretched life as a  nameless labourer in a tea estate.  Ramanathan now takes this opportunity  to try to molest Leelavathi who spurns  his illicit advances. Penniless, she goes  with her servant and daughter and leads  a poor but honourable life spinning the  charkha (spinning wheel). Fate favours

Krishnamurthy. During his labour work, he finds a treasure  trove and gives it to his master, his master is pleased with  his honesty and adopts him as his own son.  Years pass; the love for his family draws Krishnamurthy back  to Madras, where the police arrest him for Parasuram’s  murder and take him to court. Detective Sreenivasan’s  (M.V. Mani) investigation reveals the malicious wiles of  Ramanathan and Rangaiah Naidu; he supports this with  evidence by producing the real Parasuram in court as  an old man, who discloses his true self, thus proving  Krishnamurthy’s innocence. Krishnamurthy, acquitted by  the court, unites with his family. Ramanathan is sentenced  to death; Inspector Rangaiah is convicted with 7 years’  rigorous imprisonment. Krishnamurthy’s daughter Lakshmi  marries Chandrakanthan, son of Parasuram.

Sathi Leelavathi was a box office success not only in India,  but also in Ceylon, Malaysia and other countries where  Tamilians lived and worked in plantations, thus creating new  markets for Tamil Cinema.

It was also the first film to have fewer songs. 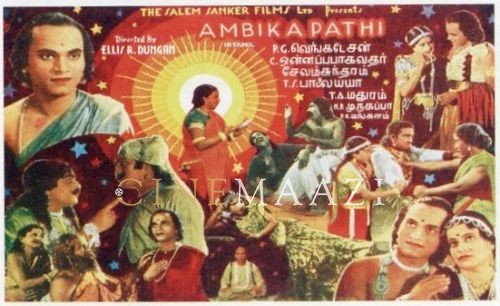