King Chitravarma, an intense devotee of Shiva, had no offspring. After years of penance, he was blessed with a daughter. But the Court Astrologers predicted "Evil dogs her footsteps", "She will be a widow after her marriage, send her away.

" Years rolled by and Simantini grew into a fine maiden. One day when she was out for a stroll with her maids, she saw a hunter lying injured. They took him to the palace and treated him. The hunter was none else but Prince Chitrangad. The Prince recovered. He and Simantini met and cupid had the game.

In royal tradition, the King decided to arrange for her Swayamvar.

Neither the Prince Chitrangad nor anyone turned up at the Swayamvar. Shocked by this, Simantini decided to put an end to her life and leaped into the river.

Resolving thus, she returned to the palace, and Lo a wonder happened. She was informed that the Prince was coming with the offer of marriage. The lovers were wedded.

As luck would have it, on the honey-moon night Chitranged had to leave the palace for the battlefield.

On account of these unfortunate developments, Karkati, the Prince's aunt branded Simantini as "One born with ill-luck" And at that time only, famine spread out; people were dying of starvation.

Karkati accused Simantini for this. She harassed her and said that 'If her God did not pour rain, she would be burnt alive" Simantini prayed and heavens poured rains. While on the other side Prince who was on his way home, drowns in the river which was in spate. But he is saved because of prayer of Simantini and he goes down to Naglok.

But when Takshak, the King of Nagas, learns that Chitrangad is a devotee of Shiv, he sent his Naag Army and gave Chitrangad a flying horse and a jewel (Mani).

Here Chandrasen, the wicked uncle of the Prince, was forcibly taking the hand of Simaniti into his own, but Nagas attack, and Simaniti sneeks out.

Simantini was about to put an end to her life, God Shanker manifests himself, and pointing to the sky tells her "See here is Chitrangad coming."

Simantini and Chitrangad meet and all celebrate Shivratri. 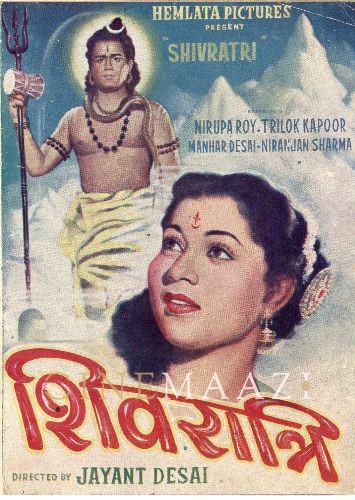