The name of Shravan Kumar was rung in every household for his highest esteem and devotion for his parents. He was born in the holy city of Ayodhya belonging to king Dasharath. With their dedicated worship-Maharshi Shantan and his wife Gyanwati pleased Brahmdev to be blessed with the son named, Shravan Kumar.

Brahma dev had cautioned they must not see the face of their divine son, Being unable to contain their bubbling desire of Seeing their son they made the fatal blunder of not honoring the holy caution and became blind. After becoming blind, the Maharshi Shantan, with the blessings of his divine Knowledge, gave his son. Shravan the greatest borning and Knowledge of life which spirited Shravan Kumar to infuse the Go-Mata bluet out the divine blessings Matri Devo Bhava. Pitri Devo Bhava " and Shravan Kumar was acclaimed as the greatest Scholar of learning by one and all of the learned community.

Being instigated by Devarshi Narad's praise for Shravan Kumar having unstinted devotion for his parents in the mighty court of Bhagwan Vishnu-in presence of all the Devtas Bhagwan Vishnus Maya, became over jealous and She challenged that no power, whether God or saint could overcome the mystic's of Maya and so Shravan Kumar will be disarrayed because of Maya, Shravan Kumar was Married to Vidyavati the daughter of the learned scholar Narmada Shanker, After his Marriage, Shravan Kumar learnt the truth. That he was the root cause of his beloved parents becoming blind and the truth makes Shravan Kumar wildly repentant. Guru Vashisth consoles him that if he could carry his blind Parents on his Shoulders to the 68 Holy Places of the world and wash their eyes with the Holy water perhaps, they could overcome their blindness !! Shravan Kumar agreed to obey Guru Vashisth and decided to go on his Holy Mission with his parents.

Shravan Kumar with his Parents sitting on the either side of the palanquins carried on his shoulders went ahead with his Holy Mission.

Devarshi Narad taking the advantage of the situation-instigated Maya to cast her mystic acts on the way to the Holy Mission causing innumerable sufferings and hardships to Shravan Kumar and Vidyavati not to overcome to their Holy Mission.

At the confluence of Triveni could Shravan Kumar take his bath even defying the barricade of the learned Pundits?

Being banned by the King of Kashi could Shravan Kumar enforce the `darshan' of Lord Vishwanath in person before the aghast General Public?

Could the dumb Pahar Singh get back his word's on his lips at Badrinath?

Could Vidyavati be reunited with her beloved husband along with his parents Seeing her with their eyes again?

And, for all these answers' one must see the greatest Magnum opus musical movie "Shravan Kumar" Produced by Shri Jaya Arts in their nearest favorite theatres. 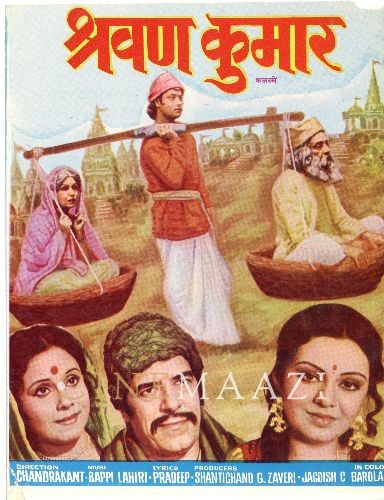 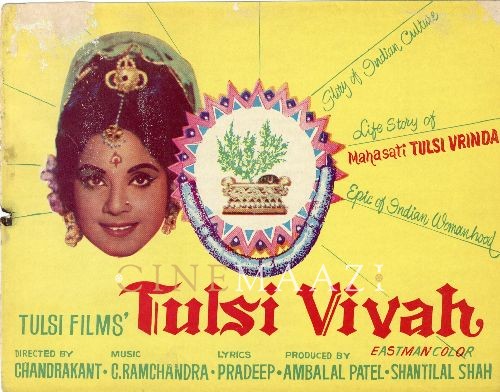