The prime minister Durjan rebels against his king, kills him and captures the throne. He tries even to do away with the young prince but faithful Lakhan gets hold of the prince and disappears.

Twenty years pass. The grown up prince (Mangalsingh) joins a juggler's party along with Lakhansingh and indulges himself in street shows. During the course of his street shows he meets with Roopa, the charming daughter of Durjan and falls in love at first sight.

But neither Durjan nor Lakhan liked this affinity between the prince and Roopa for their own reasons. For Durjan, Mangalsingh was mere a petty juggler and for Lakhan Roopa was the offspring of a venomous snake who wanted to bite the prince by faking love.

Mangalsingh the prince is imprisoned by Durjan and is subjected to ghastly tortures and persecutions.

By accident Lakhan meets Rajmata (Queen mother) who was looking for Lakhan and her lost son for the last 20 years. Lakhan plans to mobilise an army to give defeat to Durjan and dethrone him. But this required money.

Rajmata goes to manage the funds required for the army when on her way she comes across Mangalsingh who had just escaped from the prison and was lying wounded.

A big prize was announced for the arrest of Mangalsingh by Durjan. When Mangalsingh comes to know that Rajmata was in need of money to give battle to Durjan and reinstate the lawful heir on the throne, he offers himself for arrest, so that Rajmata gets the prize.

And thus a mother, in order to save her own son, unwittingly becomes instrumental for throwing the very son to the wolf.

Durjan sentences Mangalsingh to death. When the reality dawns upon Rajmata - her heart cries.

What happens afterwards ? If you want to see with your own eyes the grim struggle between good and bad - between the persons entangled in the golden net (Sunahra Jaal) of love, affection, greed and hatred, then see - "SUNAHRA JAAL". 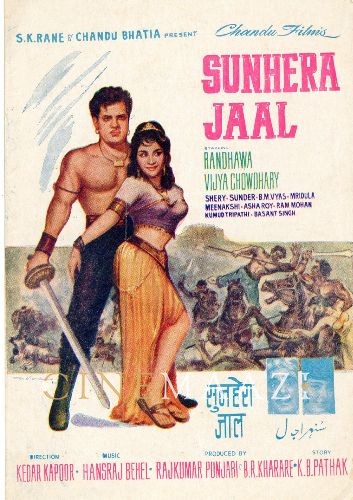