A S A Sami

Muthuvelar (D. Balasubramaniam), a rich merchant of Uraiyur has a golden statue of Goddess Kannagi with two precious gems embedded as two eyes. His daughter SilambuSelvi or Selvi (Padmini) is a fine dancer and while celebrating  Aadi thiruvizha in memory of Goddess Kannagi, Selvi faints. The local physician’s  (R. Balasubramaniam) son Manivannan (Sivaji Ganesan) attends to her and Selvi likes him.  Muthuvelar plans to get Selvi married to her maternal uncle Villavan (M.N.  Nambiar), commander-in-chief of neighboring country Kabalapuri’s army.

Nagavijayan (‘Pulimoottai’ Ramasamy) is the aged King of Kabalapuri, who scared of death, does not wish to fight with anyone. However, Raja Vadana (M.N. Rajam),  his ambitious sister is keen to get the two precious gems from Uraiyur for her throne and plots with Villavan to dethrone her brother.  Manivannan and Selvi fall in love and she tells her father about it but Muthuvelar disagrees.  Raja Vadana asks Villavan to get the gems from Muthuvelar. Villavan meets  Muthuvelar, agrees to marry Selvi in exchange for the two gems. Muthuvelar refuses, and when one of Villavan’s soldiers tries to remove it forcefully, he goes blind and Villavan swears revenge on Muthuvelar.  Muthuvelar on the recommendation of his spiritual guide, Chithar gets Selvi married to Manivannan and they lead a happy married life.

Villavan and Raja Vadana plan with MayaMohini or Mohini (T.R. Rajakumari), the court dancer to get the precious gems and threaten to destroy her beauty if she fails. Mohini arrives at Uraiyur and her beauty becomes the talk of the town.  Mohini is unwell and Manivannan goes to treat her and dazed by her beauty falls for her. At a dance program before the Goddess Kannagi, Mohini garlands Manivannan and Selvi is shocked. Manivannan takes Selvi’s bangles and gives them to Mohini and surrenders to her.  In a game of dice with  Mohini, Manivannan loses and signs a blank document to be a slave to the  Kingdom of Raja Vadana,  handing over all his wealth to her. The unconditional love of Manivannan melts  Mohini and she starts loving him.

At the same time, Selvi delivers a baby boy and longs to see Manivannan.  Villavan comes to know about Mohini’s love for Manivannan,  steals the blank document, and transfers all of Selvi’s wealth to Raja Vadana’s kingdom. Villavan takes possession of her palace, and Selvi out of love for Manivannan, leaves the palace with her father and newborn child. Muthuvelar dies of shock when they come to know that Manivannan is a slave and that all property is lost.  When Manivannan refuses to bring the gems, Villavan beats and throws him out. He is found by Selvi who comes in search of him as his father is in his death bed. She tries to take him home when Mohini demands a golden statue looking like Manivannan as compensation to send  Manivannan with her. Mohini takes her son as security until  Selvi brings the golden statue.

By the time they reach Uraiyur, Manivannan’s father dies, and Manivannan reforms. Chithar advises them to travel to Kabalapuri to earn money to make the golden statute.  Manivannan practices medicine in Kabalapuri and becomes a popular physician and makes money. He goes to attend to the King and comes to know that he has cancer and must be operated. Manivannan demands a golden statue if he cures him. Their conversation is overhead by Raja Vadana and  Villavan. Raja Vadana tells Manivannan to kill the King but he refuses.

Meanwhile, Mohini’s beauty is destroyed by Villavan and  Raja Vadana for not bringing the gems. Mohini comes for treatment to Manivannan and he refuses. On Selvi’s advice, he treats her. Mohini relieves Selvi from her promise to give a golden statute and also agrees to return her child.  Raja Vadana asks Manivannan to be her lover promising the kingdom but he insults her and she gets angry and swears revenge.  Raja Vadana cunningly puts poison in the King’s medicine  and when he dies Manivannan is arrested for murder. Raja  Vadana becomes the queen and tells Selvi that she will release Manivanna and also return her child if Selvi brings the two gems of Goddess Kannagi and Selvi agrees. Raja  Vadana asks Manivannan to be her lover and assures him to release if he agrees. Manivannan refuses and she gets angry and makes him blind. She also threatens to kill his family if he reveals the truth. Manivannan agrees to her condition to save his family. Selvi prays to Goddess Kannagi and brings the precious gems to Kabalapuri.

Selvi rushes towards her husband, who is on trial and finds him blind. She demands to know the truth from Manivannan  but he does not reveal anything. Raja Vadana accuses  Manivannan of the murder of the King and attempts to molest her. Mohini brings her child and the Queen tells the Court that that child does not belong to Selvi. Villavan strikes Selvi on her head and she falls down unconscious. Manivannan,  thinking Selvi to be dead, tells the entire story.  Selvi, who had regained consciousness, hears this and challenges the Queen to touch the two precious gems if she was speaking the truth. The Queen had no alternative but to touch the gems and there is an earthquake and the entire palace and the evildoers are destroyed. Selvi puts back Goddess Kannagi’s two eyes and answering her prayer,  Goddess Kannagi restores Manivannan’s eyes and the family is reunited. 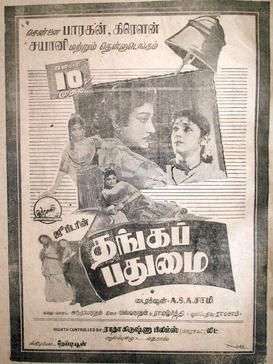 A S A Sami