(The story in a nutshell.)

The soil of Rajasthan has produced many great sons whose chivalry is unexcelled in the annals of the Indian history. The ‘Johar’ rite was performed as a last resort when there was very little hope of winning a battle against a powerful foe. All men preferred to die fighting and the women burnt themselves alive instead of surrendering their bodies to the enemy. It's a burning example of supreme sacrifice to the motherland. One such worthy son was Amar Singh Rathod.

Heir apparent Amar Singh met Chandravati, daughter of Hada Chief Jhujhargh, during a hunting trip. Her dexterity and courage attracted Amar Singh towards her and she too fell madly in love with him.

Amar Singh asked her father her hand in marriage. Although, he agreed, yet he set a condition. If he liquidates Salawat Khan, the right hand man of the Moghul Emperor Shah Jehan, he could win her hand. Amar Singh agreed and returned to Jodhpur to fulfill his promise. His stepmother, in the meanwhile, poisoned his father's ears against him. The relations of father and son turned sour and before he could tell his father about fulfilling his promise, he was asked to go and arrest notorious dacoit Zalim Singh which turned out to be a lifelong alliance. He had to leave Jodhpur forever.

Accompanied by Zalim Singh, Amar Singh went to live with his brother-in-law, Arjun Singh Gaud. Maghul Emperor Shah Jehan had heard of Amar Singh's chivalry and he called him at his court and appointed him as the commander-in-chief of the Moghul army.

Amar Singh got married to Chandravati but before the marriage was consummated, she reminded him of his promise to slay Salawat Khan. He was about to fulfill his promise when the Moghul Emperor ordered him to go to Kandhar to suppress a revolt. When Amar Singh Rathod returned victorious from Kandhar, the Moghul Emperor gave him a rousing reception.

This put fat in the fire. Salawat Khan was all burnt up at this honour. He managed to defame Amar Singh in the eyes of the Emperor. The Emperor believed what was told to him by the courtiers and fined Amar Singh a lac of rupees. Salawat didn't stop at this mean trick and he tried to harm his reputation further. This brought Amar Singh in open conflict. He chased Salawat Khan to teach him a lesson. But Salawat took shelter at the Moghul Court. Amar Singh slew him even there thus fulfilling his old promise.

The Guards of the Moghul court tried to arrest him but Amar Singh; riding his faithful horse, escaped by jumping from the high wall of the RED FORT. The horse died on the spot but Amar Singh reached his beloved's chambers. While he was engaged in the rituals of love-making, the Moghul Army surrounded his palace. Amar Singh faced the soldiers with courage. His brother-in-law (also a big officer in the Moghal Army), who had come to arrest him, advised him to surrender and promised him that he would see to it that justice was done to him at the Moghul court.

Amar Singh agreed and went away with him but before Amar Singh entered the gate of Fort. Arjun Singh Gaud, his brother-in-law, stabbed him in the back with his dagger.

Chandravati burnt here self alive with the dead body of her husband. What life didn't offer them, death did. It brought eternal reunion of two brave souls. 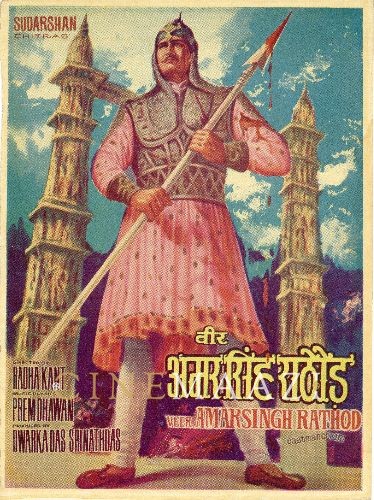