The Nawab of Arcot assigns the right to collect taxes and levies from the southern region to the British in lieu of the money he had borrowed from them. The East India  Company takes advantage of the situation and plunders all the wealth of the people in the name of tax collection. Many of the Polygars (rulers) submit with the exception of  Kattabomman (Sivaji Ganesan), ruler of Palayamkottai, and a few others.

Kattabomman lives with his wife Jakkamma (S. Varalakshmi), crown prince Oomathurai  (O.A.K. Devar), his wife (Ragini), and daughter Meena (Baby Kanchana) happily. In order to create unrest in his country, the British employ mercenaries to loot people. When his people complain, Kattabomman, his brother Oomathurai and Army Commander  Vellaiyathevan (Gemini Ganesan) go on a secret mission in the night, capture the British mercenaries and learn the game plan of the British.

This change is rejected by  Kattabomman.  Lord W.C. Jackson (Parthiban),  Collector of Tirunelveli, sends  Kattabomman a letter to meet him for refusing to pay his taxes for a long time and for not seeking a meeting with him  (as per protocol). Though reluctant,  Kattabomman goes to meet Jackson along with his army. When Jackson demands that Kattabomman come alone for the meeting at Ramalinga  Vilasam (palace of Sethupathi of  Ramanathapuram), he accepts. The meeting turns violent and ends in a skirmish in which Clarke,  Deputy Commandant of the Company’s forces, gets killed. Kattabomman and his men fight their way to freedom and safety, but Kattabomman’s minister Thanapathi  Sivasubramaniam Pillai (M.R. Santhanam), is caught and taken prisoner by the British. The Commission of Enquiry blames  Jackson for this debacle and he is relieved of his post, as the  Company’s plan (to take over the entire country gradually)  could be marred by Jackson’s fight with Kattabomman.  Thanapathi Pillai is released and returns to the kingdom.

Vellaiyathevan falls in love with Vellaiyammal (Padmini) after fighting with and controlling her bull. Coming to know of their love, Kattabomman gets them married.  Along with his goons, but without the permission of  Kattabomman, Thanapathi Pillai loots rice from the Srivaikundam warehouse of the British to tackle the local famine conditions.  In the skirmish, a British officer is killed. Ooshington, the new  Collector of Tirunelveli, writes to Kattabomman demanding that  Thanapathi Pillai be handed over to the British for this crime.  Kattabomman gets shocked with this act of Thanapathi Pillai,  which he considers as being criminal, but refuses to hand him over; instead, he offers them money as compensation for the looted material.

The Collector does not agree.  The neighboring Polygars are instigated to file a complaint alleging Kattabomman is looting their country to give the  British an excuse to wage a war against him. They comply and complain against him as advised by Ettappan. Major Bannerman  (‘Javert’ Seetharaman) takes charge of the army for the district;  he decides to fight with Kattabomman and to make him apologize for his mistakes. Ettappan advises Bannerman to attack Palayamkottai when the people are away, attending the  Tiruchendur Murugan festival so that Kattabomman’s army will not be alert. Sunderalingam (A. Karunanidhi), who comes in the disguise of a servant, learns of this plan and informs  Kattabomman, who prepares his army for battle.  Under Major Bannerman, the British army stands at all the four entrances of Panchalakurichi’s fort. When the fort’s southern doors open, Kattabomman and his forces audaciously attack the British stationed at the back of the fort.

After suffering heavy losses, the British retreat temporarily and wait for reinforcements and heavy artillery from Palayamkottai. At the end of the first day’s battle, Vellaiathevan is killed by a random bullet fired by a soldier; this affects the morale of Kattabomman and others. Vellaiyammal, who comes to the battlefield, hears about the killing of her husband,  takes revenge by killing the soldier who killed her husband, and then dies. Major  Bannerman now attacks the fort with heavy artillery and Kattabomman’s army suffers badly.  Sensing that his fort cannot survive a further barrage from heavy cannons, on the advice of Thanapathi Pillai, Kattabomman leaves the fort that night with his brother Oomaithurai. A price is set on Kattabomman’s head and people are advised against providing him shelter. When the soldiers surround one of the hideouts, Thanapathi Pillai comes out disguised as Kattabomman.  He is held and executed; his head is impaled on a bamboo pole and displayed at Panchalankurichi to demoralize the fighters.

Kattabomman hides in many places, including Thirumayam, Virachilai, and finally, takes refuge in the Thirukalambur forests close to Pudukkottai. The Collector orders Thondaiman, king of Pudukkottai, to arrest Kattabomman who is hiding in his kingdom. Accordingly,  Kattabomman and his brother are captured and their case is taken up. After a summary trial, Kattabomman is hanged unceremoniously from a tamarind tree in Kayathar (near  Thirunelveli), while Oomathurai is jailed. Though Kattabomman dies, the spirit of independence he created among his countrymen lives on and helps India in achieving freedom. 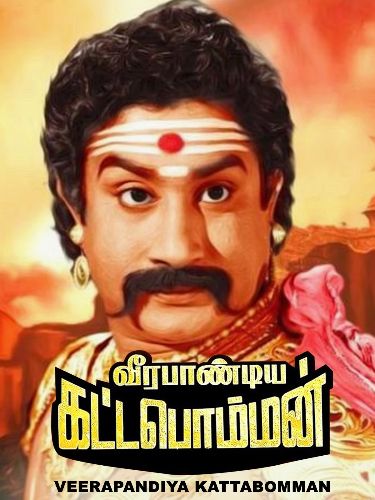 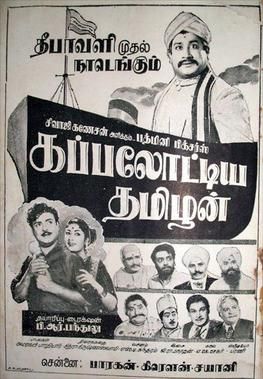 Kappalottiya Thamizhan (The Tamilian, Who Sailed the Ship)