Inspector Ramu (Gemini Ganesh) and Janaki (Devika) are married for ten years and have no child. Janaki's sister Radha ('Venniradai' Nirmala), who is childlike and innocent, lives with them. Janaki is constantly worried about Radha and protects her like a child. Janaki is close to Doctor. S.V. Lakshmi (S. Varalakshmi) and Lakshmi's son Manohar (K. Balaji) is a psychologist

Ramu's brother Captain Muthu (R Muthuraman) returns to Chennai. On the train, he meets Rani (Radhika), daughter of Bhoopathy Raja (V.K. Ramasamy), a local Zamindar. Rani, after reading about the bravery award conferred to Muthu, is attracted to him. Rani's cousin Mohan (Nagesh) likes Radha and she too likes his soft behavior.

On reaching home, Muthu is surprised to see the grown-up and beautiful Radha and is attracted to her. At the party hosted by Ramu for Muthu's achievement, Muthu scolds Radha for mingling with Mohan and Manohar, and Radha doesn't like it.

One day Muthu sees Radha whiling away time on the road and sends her home. While returning, Radha stops at Manohar's place where he tries a hypnosis test on her. Muthu who returns home realizes that Radha has not returned and goes in search of her. They find her chatting happily with Manohar and Janaki reprimands her.

Ramu and his family go to Kodaikanal for a short vacation. Mohan, Rani and her father join them. Janaki notices Mohan's interest in Radha and warns him. Muthu rejects Rani's advances and makes it clear that he loves Radha.

Janaki and Ramu decide to get Muthu married to Radha. Muthu is happy but Radha refuses to state that she cannot marry a person, who all the time scolds her. But both Janaki and Ramu go ahead with their plan.

Ramu leaves to Trivandrum to investigate a case. Janaki's friend Mala is critical and Janaki rushes to the hospital. Radha is alone and Muthu decides to make use of the opportunity and mixes sedatives in the milk. Radha drinks and falls unconscious. Muthu walks into her room that night. The next day he leaves for his army camp.

Three months pass by and Ramu returns home from Trivandrum. Meanwhile, Janaki notices changes in Radha's health and takes her to Dr. Lakshmi who confirms that Radha is pregnant Janaki is shocked and does not know who is responsible for it and informs Ramu about the pregnancy.

Ramu is excited to learn about the pregnancy assuming it to be Janaki's. Ramu's higher officials ask him to travel to London for an urgent investigation which he is unable to refuse and hence travels again.

Janaki decides to find out the person responsible for Radha's pregnancy. Janaki informs indirectly both Manohar and Mohan and seeks a solution from them. When she mentions that it is Radha who is affected, both of them suddenly leave.

Janaki takes Radha to their estate in Kodaikanal to avoid others knowing the truth. A local doctor Manjula attends to Radha there and she delivers a baby boy. In the process Radha also becomes normal and they return home.

Ramu returns from London and is excited to see his son, Babu with Janaki. She tries to tell the truth but he does not listen. Doctor Manjula from Kodaikanal comes to Chennai with her husband Chandran and visits Ramu's house. Manjula starts talking about Radha's delivery and Janaki stops her.

Muthu, who was in a state of shock in the army for a few months, gets discharged on the grounds of the medical condition. He does not reveal anything to Janaki and she suspects Muthu to be responsible. Chandran is Mohan's friend and he seeks his help for his register marriage with Doctor Manjula. Mohan tells him that he wants to get married to Radha and Chandran discloses the secret about her. Mohan meets Janaki and tells that he is innocent and that he doubts Muthu. Janaki shares her suspicion on Manohar.

Ramu decides to get Muthu married to Radha but Janaki seeks more time. Janaki finally agrees for the marriage but now Muthu refuses stating that he does not wish to marry the girl, who refused him a year back.

Mohan confronts Manohar about Radha's pregnancy. Manohar explains his innocence and reveals that Muthu had come home to get sedatives and after which he mentioned about a big mistake. Mohan informs Janaki and now she confirms that Muthu is the one.

At that time, Janaki gets a call from her friend Mala that Muthu is getting married to Rani at Tiruthani. Janaki rushes with Mohan to stop the marriage but it is too late. Janaki brings the newlyweds home.

At home, Rani treats the child badly and Radha slaps her. Rani feels that Radha is jealous of her getting married to Muthu and decides to leave. So Janaki sends Radha to her friend Mala's place.

Radha comes for Babu's first birthday function. Janaki takes her separately and scolds her for coming home when they still have no clarity about the father of the child. This is overheard by Ramu and he demands the truth from Janaki. Radha now confesses that Babu is her child. Ramu demands to know the father and Mohan and Manohar say that it was Muthu. Ramu, angry with Muthu, comes with his revolver and demands the truth.

Muthu finally reveals the truth about that night when he entered her room. Radha fell unconscious after drinking the milk and Muthu visited her room. He decides to take a medication to help him in this act and steps out. When about to take the tablet mixed in water, he hears a car, and assuming it to be Janaki he rushes into his room. But it was Ramu who had arrived and he drinks the medication thinking it to be water and enters Radha's room mistakenly. After a couple of hours, Ramu attends to a phone call which Muthu overhears. Ramu in a drowsy state comes out of Radha's room and informs Muthu that Janaki is sleeping inside and that he is leaving on work. So, it was Ramu, who was with Radha that evening and responsible for her pregnancy. Hearing this Janaki is shocked and gets a heart attack as she never expected this twist. She requests Ramu to accept Radha as his wife and dies. 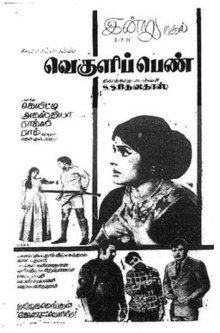