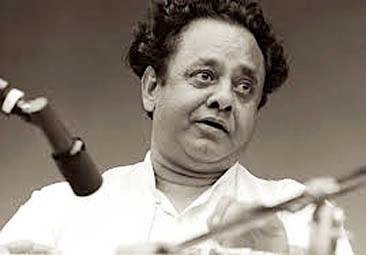 An accomplished tabla player, Ustad Alla Rakha Qureshi was a colossus of Indian classical music, naturally gifted with panache and virtuosity. He would coax the most elusive and delicate nuances from his tabla. The venerable master mesmerized western audiences with his percussive wizardry and extensive experimentation with fusion music both as an uncanny accompanist as well as a soloist. Hart, an authority on percussion in world music, once complimented "Allah Rakha is the Einstein, the Picasso; he is the highest form of rhythmic development on this planet." The playing of tabla was the only language he knew. His command of the tabla displayed through outstanding technique and tone production impressed both connoisseur and common people alike. Classical artists and rock stars sat at his feet to learn the intricacies of the sur and taal.

Alla Rakha Qureshi Khan was born at Phagwal (Jammu) on April 29 1919. Some sources quoted he was born in Gurdaspur but was raised in Phagwal. His father Hashmali was a farmer. The eldest of seven brothers, Alla Rakha was drawn to the performing arts as a child. His family was Muslim Dogras hence music and any kind of artistic activity were forbidden. His parents steadfastly opposed his inclination. In his early adolescence, after teaching himself rudimentary drumming and spending time in study with Lal Mahammed, he ran away to Lahore, where he met Ustad Mian Qadir Baksh Pakhawaji of the Punjab Gharana. So impressed was the Ustad that he took him under his wing. He learned Raag Vidya from Ustad Ashiq Ali Khan. Through skill and concentration, Alla Rakha developed the expertise to play nuances and bend the notes. Ustad Qadir Baksh, who had no son, formally adopted Alla Rakha and designated him as the next head of the Punjab Gharana. In 1936, he joined All India Radio, Lahore and after two years he was transferred to Bombay as a senior percussionist.

In the mid-1960s, the classical wizard, Allah Rakha became disenchanted with the film industry and he left that arena to concentrate fully on his love for tabla and Punjab Gharana. His name was twinned with sitar player Pt. Ravi Shankar and for decades both of them spread the gospel of Indian music globally. In the era of flower-power and the Beatles, their names became synonymous with Indian music. He gave legendary and spellbinding performances with Shankar at the Monterey Pop Festival in 1967 and the Woodstock Festival in 1969. With the support of Ravi Shankar, the two developed a concert repertoire wherein at times Qureshi’s powerful tabla usurped the spotlight. Rakha also collaborated with jazz drummer Buddy Rich on their 1968 album Rich à la Rakha, a pioneering experiment in the cross-cultural musical fusion. He also played as an accompanist for soloists like Bade Ghulam Ali Khan, Allauddin Khan, Vilayat Khan and Ali Akbar Khan to perform jugalbandis. He bridged the gap between Carnatic music and Hindustani music by performing with both renowned Carnatic musicians as well as Hindustani stalwarts.

Alla Rakha was bestowed with most prestigious awards Padma Shri (1977) and Sangeet Natak Akademi Award in 1982. In 2000, he was honoured with Chowdaiah Award for distinguished lifetime musicianship by the government of Karnataka. He founded the Alla Rakha Institute of Music, Bombay to elevate and popularize the art of Tabla playing.

He was married to Bavi Begum and they were blessed with three sons, Zakir Hussain, Fazal Qureshi, and Taufiq Qureshi; two daughters, Khurshid Aulia and Razia. His eldest son Zakir Hussain is also an accomplished tabla virtuoso.

He was stricken by a heart attack upon hearing the news of the death of his daughter, Razia. Allah Rakha breathed his last on 3 February 2000. Ustad Alla Rakha's father and grandfather, both soldiers may have chased enemies, but he pursued nothing but music all his life.