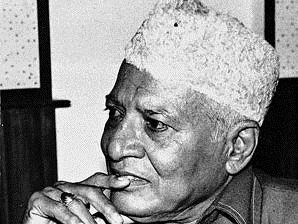 Anant Mane’s paternal uncle Dnyanoba Mane, popularly known as Mane Pahelwan, was a popular actor working for the Prabhat Film Company. It was, therefore, natural for the young school-going boy to be attracted to films. Soon he gave up schooling altogether and joined the Prabhat Film Company as an unpaid apprentice on 1 June 1930. For a year and a half, he worked in various departments, as was the practice at Prabhat, and was eventually made an assistant in the editing and direction departments where he had the opportunity to work under the legendary V Shantaram. Mane left Prabhat in 1943 and began to work as an editor with his former colleague and friend Raja Nene. During this period (1944-1949) he made a mark as a scriptwriter with Patthe Bapurao (1950). He also ghost directed a few films for a while, finally managing to make his official debut in 1948. He continued to work as an editor with the production company Alhad Chitra, which folded in 1953. He returned to direction and even tried his hand at production with Paidali Padleli Phule (1956), but none of these films made a huge impact at the box office. It was with the 1958 release Dhakti Jau, for which he turned director, writer and producer, that he gained recognition, bagging several accolades at the Maharashtra State Awards. The very next year his film Sangtye Aika (1959), he won critical and popular acclaim, with the film running for a stupendous 131 weeks at a single theatre. After this, there was no looking back.

In Sangtye Aika, Mane made extensive use of the folk form of tamasha laced with semi-erotic lavanis, a style that became the mainstay of Marathi cinema for decades to come. His 1968 film Ek Gao Bara Bhangadi starring Nilu Phule as a rogue politician also proved to be a trendsetter, creating a template for later films made on rural politics. Anant Mane died on 22 September 1995 in Kolhapur, leaving behind his invaluable contribution to the world of Indian cinema.